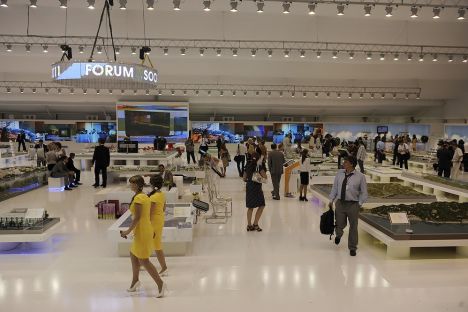 In a speech at the 10th annual Sochi International Investment Forum, the prime minister laid out the reasons why Russia is a great place to invest.

The Russian economy will recover from the current financial crisis in 2012. At least according to Prime Minister Vladimir Putin believes. At the 10th annual Sochi International Investment Forum, the prime minister told an audience that it is easier for Russia to cope with economic problems than for other, more developed countries because of their inflexible economic systems.

“It is obvious that the recent leaders are losing ground and can no longer serve as examples of a balanced economic policy, something they only recently were teaching us,” Putin said. “Moreover, the debt crisis in Europe and the United States is aggravated by their economies being virtually on the verge of recession. There is still no clarity regarding their recovery, which is unfortunate for all of us, including for us in Russia.”

At the forum, the prime minister stated that Russia’s growth rate this year will reacy 4 percent of GDP, and according to Andrei Khazin, a professor at the Higher School of Economics in Moscow, Russia will have no problems achieving this goal.

The Sochi International Investment Forum is one of three major economic forums held in Russia. Its main aim is to improve the investment climate and establish ties between Russian regions and local and foreign businesses. In addition, it is a venue for many regions and enterprises to present their products and projects. For instance, this year’s forum saw the unveiling of the Marusya super-car, a private helicopter made in the Republic of Bashkortostan and a passenger ship made in Tatarstan, to mention just a few. The forum was attended by delegations and representatives from 47 countries and 55 Russian regions. Thirteen regions presented investment offers to Russian and foreign businessmen.

“The consequences of the 2008 crisis were less severe for Russia than one might have anticipated,” said Khazin. “This is because reserves created in advance helped stabilize the situation and increase public spending, even as other countries were curtailing these programs. We did not plunge so deep and we are coping with the aftermath faster than the others.”

And yet, Ruslan Grinberg, director of the Institute of the Economy at the Russian Academy of Sciences, warns that Russia is too dependent on Western economies to be out of the woods just yet.

“One has to bear in mind that, unfortunately, we are hostages to the state of affairs in other countries. Our well-being depends on their well-being. This is not a metaphor but a direct link.  Because, if economic growth slows down dramatically—and it has already slowed down, causing grave concern—we will immediately feel the effect because we depend on oil prices,” said Grinberg.

This situation explains why the prime minister also noted that uncertainty about the state of Western economies does not bode well for Russia.

According to Putin, the internal situation in Russia will stabilize by next year by virtue of the following factors: the country’s foreign debt is no more than 3 percent of GDP and Russia’s reserves of gold and currency are the third-biggest in the world.

Even so, according to the experts, the economy is in for major changes. The state is slowly releasing some of its grip. Bureaucrats have already been pushed out of state-owned corporations, and the government is planning to sell part of its stakes in these corporations in an effort of raise money and to get these entities in private hands.

Khasin agrees that the leading role of the state in the economy is a hangover from the past and needs to be eliminated: “Russia inherited a dire legacy from Soviet times: More than half the GDP is generated by state-owned companies. Clearly, this impedes competition, spawns corruption and causes inefficiencies in running state-owned corporations. In my opinion, we need a massive privatization of the economy, including the basic sectors. Many companies in the natural monopolies sector must be privatized.“ Even so, it is difficult to predict what the outcome of a new round of privatization will be.