The Russian doctor who saved Bombay from plague 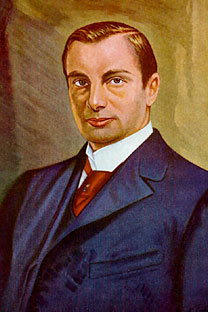 A Russian doctor came to India quietly in the late 19th century and developed a cholera vaccine that saved thousands of Indians from the deadly blight. A plague research institute in Mumbai has been named after the great doctor.

Tucked away in a corner of central Mumbai, amidst decaying 19th century buildings and industrial mills that have seen better days, is the Haffkine Institute for Research, Training & Testing. The institute, which started off as a plague research laboratory, is named after Dr Waldemar Mordecai Haffkine, a noble Russian scientist who saved thousands of Indian lives from the devastating epidemic.

Born in Odessa in 1860, Dr Haffkine was educated in Berdyansk and St Petersburg. He initially worked in Russia under renowned biologist Dr Ilya Mechnikov, who won the Nobel Prize for Medicine in 1908. It was, however, at the Pasteur Institute in Paris, where the Russian doctor made his first big scientific breakthrough.

With cholera pandemics sweeping parts of Europe and Asia in the second half of the 19th century, Dr Haffkine deployed his scientific ingenuity and managed to develop a cholera vaccine in 1892. What’s more, the good doctor risked his life by testing the vaccine on himself. Unfortunately, the medical establishment in Europe did not care to recognise this act of courage and achievement. Dr Haffkine, therefore, decided to move to British India, which was in the throes of several epidemics.

The cholera vaccine developed by Dr Haffkine in Paris was used in March 1893, when the Russian doctor fought what is described by the Haffkine Institute Mumbai, as a “lone battle” against cholera in Calcutta (now Kolkata).  Thousands were inoculated in Calcutta and the news about this benign Russian doctor spread across the country. He then spent a winter in Assam, inoculating workers in tea gardens. He also treated people in the Gangetic Plain, and often had to deal with reluctant patients, who were mostly daily-wage labourers. Inoculation against cholera produced a reaction that lasted for two days. This initially discouraged labourers who were reluctant to lose two days of pay. A report by Dr Haffkine’s colleague cited by the American Society for Microbiology showed that the mortality rate among those inoculated in Assam’s tea gardens was as low as 2 percent, compared to 22 to 45 percent among those who weren’t inoculated.

The next stop for Dr Haffkine was Bombay (as it was known then), which was battling the bubonic plague. The city’s governor Lord Sandhurst invited the Russian doctor to come to the city and work on the plague vaccine.

The plague created panic in Bombay and official figures cited the number of plague-related deaths in the city between October 1896 and January 1897 at 3148. The British panicked during the plague and used the “sanitarian” approach, where they scoured Bombay for daily plague cases, dumped any “native” suspected of having the plague in a hospital, put all of their family members in “segregation camps,” while washing their walls and drainage lines with lime. This was probably the first trial run of the usage of concentration camps by the British, according to Dr Kalpana Swaminathan, an orthopaedic surgeon, who is the co-author of “The Quarantine Papers,” a book that evokes the agony of Bombay during the days of the plague. The British went as far as dragging people out of local trains and arresting any “native” who took the main north-south road and sent him off to the camp, if he didn’t have a pass.

According to research conducted by Edythe Lutzerkand and Carol Jochnowitz for the American Society for Microbiology, Dr Haffkine felt the British attempts at disinfection were “hopelessly inadequate to the epidemiological realities of plague, and therefore, ultimately futile.” He was also upset by the misery and upheaval that the segregation camps caused the residents of Bombay, who were “far more terrified of camps and hospitals than they were of plague.”

With death-toll mounting and panic spreading across Bombay, Dr Haffkine and his Indian staff had to act fast. They worked for three months before a breakthrough. It was the usage of unconventional methods that finally led to the vaccine being invented. “Experiments are being made in my laboratory with regard to the growth of plague microbes in or particular product of milk, largely used by the native community - ghee or clarified butter,” Dr Haffkine told the Indian Plague Commission. “The addition of ghee to artificial cultivations increases greatly the fertility of the medium, but we are investigating now to what extent the microbes grow in ghee itself, in the form in which it is used for food.” These experiments worked and Dr Haffkine tested the plague vaccine on himself, before inoculating patients in the city. According to Lutzerkand and Jochnowitz, Dr Haffkine subjected himself to “fourfold auto-inoculation and experienced a painful week of febrile reaction,” before announcing his findings to the authorities. Volunteers from the Byculla jail were inoculated with the plague vaccine. While 7 members of the control group died, it was said that the vaccine reduced risk by up to 50 percent.

The doctor‘s empathy with the “natives” didn’t endear him to the colonial power. In fact, repeated pleas to the British to suspend segregation orders and travel restrictions for those who had been inoculated fell on deaf ears.  He worked on anti-plague inoculation around Bombay for the next five years, but the British were eager to get rid of him from the city.  He spent the last eight years of his professional life in Calcutta as an independent researcher for the Indian government. Most of his ideas, including a call for the preservation of the anti-rabies sera, were rejected by the authorities.

The 55-year-old Haffkine left India in 1915 and spent most of the remaining 15 years of his life in France. It wasn’t until 1925 that the institute where he worked in Bombay was renamed in his honour. He died in 1930 in Lausanne, Switzerland. While the prevailing anti-Semitic climate in the Czarist Russia prevented him from being hailed as a national hero at that time, his vaccine saved thousands of lives during a cholera epidemic that gripped the Russian Empire in 1898. But recognition eventually came to him in many different ways. Dr Joseph Lister, the father of modern sterile surgery, lauded Dr Haffekine as “a saviour of humanity.”