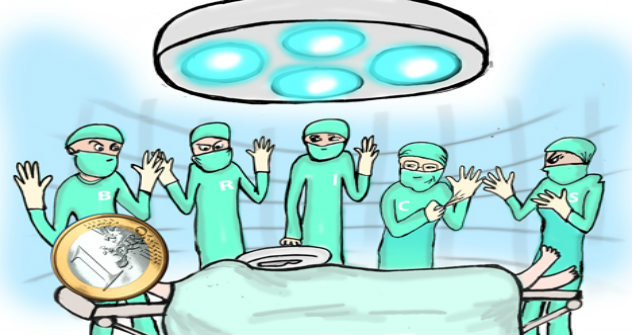 The BRICS’ big moment is finally here. In a dramatic reversal of fortunes, Europe, which had vigorously objected to greater voting power for emerging economies in the International Monetary Fund (IMF), now finds itself seeking a bailout from the BRICS to stave off the worst crisis to hit the euro zone.

With over $4 trillion in reserves, the world’s biggest emerging economies – China, Brazil, India and Russia - may well prove to be Europe's saviours. It’s, however, not clear what form this rescue package will take with reports of differences among BRICS countries about the risks of a support package for PIGS (Portugal, Ireland, Italy, Greece and Spain) countries which have plunged the European economy into a deadly downward spiral, but the symbolism of the potential BRICS’ bailout is not lost on watchers of the international scene.

Against this backdrop, finance ministers and central bank governors of the BRICS nations met in Washington recently and asked the G20 nations to act swiftly to ease the euro zone debt crisis, and warned that the failure to act in a coordinated way could lead to a repeat of the 2008 global financial crisis. They also said they are considering providing money to the IMF or other global financial bodies to increase their capacity for combating financial crises.

Keenly tracking the euro zone crisis, the emerging economies fear that the festering stagnation in the US and Europe could negatively impact the developing world across Asia, South America and Africa. “There is a risk that the sovereign debt crisis of some countries becomes another financial crisis,” warned Brazil's Finance Minister Guido Mantega.  Keeping this in mind, the BRICS ministers called for the World Bank to mobilize more resources to increase their assistance to developing countries. Most important, they seized the opportunity to ask the IMF to speed up quota and governance reforms. “We must also move ahead with the comprehensive review of the quota formula by January 2013 and the completion of the next review of quotas by January 2014," said the economic leaders of the five countries said in a joint communiqué. "This is needed to increase the legitimacy and effectiveness of the Fund." In 2010, the 187 member nations of the IMF and the World Bank had agreed to shift quota from advanced economies to emerging market and developing economies.

The increased assertiveness of BRICS in the wake of the euro zone crisis has stirred speculation about the BRICS countries trying for a grand bargain with the developed countries in return for bailout. After all, the memories of the IMF dictating punitive structural adjustment programmes to the global south are still fresh in their minds. For example, will India and Brazil demand a permanent seat in the UN Security Council for saving the euro zone for catastrophe? Or Will China seek a greater role for itself in Bretton Woods institutions? These questions remain speculation at best, but the very fact that these questions are being posed shows the emergence of BRICS as a formidable global force in a rapidly mutating international order, marked by a tectonic shift of power from the West to the East and from the North to the South.

In nearly three years since Russia hosted the first BRIC summit in Yekaterinburg at the peak of the global economic crisis in June 2009, the BRIC, a term coined by Goldman Sachs’ Jim O’ Neill in 2001 to denote the world’s fastest emerging economies, has evolved into a powerful grouping united by the overarching design to shape a post-crisis economic architecture and a greater say for emerging economies in global decision-making institutions that has long been the preserve of the triad of the United States, Europe and Japan. The BRIC turned into BRICS when South Africa, African continent’s largest economy, was formally included in the grouping at the Sanya summit in China in April 2011. In fact, the creation of a multi-polar, equitable and inclusive international order, reform of Bretton Woods institutions and enhancing the voice of emerging and developing countries in international affairs have been key themes that resonated through all the three summits held in Yekaterinburg (2009), Brasilia (2010) and Sanya (2011). “We should join hands in ensuring a peaceful and orderly transformation of the world order that reflects contemporary and emerging realities. This should be the case whether it is the reform of political and security governance structures in the United Nations or the international financial, monetary or trade system,” said Indian Prime Minister Manmohan Singh at the Sanya summit while encapsulating the strategic and economic importance of BRICS.

Besides their rising strategic profile, the BRICS countries, which comprise 300 million people or nearly half the world’s humanity and account for 21 per cent of global GDP, have decided to expand their quadrilateral cooperation across diverse fields, including trade, security, energy and culture. The action plan entails, among other things, regular meetings of foreign ministers on the sidelines of the UNGA, senior officials on security issues, trade ministers and health ministers.

When O’Neill coined the term BRIC in 2011, he did not realize that the change would happen so fast. One decade later, China is the world's number two economic power, while Britain has dropped out of the top five, overtaken by Brazil. The economies of India and Russia are growing fast. South-South business and multilateralism has acquired a new resonance.  Stephen Jennings, the CEO of Moscow-based investment bank Renaissance Capital, predicts more and more big "south-south" business deals now struck in developing nations. “The traditional financial centers and Western economic model are losing their pre-eminence," Jennings said in a speech to investors in Moscow in June. "There is a gravitational shift of business, capital and ideas toward emerging market economies. fast-growing economies, including Russia, are becoming the leaders of the new economic order."

The diplomatic pecking order, too, has changed with BRICS being often compared to a parallel G7 or a competitor to the developed countries club and it’s unthinkable to do any major global deal on trade negotiations or global change without BRICS on board.  All the five BRICS countries are concurrently on the UN Security Council as permanent and non-permanent members.

“By strengthening the economic framework of the multipolar world, BRIC countries are objectively contributing to creating conditions for strengthening international security,” said Russian President Dmitry Medvedev.  When the Copenhangen climate change negotiations were floundering in December 2009, U.S. President Barack Obama went into a huddle with leaders of BASIC countries comprising China, India, Brazil and South Africa. And now, the festering euro zone crisis is set to hasten the global redistribution of power and the rise of BRICS, the offspring of the 2008 global financial meltdown.

Manish Chand is Senior Editor with IANS and a New Delhi-based writer on international affairs.