United by our past, we will tackle the future together 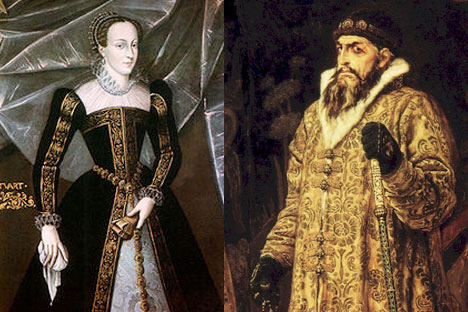 Mary I of England and Ivan the Terrible of Russia

The relationship between our countries originated in hard times for both Russia and Great Britain during the rule of Ivan the Terrible and Mary I. That time happened to be bloody for the two countries in their own ways.

Since then, we have been together virtually at all critical junctions in European and world history. Whatever differences might have divided us in the past have either been resolved or have faded into insignificance. I am sure that this is also going to be the case now that we are witnessing the birth of a new world.

At the start of the 19th century, England was waging war on the peninsula, defending not only her interests but also the right of European states to determine their own destiny. The same was true of Russia acting in the east of the continent, which Dominic Lieven gave a brilliant account of in his recently published Russia against Napoleon. We were also allies in both the world wars. Recently in Arkhangelsk, we marked 70 years since the arrival there of the first Arctic convoys in Operation Dervish. Thus, together we more than once managed to frustrate attempts at coercive unification of Europe making possible its peaceful unification in the 1950s.

Celebration of the 70th anniversary of Arctic Convoys in Arkhangelsk, in September 2011.

Another thing we have in common is that we both know the price of an empire and of upholding the geopolitical configurations of the Cold War times. Both have been replaced by mutually advantageous forms of co-operation and integration. We also know the price of internal upheavals; the universal truth that nothing positive can originate from chaos, violence and rampant anarchy; that the most productive way of development is evolution, the gradual build-up of positive change. Which, in its turn calls for moderate, I’d say, conservative policies, insofar as they are guided by common sense.

Precisely for this reason we sympathized with the British when a wave of riots swept through England and Wales. We understand the urge for restoration of traditional moral values in society too, including common decency and responsibility. It is the honest policies of the coalition government in socio-economic matters that appeal to us. They are based on a realistic assessment of the situation, free of pretence and self-deceit, upon the realization that the only way to a decent independent national existence lies through living within one’s means.

I am convinced that the global crisis, which is far from over, puts all the priorities in national and global politics in their proper places. The issue of ensuring domestic progressive development as a vital strategic resource come to the forefront in this year’s “Strategic review” by the International Institute for Strategic Studies. The complex and profound nature of brewing changes indicate that we are all facing a transformational challenge. Hence emerges the need for complex modernization. And yes, Francis Bacon was quite right when he said: “Great changes are easier than small ones”. Some grasped this idea before others and embarked on the path of radical changes earlier, some did it later.

Under these circumstances it is only natural that the most dynamic area of Russo-British co-operation is to form economic ties through trade and investment. Not to speak of the fact that historically our relationship started with trade.This not only secures the stability of our relationship as a whole but also make us partners in fostering the prosperity of our respective nations according to the dictates of our time, first and foremost by way of co-operation in the sphere of innovation. This is why Prime Minister David Cameron and President Dmitry Medvedev signed the declaration in Moscow on a knowledge-based partnership for modernization on September 12.

By the way, we remember that the first timepiece on the Kremlin’s Spasskaya Tower was mounted by English master builder Christopher Halloway. In this respect our foreign policies correspond to the vital interests of our citizens who are interested in the creation of new jobs and the raising of living standards. The heads of our states unanimously agreed on this during their recent talks.

Russia and Great Britain also actively engage in international cooperation in various multilateral formats, being two of the five permanent members of the UN Security Council, members of the G8, G20 and many other international organizations. We have achieved mutual understanding on many pressing issues on the global agenda.

Our opinions on tactics may diverge but we rarely fail to agree when it comes to the vision of strategic goals of the international community in specific matters. One is glad to realize that now that the Arab spring enters its eighth month we are witnessing a considerable convergence in our approaches to a whole host of the current Middle East issues, including the Israeli-Palestinian settlement and Libya.

It is hard to overestimate the role of our countries in European and Euro-Atlantic politics, including Russia’s relations with the European Union and NATO. Of no less importance is our mutual contribution to countering global challenges and threats such as international terrorism, drug trafficking, organized crime, non-proliferation and nuclear safety, climate change and global poverty.

Our long-standing ties have a sound cultural dimension to them. Among the names that personify the profound mutual enrichment of our cultures are those of Charles Cameron, who built Pavlovsk for Catherine II. The famous Cameron’s Gallery entered Russian poetry (for instance, it is mentioned in Akhmatova’s Poem without a Hero), becoming a symbol of the influence that great styles of European cultures had upon Russia. The whole of Saint Petersburg is an eloquent testimony to that.

Thanks largely to culture, the intellectual and political tradition of Anglophilia was born. Adherence to Anglophilia in Russia gave the world such a literary phenomenon as Vladimir Nabokov (who was well known for his mastery of the English prose style). It is rooted not only in our admiration for British common sense but the influence goes much deeper. The genius of Alexander Pushkin, with which Russia responded to Peter the Great’s challenge of modernization, made this influence a part of the present-day Russian language and the way we feel about the world. We admire Shakespeare as if he were a Russian author thanks to brilliant translations of his works. What other language could have treated a foreigner with such awe and tenderness?

It was a two-way influence. Who else could have immortalized the tragic pages of the British historic experience the way Alexander Pushkin did in his Feast in Time of Plague, which contains one of the author’s most poignant and profound pieces of poetry calledOde to Plague? Who could have made a better film version of Sherlock Holmes? The almost two-century-long affair of many British people with Leo Tolstoy and Fyodor Dostoyevsky, as well as their admiration for Anton Chekhov, testifies to a profound mutual influence of our cultures that have been able to transcend time in their pan-humanism. Appreciation by the British public of Vassily Grossman’s Life and Fate speaks volumes on that too.

I am convinced that our bilateral relationship, cleansed of old-time suspicion and ideological prejudice, and underpinned by enlightened self-interest is consonant with the spirit of the times and is in for a bright future. Its further strengthening will not only serve the interests of our two nations but it will also benefit the whole of Europe and the rest of the world.

Alexander Yakovenko is Ambassador of the Russian Federation to the United Kingdom and Northern Ireland. Prior to his appointment to London he was deputy foreign minister of Russia for five years.