Why you should lose your dollars 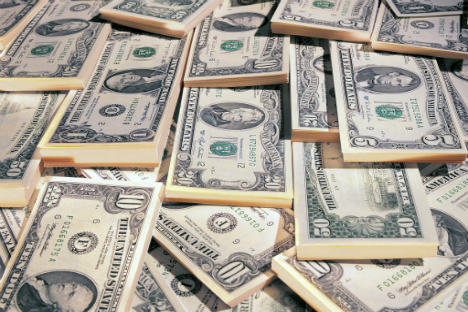 Use them or lose them, but don't keep your American dollars too long. The American dollar is the most misused currency in the world, as its unrestrained printing has ensured prosperity for a few and troubles for just about everyone else on the planet. That era is coming to an end sooner than you think.

The United States has made a Faustian bargain with its central bank, the Federal Reserve. Established in 1913, the Fed has become a law unto itself, spewing financial toxin into the global markets in the form of trillions of American dollars not backed by any economic activity. This unchecked printing of currency has in no way benefitted the majority of Americans, but it has generated immense wealth for a clique of bankers, currency speculators and other Wall Street squatters.

But like any Faustian bargain, there comes a time to pay up. And that time is now.

No other country in the world can get away with the currency debasement and other illegal monetary acts the US practises. How the Federal Reserve games its own Treasury sales is the elephant in the room that the mainstream media has ignored.

Flashback to 2005. Back then, the three countries that were the leading buyers of US Treasury securities were Japan, China and Britain. According to figures released by the US Treasury Department on its website, between January 2005 and March 2005 Japan and China virtually stopped buying US treasury bonds. This was unprecedented because both countries have a voracious appetite for the American currency. In fact, in the 12 months from January 2004 to January 2005, Japan’s holdings went up from $583.2 billion to $679.6 billion while Chinese holdings increased from $156.2 billion to $223.5 billion.

For Washington the three-month holiday by its two leading buyers should have been a nightmare. Not only was it a sign of flagging investor confidence, it could have also led to a credit downgrade (which eventually happened in August 2011). But out of the blue came mysterious new investors, who picked up $43 billion worth of paper. The Fed identifies them only as “Caribbean banking centres”. Sidekick Britain pumped in another $23 billion.

A similar act was played out a few months later. In July 2005, the United States falsely accused Venezuela of supplying arms to South American guerrillas. Despite strong denials from Caracas, Washington ratcheted up the pressure. Influential televangelist Pat Robertson jumped into the ring and accused Venezuelan President Hugo Chavez of funding al-Qaeda’s nuclear weapons programme, and called for his assassination by US forces. Besides the supreme irony of a self-proclaimed man of God publicly advocating a democratically elected leader’s murder, the accusation sent the American media into a frenzy. As the rumour gained legs, Washington threatened Venezuela with sanctions.

Now one thing the Venezuelan leader is not is predictable. The charismatic Chavez, in a startling act of defiance, liquidated $20 billion in US Treasury securities.

However, more curious than Chavez’s move was the fact that the anticipated plunge in the dollar did not materialise. That’s because yet again other buyers led by the ‘Caribbean banks’ made up for the shortfall, in the process suffering huge losses.

While Britain’s purchases may be dismissed as America’s assistant doing its master’s bidding, the identity of the Caribbean banks remained a mystery. Just who were these people with deep pockets that they were able to prop up US Treasury securities?

The financial press speculated they were offshore hedge funds, but if hedge funds had lost billions of dollars, there would at least be some market reaction. But no, like at those shadowy Caribbean banks, it was business as usual in Wall Street.

Arthur Conan Doyle, the creator of Sherlock Holmes, famously wrote that once you eliminate the impossible, whatever remains, no matter how improbable, must be the truth. As no corporate entity can afford billion dollar losses, and Britain’s purchases are accounted for, so the only suspect left is the US itself.

Analysts have long suspected that the US Fed uses newly-printed dollars to buy back its own securities as well as those dumped by foreign governments. This is not as farfetched as it sounds; such a parallel exists in the corporate world where rogue companies are known to use one or more proxies to buy their own stock to drive up the price.

Unlike stockmarket shenanigans, which mostly impact a limited universe of shareholders, the US Federal Reserve’s unbridled printing of money will eventually inflate away the value of dollar holdings. It is worth mentioning here that there are at least three times as many dollars floating around the world as in the United States.

There is another more menacing aspect to this. As the Fed expands the money supply, it puts pressure on other currencies to appreciate. This forces central banks in other countries to expand their own money supplies to depress their currencies. The end result is inflation worldwide.

So why don’t central banks – and indeed other investors –pull the plug on the dollar?

There are two chief reasons. One: the difficulty of disposing of holdings. Dumping dollars on world markets will only depress its value further, thereby eroding the value of national reserves. China and Japan hold a combined total of over $2 trillion in US Treasury bonds. Even if a quarter of these bonds are cashed up, the value of the rest will witness a meltdown.

Two, in a world beset by multiple uncertainties the dollar is a safe haven. The US government has a history of honouring its obligations, even if by printing more dollars. While the currencies of other nations are backed by their foreign exchange reserves, the US dollar is secured only by the promise to print more dollars. Strange, but true.

But as they say, nothing grows to the sky, not even America. In November 2009, the International Monetary Fund announced the sale of 200 metric tons of gold to India's Reserve Bank for $6.7 billion. While the immediate impact was that gold prices shot up to an all-time high, the move was India’s plan to diversify its US dollar holdings.

The Chinese have belatedly realised that despite owning so much US debt, they don’t have a lot of flexibility. The US continues to prosper in debt while Beijing is stuck with over $1 trillion worth of paper that is eroding in value even as you read this.

It is, therefore, not a coincidence that the amount China plans to invest in bullion is exactly $1 trillion.

As for the safe haven status, that is also eroding because of the following reasons: US debt has attained gargantuan proportions (75% of GDP); the deficit is a trillion dollars; and the US is acting like a failed communist state by frittering away its income on corporate bailouts.

The decision to offload dollar holdings will always be a political one. Whether it is Moscow, Mumbai, Tokyo or Beijing, no leadership would like to be seen as torpedoing American chances for an economic recovery, especially during a prolonged recession. A complete halt to purchases of Treasuries is, therefore, unlikely.

However, markets operate on sentiment and goodwill. While the goodwill is long exhausted, the verdict is that the market’s infatuation with the greenback is also wearing off. Therefore, without its dollar printing franchise, the wheels will start falling off the United States.

In the meantime, here’s a tip: lose your dollars.