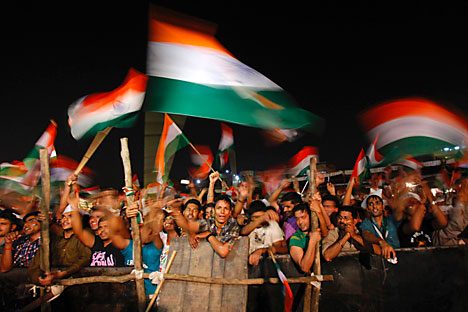 An appeal to the civil society ideas is one of the key trends of the present time. The events of 2011, first of all, the “Arab Revolutions”, have aroused interest in the theory and practice of this phenomenon. After all, the “Arab Spring” has come to the region, which was perceived as an embodiment of political “stability” or social “stagnation”.

The recent events in the Arab East seem to confirm the ideas suggested by a Russian philosopher Yury Krasin about polyvariant civil society and democracy in the modern world. According to the scientist, “oriental countries… have faced the “inversion” of social and political development, and the institutions of democracy appeared earlier than a corresponding civil infrastructure did”. Further, Krasin writes: “the English ethnologist with Czech origins Ernest Gellner believed that other (i.e. non-western. – A.V.) civilization areas widely use the alternatives of a civil society: Shariat, patrimonial and clannish relations. Most likely, this is a delusion. But it implies a real problem consisting in the peculiarity of manifesting the energy of public self-activity in various civilizations. It is relevant not only to the process of civil society and democracy establishment, but also to the final results of this process”.

By civil society, we usually understand public space where the economic and political interests of various communities are formalized, formed and articulated, such events as ideology and politics acquire their specific contours. In other words, civil society appears as a social infrastructure of politics, a complex of interests, where the dynamics of their interaction ensures the reproduction of political relations.

The modern world has various actual functioning models of civil society reflecting different interactions between the population and the authorities, social structure and political relations in various civilization media. In the specific forms of its existence, civil society acts as an objective and a key mouthpiece of public and state interests.

The very fact that the civil society topic seems to have been acquiring the “second wind” in recent years among the social ideas and in the social practice of most states in the world apparently has the following reasons.

First, politics is turning into the most large-scale public phenomenon of the present time; the citizens of developing countries are trying to conceive their interests from the position of restoring equality and “putting the historical record straight” in the world system, transform the global politics into a “world concert” that implies no division into “big” and “small”, “the few” and “outcasts”.

Second, the vacuum that appeared in the world system due to the disintegration of the Americano-centric world order (“the unipole”) is actively filled in by China, Brazil, India, Indonesia and other extra-large and large countries. These states defending the ideas of the multiple models of civil society consistently stand for the new world space organization based on polycentrism and the principles of “unity in variety”. For these states, establishing a civil society is equal to creating social and political conditions for sustainable development. This implies: 1) economic growth, 2) maximum possible employment of the population and 3) relatively even distribution of the national income (“growth with equity”, as they call this phenomenon in India). In other words, the ruling circles of this group of countries believe that the development of social democracy should precede the establishment of political democracy.

Third, the process of forming “new regional leaders” has accelerated in the world politics. This group usually includes: Argentina, Venezuela, Egypt (the revolutionary events at the beginning of 2011 have activated the search of a new foreign policy paradigm of this country), South Africa, Nigeria, Turkey, Iran (subject to certain reservations) and some other states. The “new regional leaders” emphasize their loyalty to the civil society principles. In the world politics, these principles are synonymic to the affirmation of the equal status of these countries in relation to the “traditional” centers of the world economy (USA – Western Europe – Japan) in taking crucial foreign policy decisions. Moreover, some “new regional leaders” (in particular, Egypt and Turkey) appeal to the ideas and values of civil society in order to bring the role of the military in the corresponding country societies in line with the constitutional framework.

The civil society topic is actively used in the international relations by western countries, as well. Some experts say that “civil society” has become an important element of the ideological struggle of the “golden billion” against “others”, especially those countries whose leaders pursue domestic and foreign policy independently from the West. At the same time, the USA and their strategic allies act in the international information space in several directions.

1. The civil society ideas are claimed to be exceptionally “liberal”, i.e. western, in terms of their historical and socio-cultural origins. This gives rise to the categorical rejection of all other versions of democracy (“non-liberal” ones). The meaning of this policy is the US and the West striving to preserve the leading positions of “the North Atlantic civilization” and related states in the rapidly changing world.

2. Control over China, Russia and other extra-large countries is still the priority goal of the American (and “western” in general) foreign policy. Apart from military and technical (creating the “futuristic” armament types and platforms) means of “deterrence”, the United States are actively using ideological and political methods of influence, in particular, the deliberately accentuated range of civil society problems.

Such campaigns are regularly held with regard to Russia (“violating human rights”, “political pressure upon the opposition”, “unjustified use of force in Caucasus”, “excessive violence” towards the “prisoners of conscience”, etc.) and China (“suppressing protest movements” in Tibet and the Xinjiang Uygur Autonomous Region, “witch-hunt”, “restricting political rights and freedoms” of the citizens of the People's Republic of China, etc.). One can obviously notice the desire of the ruling elite of the West to discredit Russia and China with the help of the world information space, thus forcing these countries to adopt a “conformal” towards America and the West in general foreign policy behavior.

3. The step-by-step loss of geostrategic positions in the key regions of the world by the West, and first of all – by the USA, especially in the Arab East, leads to the activation of its political and propagandist impact. The importance of “educational work” was illustratively demonstrated during the Arab Revolutions of early 2011. However, it has revealed the obvious logical inconsistency of the “North Atlantic society” in evaluating the “democracy” and “civicism” of the political regimes of the region. Apparently, this evaluation depends on the two main circumstances that determine the geopolitical behavior of the USA in the Arab East. First, the concept of the US “absolute energetic invincibility” adopted as far back as the F.D. Roosevelt’s presidency implies the defense of “petroleum monarchies” (Saudi Arabia, Bahrain, etc.), and also the obvious indifference of Washington towards the civil society condition and situation with human rights under paternalistic and authoritarian regimes. Second, the North Atlantic political elites act from the positions of “bloodthirsty humanism” towards those states that pursue independent from the West policies (in particular, Libya and Syria) by actively supporting forces, which are hostile towards the ruling regimes.

The redistribution of forces in the world politics, shifting the geopolitical “axis” to the east, to the Asia-Pacific Region – these and other factors objectively enhance the importance of ideological methods of impact by the West on the international public opinion. Russia inevitably finds itself within the theater of such propagandist campaigns. In this connection, there is a two-in-one question: which is the best way to resist the “ideological struggle” initiated by the USA and its closest strategic allies in the modern international relations? Which are the best ways to use the system of foreign policy relations of our country for the active positioning of Russia in the civil society space, institutions and practices? The following initiatives look expedient.

1. The upcoming election cycle of 2011-2012 will become a certain test for Russia determining the viability of its civil society institutions and practices. However, it is easy to predict both the backdoor pressure of the West upon the Russian elite and the severe – through international digital mass media – criticism of Russia for “manipulating” the election process and civil society institutions. In these conditions, the political elite of the country will have to gradually develop the institutions of political representation, including those at the “micro-level”, i.e. at municipal establishments. Persistent work in this direction together with the systematic restrictions of virtually uncontrollable local bureaucratism “from above” will invariably limit the external criticism of Russian authorities.

2. The Russian diplomacy needs permanent coordination of efforts with China and other countries exposed to the ideologically motivated pressure from the West for “violating human rights”. This coordination should have the purpose of giving international publicity to the true motives of such propagandist activities. The Russian diplomacy has already significantly advanced in this direction of foreign policy. However, there is a need to scrupulously reveal the facts of “dual standards” presence in the activities of the USA and their allies and demonstrate their logical inconsistency, which, in fact, returns mankind to the sad traditions of the cold war and severe ideological opposition in the international relations.

3. Objectively, i.e. in terms of economic, political and socio-cultural indicators, Russia belongs to the cohort of “non-liberal” developing democracies. Therefore studying the experience in forming civil society institutions in India, Brazil and other countries facing a drastic economic growth is becoming a priority objective for not only Russian social sciences, but also for our diplomacy. The close coordination of the activities of social scientists from these countries will help the diplomatic service of Russia protect the interests of our country in this new and quite sensitive direction of its foreign policy activities.

The range of civil society problems represents a serious foreign policy challenge for Russia, and the Russian diplomacy can and should give a creative response to it.