Civil unrest on the agenda 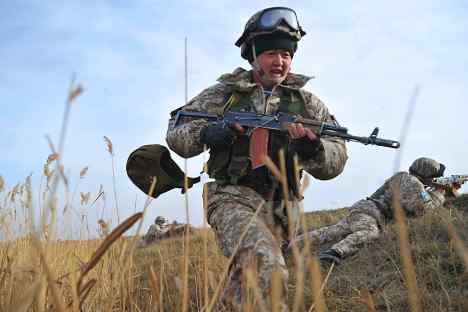 Events in the Middle East force Russia and the former Soviet Republics to consider reforming the CSTO, which was set up in another era.

The Collective Security Treaty Organisation (CSTO) was formed in 1992 with the main aim of protecting its members, Armenia, Belarus, Kazakhstan, Kyrgyzstan, Russia, Tajikistan and Uzbekistan, against external threats and international terrorism.

THE FACTSA fast and effective reaction

The Collective Security Treaty Organisation consists of seven states: Armenia, Belarus, Kazakhstan, Kyrgyzstan, Russia, Tajikistan and Uzbekistan. The Collective Rapid Reaction Forces in the CSTO total about 20,000. According to the charter of the organisation, the CSTO may use force to repel direct military aggression, for counter-terrorist operations, and to combat drug trafficking and organized crime. From September 21 to 26, CSTO forces conducted large-scale strategic exercises, involving armoured vehicles, aircraft and warships. Commenting on the training exercises, Russian chief of general staff Nikolai Makarov said that the CSTO forces were working with crisis situations similar to the recent events in the Middle East and North Africa.

Nearly 20 years on, experts say it no longer fully satisfies any of the organisation’s member countries. The issue of reform has been on the agenda at every CSTO summit. But following last year’s revolution in Kyrgyzstan, the discussions have gained momentum. The main question is whether, in the event of a similar uprising, the organisation should defend the existing regime and intervene directly in the conflict. But the organisation does not have such powers. Leaders of the CSTO were reminded of the need for reform in the midst of the Arab spring. At the August summit, Belorussian president Alexander Lukashenko, who is the current CSTO chair, confirmed to journalists that the leaders had spent most of the time discussing how the CSTO might help them avoid the experience of their colleagues in Tunisia, Egypt and Libya. The chair of the CSTO rotates but Russia has always been the real leader. Which is why the Russian Institute of Contemporary Development (Insor) has produced a report dedicated to the reform of the CSTO. The head of the institute’s board of trustees is President Dmitry Medvedev, and this is by no means the first report that the organisation has delivered to the Kremlin.

Permanent representative of the Russian Federation to NATO on the challenge the CSTO is expected to face after american troops leave Afghanistan “We will be ready for any eventuality. Russia understands it must not only protect itself but also extend the scope of this protection to the countries of Central Asia. It is precisely in these countries that Islamic radicals need to be stopped, so they do not come to Russia and commit more atrocities. I think it will be a ‘moment of truth’ for the CSTO.”

Insor’s 66-page document boils down to three key points. First, it proposes reforming the decision-making process at the CSTO. At the moment, decisions are made by consensus. Insor suggests that decisions should be made by a simple majority. As the Institute’s head, Igor Jurgens, told the newspaper Kommersant: “The CSTO will be worthless if it remains just a club where people go to babble. In Russia, we understand this and our partners are beginning to understand this as well. That is why we need a new decision-making system.” Second, Insor proposes radically transforming the CSTO’s relationship with Nato. Initially, the organisation was set up as a counterweight to Nato. But now the CSTO should be seeking actively to rebuild relations with the West. “An important task is to provide at least partial interoperability between CSTO and Nato Rapid Reaction Forces,” the report says. Finally, the CSTO should endeavour to become the main peace force in Central Asia and its neighbouring regions. The Insor report notes that the CSTO “should have systems in place to monitor potential conflicts that might threaten the security of its member states”. This includes “taking into account the colour revolutions (civil resistance) in former Soviet states, the events in northern Africa and the Middle East, and the likely rise of extremism when coalition troops withdraw from Afghanistan”. Experts note that it is the events in the Middle East that have hastened talks on reforming the CSTO – and the leaders of the union are not, in this case, detached observers. Half of the organisation’s heads of state have been in power for a long time – which gives them something in common with the former Tunisian president Ben Ali, deposed Egyptian dictator Hosni Mubarak, who is now awaiting trial, and the former Libya leader Col Gaddafi, who is believed to be seeking refuge from Nato bombs in a bunker. Nursultan Nazarbayev, the Kazakh president, has been in power for 20 years; Emomalii Rahmon has ruled Tajikistan for 19 years, and Alexander Lukashenko has headed Belarus for 17 years. The parallels are obvious enough to make the leaders of the former Soviet republics think hard, a source in diplomatic circles told Kommersant . “In the past, some members perceived the CSTO almost as a burden, then the events in Africa sobered them up”, the paper reported. It is possible that Moscow might also have an interest in this case, says the Moskovskiy Komsomolets columnist Mikhail Rostovsky. In his opinion, reform of the CSTO would strengthen Moscow’s influence in Uzbekistan, Tajikistan and other Central Asian republics. The leaders of these countries have always been interested in maintaining and strengthening their power, and, if Moscow gives them the tools to do this, local leaders will be tied to Russia even more tightly, Mr Rostovsky believes. However, the editor-in-chief of Russia in Global Affairs , Fyodor Lukyanov, is not convinced that this will be the case. “If the Collective Rapid Reaction Forces of the CSTO are able to intervene in internal conflicts, the CSTO will be just like the Co-operation Council for the Arab States of the Gulf led by Saudi Arabia, which acted as the main fire extinguisher of the revolutionary movement. But it is a double-edged sword and many Central Asian countries, as well as Belarus, are unlikely to want to give Russia an opportunity to interfere in their internal affairs.” At the moment, the CSTO is commenting only cautiously about the forthcoming reforms. According to the organisation’s secretary general, Nikolai Bordyuzha: “Nobody is talking about a profound reform to the CSTO”. He says that the documents just need to be adjusted slightly by changing “one or two sentences”.