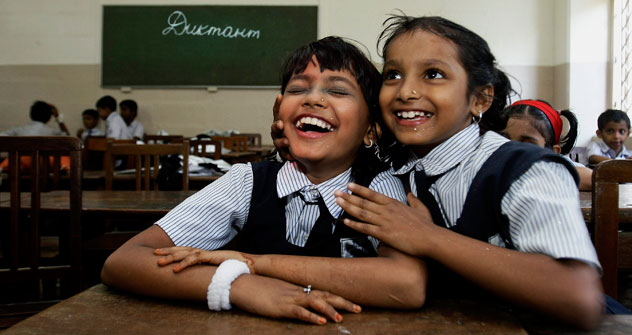 The Russian language teaching in India, which saw its heyday in the 1970s and 80s, has not received the kind of support it deserves. It’s time to address the dearth of experts in Russian, says Prof. Vinay Totawar

Russian trader Afanasy Nikitin (1466-1472)’s journey to India is widely seen to be the beginning of the India-Russia ties that are blossoming today. However, the discussions at the March 2006 conference at St Petersburg on “Russia and India: St. Petersburg as a case of mutual influences through cultural interaction”, traces the origin of ties to V-IV century BCE.

Russia has always had a special fondness for India. For example, Nikolai Konstantinovich Rerikh was absolutely passionate about Indian culture and loved India so much that he made India his home. On the basis of the archeological evidence collected by Viktor Viktorovich Golubev in 1911 during his scientific expedition to India, Rerikh N.K. arrives at the conclusion that “Now all the intuitions and guesses appear to be acquiring a basis. Customs, burial mounds surrounded by fencing, daily use implements, structures, details of the headgear and clothing, all the wall paintings, and finally the origins of language – all these are so close to our beginnings. In everything one feels the oneness of initial developmental path.” The works of two generations of the Rerikhs (Nicholas and Svetoslav Roerichs) and the translations of Indian epics undertaken by two generations of Barannikovs (Aleksei Petrovich and Pyotr Alekseevich Barannikovs) bear eloquent testimony to Russia’s keen interest in India.

Despite such ancient cultural contacts, the history of learning and teaching of Russian in India is fairly recent. The Delhi University took the lead in starting the teaching of the Russian language in India in 1946. It was followed soon after by other departments of Russian in India: Allahabad University (1947), Osmania University (1958), and University of Poona (1964). These were part-time courses for beginners, aimed at acquainting the learner with the country, and providing access to the scientific literature available in Russian. Nevertheless, they played their role in providing India with its first Russists (specialists of Russian Language). On February 12, 1960, with the signing of an agreement on “cultural, scientific and technical cooperation”, the cultural exchange between India and Russia started in earnest. Under the cultural exchange programme, in 1961-62, the first Indian students and scholars went to Russia for studies and Russian scholars and experts and teachers of Russian started visiting India. But the courses in Russian still remained part-time and optional.

In November 1965, the Institute of Russian studies started a “One-Year Intensive Course in Russian” that consisted of 850-900 hours of classroom interaction. On completion of the one-year intensive course, the students were admitted to the B.A. (Hons.) in Russian, a three-year course. The first graduates passed out in 1969. The same year, the Institute of Russian Studies merged with the JNU which started the five-year M.A. programme in 1971 and these first graduates were admitted to the 4th year of the M.A. programme. Thus, the first batch of students with a master’s in Russian graduated in the year 1973. After much rethinking, the Centre of Russian Studies went on to modify their M.A. Russian programme and started a five-year integrated M.A. programme, where students, on completion of 11-12 years of schooling, obtained an M.A. degree, not in 6 years (as in case of the first batch), but in 5 years. The M.A. programme of JNU was considered to be the best in the country in terms of its design and course content.

Consequent on the 1960 agreement, there was an explosion of scientific and technical cooperation between India and Russia in the early 60s. Young India was setting up its heavy industries. The steel plants in Bhilai and Bokaro and the oil refineries in Barauni and Koyali bear testimony to this collaboration. The late 60s saw an upsurge in defence collaboration, which initially started with the purchase of equipment and culminated in the transfer of technology. To cope with the increasing demand for Russian language experts, many university departments in the country started M.A.-level programmes in Russian in the late 60s and early 70s. These included: the University of Poona, Banaras Hindu University, University of Kerala, M.S. University, Karnataka University, and Marathwada University. These M.A. programmes differed from JNU's M.A. programme as they offered an M.A. to those who had done a 2-3 year part-time course in Russian as an optional subject. The late 60s and early 70s mark the period when the first Indian philologists went to Russia for higher studies or pursue research programmes under the cultural exchange programme.

The 70s saw a market acceleration in Indo-Russian collaboration in diverse areas. From 1967 onwards, many bilateral pacts on cooperation in the field of science and technology were signed. The need for Russian language experts increased manifold. Not all students of Russian had access to the five-year M.A programme at JNU. Therefore, in 1975, the Department of Russian at the Central Institute of English and Foreign Languages (CIEFL), Hyderabad, decided to introduce the M.A. programme by correspondence – the first Russian department in the country to do so. This was a three-year programme that followed 2 to 3 years’ study of Russian as a part-time course. This correspondence-cum-attendance course consisted of four contact sessions of two months’ duration. Each contact session comprised 220-240 hours of classroom interaction. This was a very popular programme and it played a significant role in the preparation of Indian Russists.

The 70s and the 80s also witnessed a boom in the development of Russian language teaching in India. Research programmes like M.Phil and Ph.D. were started. The Central Institute of English and Foreign Languages (CIEFL) regularly conducted refresher courses for teachers of Russian. At one time, the University Grants Commission made it compulsory for teachers to attend two refresher courses in order to qualify for career advancement. Students and teachers from India visited Russia under the Cultural Exchange Programme for short- and long-term courses. Russian scientists and experts from different fields also visited India. By the 80s, about 30 universities in India were teaching Russian. By the late 80s, there were more than 400 students with an M.A., about 200 with a B.A., and about 30 Ph.Ds and M.Phils.

However, the real breakthrough came when the Integrated Long Term Programme in Technical Cooperation (ILTP) started in the 80s. This programme achieved many concrete results: 1. Setting up of an Advanced Research Centre for Powder Metallurgy and New Materials in Hyderabad 2. Setting up of Bharat Immunological and Biological Cooperation Ltd. (BIBCOL) at Bulandshahr, where scientists of the two countries developed the polio vaccine 3. Setting up of Indo-Russian Centre for Advanced Computing Research at Moscow 4. Setting up of BrahMos Aerospace Private Ltd. for the production of cruise missiles, with many other similar projects in the pipeline.

If the quality of Russian experts in the country is to improve, we should consider establishing an All-India Russian Language Testing Authority (AIRLTA), along the lines of The English and Foreign Languages University’s own AIELTA – The All-India English Language Testing Authority, TOEFL, and JLPT. It could then develop and offer a Russian as a Foreign Language Proficiency Test (RAFPT).

Scientists of both countries were now engaged in cooperative endeavours in the field of science technology and the RLT was flourishing.

And then suddenly in the 90s, RLT in India suffered a slump. The interest in Russian declined. There were several reasons: political as well as economic. Some of these were: the boom in the field of information technology, the disintegration of the Soviet Union, lack of support from the Russian side in providing teaching materials, non-functioning of the cultural exchange programme between the two countries, adoption of a free market economy by the Russian Federation, the sudden emergence of call centre jobs, availability of jobs in the IT sector after doing courses of very short duration. This lull in RLT continued for about two decades and the quality of RLT continued to decline. Few students chose to study Russian. As a result, when the study of Russian language is picking up in the country and there is a need for specialists, we do not have any. Many universities, MSU Baroda, Kolhapur, Pondicherry University, Madras University, etc., cannot fill the posts of Russian language teachers owing to the non-availability of specialists.

Unfortunately, Russian is generally the last choice for learners. As a result, most of those who choose to study Russian are those who fail to get admission elsewhere. Hence, the dropout rate is higher and the quality of the specialists leaves much to be desired. With the adoption of a free market economy, Russia has become as lucrative and competitive a market as any other in the world. Therefore, the syndrome of choosing Russian as a last resort will certainly have to change.

Owing to politico-economical upheavals in Russia, there has been lack of support for RLT in India from the Russian side, but times are changing. Russia is stabilizing and the Russian authorities have started supporting and encouraging RLT in India. The three festivals of Russian language in the last five years at Mumbai, Delhi and Thiruvananthapuram underscore the commitment to promote the Russian language. The “Russky Mir” Foundation is becoming active. Recently, in the first week of September this year, they organized a four-day Festival of Russian Language, Literature and Science at Thiruvananthpuram, where the Russky Mir Foundation, in collaboration with the Centre for Russian Language Teaching, conferred the Esenin Award on Prof. Vinaychandran for the translation of Sergey Esenin’s poems into Malayalam. The Foundation has also instituted some scholarships for the Indian students to go to Russia for studies in Russian. If such encouraging developments continue, the future of RLT in India looks bright.

It’s the right time, however, to address the dearth of experts in Russian in India.  Russian is as lucrative, competitive, important, necessary, and crucial as any other foreign language. Presently, there is a dearth of experts in Russian in the country. For example, not many realize that the call centre industry requires youngsters who know Russian; we do not have them right now. The market is growing: the 15 sovereign countries that emerged after the collapse of the Soviet Union continue to understand and transact business in Russian. There is a formidable mass of scientific and technological information available to us in Russian. But if we are to recognise the potential of Russian, we need to stop looking at Russia through English glasses!