The flexible e-textbook of the future 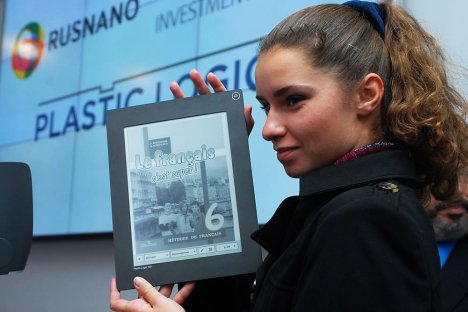 Children can draw images, type in characters, underline and erase anything from the screen. Source: press photo

Students’ schoolbags will be several kilograms lighter thanks to a new digital reading device weighing less than 500g that can store the equivalent of 40 books.

A new electronic reader for schoolchildren was unveiled at the Moscow Planetarium this month, which can store around 40 textbooks – about a year’s worth of reading.

The Plastic Logic 100 is   designed for learning – the device does not support games and cannot connect to the internet. W eighing less than 500g, the e-reader is easy to carry and like a typical textbook in size – less than 8mm thick and measuring 27cm diagonally.

The British company Plastic Logic, which produced the device in co-operation with Russian technology firm Rusnano, calls it “the textbook of the future”.  It uses the company’s  PlasticPaper technology, which allows the user to bend the device, like they would a book.

Anatoly Chubais, d irector of Rusnano, described the technology as a replacement for paper. Importantly, bearing in mind the target  market, the Plastic Logic 100 is shatterproof, as well as fingerprint resistant. The gadget has no screen glare and the text is visible even in bright sunlight, meaning it is as easy to read as a printed page.

Children can draw images, type in characters, underline and erase anything from the screen. They can also select and annotate snippets of text, make bookmarks and use the device’s search engine.

New books can be uploaded to the device using the micro USB port, but students will not be able to download or delete their own books, as internet access is not provided. The reader needs charging only about once a week. Under the soft-touch plastic exterior there is 4gb of storage, an 800MHz processor and Windows CE.

Russian children will be the first to get to try out the new product thanks to the significant investment made by Rusnano, which owns 25pc of Plastic Logic. Around 1,000 electronic textbooks have been sent to schools in six regions, free of charge.

Steven Glass, senior director for product marketing at Plastic Logic, said: “Nobody in the world has been able to create such a model and we are offering the Russian educational system the opportunity to test this device, which may then be used in other countries.”

Britain’s Minister of State for Trade and Investment, Lord Green of Hurstpierpoint, attended the launch and said he hoped that it would eventually play a similar role in the British education system . However, at a cost of around £250 per reader, it might be some time before this happens.

There are some limitations to the e-reader. A major drawback is that the screen is black and white, so it cannot display the colour images important in the study of biology, history or art. Another weak point is the relatively slow “paging” speed; the device’s electronic ink technology runs at a rate of three frames per second.

The response so far, however, has been more positive than negative. “The product is quite exceptional in carrying out the tasks for which it was designed,” said Eldar Murtazin, columnist for the website Mobile Review.

The technology looks set to be developed further in Russia. A factory for the manufacture of next-generation screens and devices is currently being built in Zelenograd on the outskirts of Moscow and, when complete, it will be the largest factory in the world for plastic electronics.