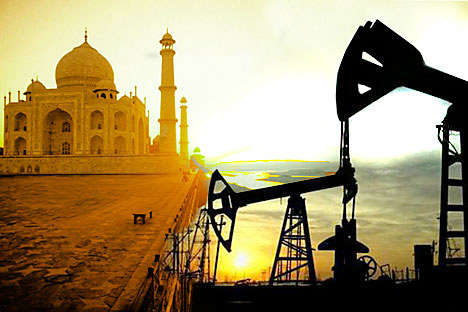 India’s age-old ties with Azerbaizan that hark back to Azeri craftsmen participating in building the Taj Mahal are becoming multi-faceted and acquiring a new energy.

The burgeoning relations between India and Azerbaizan, the oil-rich Central Asian republic, hark back to the 10th century BC when the famous Silk Route connected India with the Central Eurasian region. Over the next few centuries, trade and cultural affinity brought the two regions closer.

Azerbaijan’s strategic location on the Western side of the Caspian Sea ensured that it became the hub for merchants travelling from India towards Europe. Consequently, Baku, the capital of Azerbaijan, emerged as the largest trade centre on the long stretch of the Silk Route. The links were cemented when master craftsmen from Tabriz, principal city of Azerbaijan, got involved in the construction of the Taj Mahal, the fabled monument to love built by Emperor Shah Jahan in memory of his beloved wife.

The Ateshgah temple near Baku stands as an eloquent reminders of India’s close ties with the region spanning across the Caspian Sea. In the Middle ages, Hindu traders, mostly from Multan and Sindh, visited Azerbaijan via the Silk Road trade and worshipped at Atashgah temple. While they were there, they used to practice religious ceremonies which were conducted by Punjabi Pandits (monks). According to historical sources, the local people also worshipped at Atashgah temple because of the famous seven holes with burning flames. Thus, the name Surakhani which means holes with burning fires became famous.

Inside the temple a cubical brick structure is built around a fire which was first fuelled by natural gas seeping out of the ground. Flames leaped out of the four chimneys raised on top of this structure. Every evening, these fires cast a deep orange glow over the enclosure. An inscription in Sanskrit and Gurmukhi above the narrow arched entrance of this monument reaffirms Azerbaijan’s historical ties with India.

The Ateshgah monument, also called the ‘fire worshipper’s temple’, traces its origins to Zoroastrianism in ancient Azerbaijan. The temple complex’s outer rectangular parameters house a row of rooms. Between the late 17th and mid-19th century, Indian traders built this complex with several guest rooms, stables and prayer rooms. This temple has also been compared with the Sri Jwalaji temple of fire in India. Though Azerbaijan is a Muslim country, there are a few Azeris who have become followers of ‘Hare Krishna’ and are mostly represented by members of ISKCON.

The cultural bonds were replenished by folklore, poetry and literature. Nizami Ganjavi, the celebrated Azeri poet who lived in the 12th century, wrote ‘Laila–Majnu,’ a legendary love story that has become synonymous for lovers in India and provided inspiration to countless Hindi movies. While Laila-Majnu, Shireen-Farhad and other romantic folklores traced to Azerbaijan remain popular in India, Bollywood superstars are popular in Azerbaijan among the younger as well as older generations. Till date, Bollywood’s legendary actors Raj Kapoor and Nargis, are still favourites in Azerbaijan. In fact, many girls are named Nargis. One can also find many girls named Indira (after late Prime Minister Indira Gandhi).

The historic linkage can also be seen in Azerbaijani-origins of Babur, the founder of the Mughal dynasty in India. The architect of the outstanding monuments constructed during the Mughal period, including Humayun’s tomb in Delhi, was from Azerbaijan. Agha Mirek Ghiyas was the principal architect of Humayun’s Tomb in New Delhi and Rugn din Masud Masihi was a personal physician of Jahangir.

A part of the former Soviet Union, Azerbaijan declared its independence on October 18, 1991. India recognized Azerbaijan in December 1991 and established diplomatic relations on February 28, 1992.

India and Azerbaijan have expanded bilateral ties across a diverse spectrum, including trade and economy, energy and education. The two sides are looking now at opportunities for cooperating in the field of petro-chemical industry, especially in the petroleum refining sector. They are also seeking to enhance technical cooperation and find possibilities for exchange of views in the field of agriculture. Today, much of bilateral trade with Azerbaijan is carried out through the UAE, which does not get reflected in the trade statistics. Many Indian pharmaceutical companies are successfully competing with European companies in Azerbaijan. Bharat Heavy Electricals Limited (BHEL) has executed a project for Az-energy, a government undertaking, for the supply and installation of power generators for the Mingechevir Power Plant in Azerbaijan. India has supplied bauxite (aluminium ore) and aluminium concentrate to the aluminium plants in Azerbaijan, which have contributed largely to the quantum jump in India’s exports to Azerbaijan.

With its economy growing at a fast pace, India is looking to diversify its supply of energy and is keen to enter into a long-term contract with Azerbaijan for the supply of crude oil. During the third round of the India-Azerbaijan Foreign Office Consultations held in Azerbaijan's capital Baku on Sept 22-24 recently, the two sides focused on strengthening cooperation in the political, trade, economic, and cultural fields and people to people exchanges.

As India and Azerbaizan commemorate the 20th anniversary of the establishment of bilateral relations in 2012, the two sides are keen to restore not only the direct communications of the old by land and water, but also to establish air connectivity and reliable banking, shipping and digital links.

The political and economic relationship between the two countries is, therefore, becoming multi-faceted. In the past five years many agreements and protocols have been signed. Exchanges of official delegations and business delegations are taking place on a regular basis. There are endless opportunities for both nations to explore and expand the friendship.

Dr. Nivedita Das Kundu is a foreign policy analyst and is presently working with the Indian Council for Social Science Research.