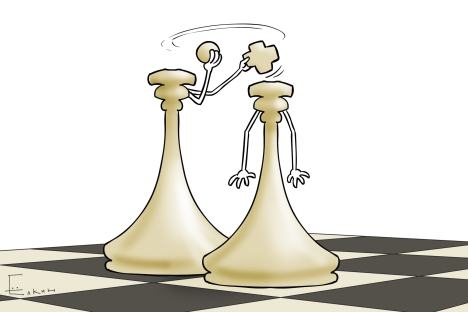 In an interview with Russia's major television stations, President Medvedev tried to reassure society that Russia's political system is working well, and that the opinions of the people do matter.

The plan for Vladimir Putin and Dmitry Medvedev to swap positions, announced at the United Russia congress Sept. 24., unleashed a lot of tension that had been building up in society at large. So when President Medvedev sat down with the heads of Russia’s three major television channels Sept. 29, his job was to soothe these passions.

In it, the president confirmed his commitment to universal democratic values and also made clear that the deal he made with Putin should not be seen as humiliating to the people who supported him and voted him into office in 2008. Medvedev clarified that the two men had agreed to swap positions, but that the situation could change if the mood of the public changed. In the interview, the president tried to make the whole operation more democratic than it has appeared.

“The decisions of the United Russia congress, these are just recommendations,” Medvedev said. “Recommendations of a political party to support two people in elections – nothing more. The choice is up to the people. Any political leader can lose an election.”

During his interview, Medvedev remained true to his usual principle of avoiding the extremes, trying to draw a middle line between the right and left of the political spectrum.

The president seemed to have two items on his agenda: The first was to make clear that no disagreements between himself and Mr. Putin will endanger Russia’s statehood, and the second was to reengage the people in the political process.

The need to reiterate the stability of the Russian political system was very important for Medvedev, since for several years the liberal opposition and certain foreign observers have hoped that a split between Putin and Medvedev would be as devastating as the factionalization of Mikhail Gorbachev’s Politburo. This didn’t happen.

In his interview, Medvedev said that the practice of two political leaders working together for the good of a single political organization was not unique to Russia, drawing parallels with Hillary Clinton and Barack Obama. Although there are some differences in the situation, in essence, Medvedev is right. These American politicians are in agreement on such questions as who will hold the power and who will control the money. In this case, Russia is not very different.

The second goal of the interview was to mobilize the electorate. This is a much more difficult goal to achieve than the first one, as Russia is far from a fully functional multi-party democracy, and Medvedev’s assertions that “nothing has yet been decided” can only go so far towards convincing voters that their opinions matter.

In civilized countries, democracy is perceived as limiting unpredictability – the party that loses elections is always sure that it will not face repercussions upon ceding power, and the status quo for the people in terms of property rights and the availability of goods and service will remain more or less the same.  Russia’s political system remains unstable because of the upheavals in the 1980’s and 1990’s when these things were not true.

In Russia, political stability is vital for the economic activity of society, and the Russian political elite is trying to achieve this by maintaining a close grip on political power.

In general, the president’s interview showed him to be a realist. He is not a new Mahatma Gandhi or Martin Luther King, Jr. He is an average, modern politician, trying to pursue an agenda within his abilities and the situation presented to him by history. In that sense, Medvedev has done his job.

When Medvedev came to power in 2008, he stopped the nationalistic upsurge that was present in Russia at the time. In 2009, he launched a program of competition inside the political system. He never managed to see it through, but he tried, and I think history will appreciate that.

As we know Medvedev’s time as president is entering its final months, it is possible to draw some conclusions about his time in office. Medvedev did what he could, and it is unfair to criticize him for something he was incapable of doing.

Dmitry Babich is a political commentator for RIA Novosti.