Passive voice can also be a worldview 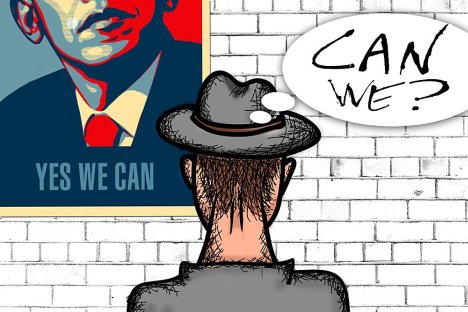 Russians and Americans are far apart on so many issues, and many choose to see them as opposites. Certainly, Russians add to the picture their own peculiar pessimism, while Americans with their irrepressible optimism take a more rose-tinted view. Yet both countries stretch across vast territories - a crucial factor in their development. Both have emerged rather isolated in contrast to tightly interconnected Europe with its compact co-existence that influences all its politics and culture, and even mentality.

On the way to the seacoast, a European may cross three countries in a few hours, which fosters a new interpretation of sovereignty and mutual liability. Unlike Europeans, Russians and Americans had in the past little opportunity to comprehend a worldview outside of their own, and so have nurtured a more self-focused, insular view of life, and, by extension, a more distorted perception of others.

For centuries, Russia faced much more formidable and incessant external threats, while Americans were sheltered between two oceans. The remoteness of the United States from the center-of-the-world clashes gave the nation opportunity to emerge and join the world stage fully equipped to gain from others’ losses, while Russians had to deter potential aggressors throughout their history.

However, our differences often hamper us in our efforts to understand each other. Here are three striking illustrations of our differences - sources of distrust and misunderstanding when Americans think and talk about Russia:

First, state-owned media is taken for granted in Russia. Russia’s extensive network of state-owned TV and newspapers is inconceivable to Americans. To them, it sounds like an oxymoron (either government or media). Most Americans jump to the conclusion that the Russian government suppresses ‘its’ media and what is reported cannot be considered true or independent. The conventional wisdom is that Russian media, out of subordination or fear, would never put out a story that undermines the government. But a daily reader of the Russian press knows that just isn’t true. Still, Americans are astonished to discover truly professional and critical Russian media coverage, particularly regarding the government.

In reality there is a problem and it runs deeper than state-owned media; it concerns the whole society. Russians either are too jaded to make a stand or have no real means to do so. Courts, NGOs and community groups are weak and, less well understood in the United States, distrusted by the public. People do not even trust one another, and this, in turn, prevents social networking from taking root. As a result, people avert their eyes from the problems and put up with life around them as it is, which leads to the next phenomenon that is inexplicable for most Americans.

The second difference is the fact that in Russia, the Kremlin appoints governors. “Appointed by whom?” Americans ask in surprise on discovering that regional leaders in Russia are not elected. “Appointed by the president.” – “So, does the president decide who will govern a region?” – “Officially, a party that wins the elections in a region recommends a list of nominees to the president, who then chooses one and sends this decision to the state legislature for its approval.” Since 2004, when then-President Putin abolished the gubernatorial elections, legislatures have rubberstamped their approval.

The Russian public is ambivalent about this. According to the latest survey conducted on this subject a year and a half ago, only 54 percent of Russians favor the idea of a return to direct voting in regional elections, down from 81 percent a year after the elections were cancelled. The “voters,” hence, are more accustomed to this disenfranchisement, which is completely beyond the American scope. In fact, it’s sad for Russia. Over the long run, a country of indifferent onlookers has a troubled future. “Yes we can” would never have arisen in Russia.

The third illustration of our differences is closely related to the two preceding examples, and even this very sentence reflects a national way of thinking: Namely, in Russia, passive voice is widely used. The elections were conducted; governors are appointed; the candidate for the next presidency will be chosen and announced. “By whom?” – Americans are puzzled again, and the reality is that it’s almost impossible to convey the essence of this decision-making process to those whose social practices are so different from the outset.

A popular language Web site that explains the difference between passive and active voice notes that passive is used widely in two cases: first for scientific objectivity, and secondly, for politics. “Politicians often use passive voice to intentionally obscure the idea of who is taking the action,” explained Mignon Fogarty, author of a grammar Web site. Decisions were made, a nominee is about to be chosen, the plan is approved. Ideas and attitudes should be presented in active voice; that’s the American vision. Otherwise, nobody notices them. And eventually your concerns will be disregarded.