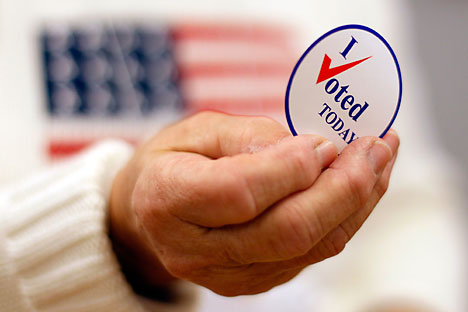 Both the United States and Russia are gearing up for a presidential election in 2012, and nothing brings out the contrast between my native country and my sometimes-if-they-give-me-a-180-day-visa adopted country like the differences between our political processes.

While I love getting caught up in the hoop-la and intricate minute-by-minute politico.com approach of the American model, there is much to admire in the clutter-free minimalist approach of the 35-minute Russian electoral cycle, where they waste no time on extraneous stuff like:

1. Candidate-branded bumper stickers, lawn signs and baseball hats: Branded items are for winners only, and since the electoral cycle is so very short, and, of course, no one in Russia actually has a lawn (that the public can see anyway), what’s the point?

2. Philadelphia Cheesesteaks: Ever since Boris Yeltsin’s ill-advised boozy boogie on the tarmac became the primary post-perestroika image, Russia’s leaders have avoided anything overtly physically sloppy or messy. Food consumed on national television is limited to the traditional bread dipped in salt, which is much easier on the tie and shirt collection.

3. A hit television series: Lasting through two presidential terms, a blockbuster series that details the inner workings of a fictitious presidential administration, in which the actor playing the president enjoys an actual approval rating significantly higher than that of the real sitting president can be terribly confusing. Puh-leeze. There is enough controversy over who is really running the country without putting Martin Sheen into the mix.

4. C-SPAN: “God is too high, and the tsar too far away,” runs an old peasant saying, and that’s the way the current Kremlin crowd intends to keep it. No need for raw uncut sausage factory detail - the sitting Russian government is hard at work, a message reinforced each night on the news. The scene: ornate inner Kremlin office. Minister X perches uncomfortably across from either the prime minister or the president. He mumbles his set piece, which includes at least one set of statistics, peeking out from under his bushy eyebrows nervously at the boss, who leans back in the slightly condescending manner of a headmaster, finally nodding and saying “Yes, that’s right.” Flashbulbs pop.

5. Sexual scandals: Russians are genuinely baffled by the prevalence of sexual scandals like the Monica Lewinsky “episode” toppling the political careers of powerful men. What is wrong with us? HRH (my “handsome Russian husband”) could not make head nor tail of the Senator Larry Craig foot-tapping scandal, no matter how many times Velvet, our daughter, and I explained it to him. The data went in, but his brain refused to fuse it together. He couldn’t link “gay” with “senator,” or “senator” and “at” with “public airport bathroom.” “Public airport bathroom” and “gay overtures” didn’t make sense as a pair, and he kept going back to “senator” and “public airport” as a dubious match, and was finally defeated by “gay senator” and “reinstatement.” Total data scramble. Tech support please.

Jennifer Eremeeva is a longtime resident of Moscow. She blogs at www.rbth.ru/blogs and www.dividingmytime.typepad.com. She is currently working on her first book.