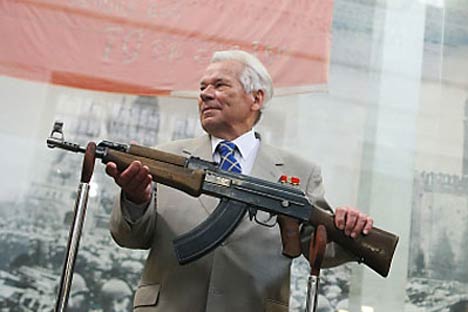 Rumors are swirling that Russia will cease producing the ubiquitous rifle, but nothing better has yet come along.

Reports that the Russian Ministry of Defense has discontinued purchases of the legendary AK-74 assault rifle made headline news in the Russian media.

In fact, the Russian military stopped buying Kalashnikovs about 15 years ago, because there were too many of them. Both the army’s stockpiles and factory warehouses are overflowing with all versions of the rifles, as are the country’s armories. According to Russian experts, the stockpiles would supply several armies the size of Russia’s in addition to all the world’s armies combined. General Nikolai Makarov, the chief of the General Staff of Russia’s Armed Forces, indirectly corroborated those estimates several days ago.

“The country’s mobilization stockpiles, including those of this assault rifle, are tens of times bigger than we need,” said the general before adding: “We are no longer happy with the assault rifles we have now.” Makarov’s admission that the Kalashnikov no longer meets the needs of the Russian military is perhaps the claim that caused the biggest sensation.

The AK-74, in all its variants, has long since become a national Russian brand along the lines of vodka, Yury Gagarin and the Kremlin. The Kalashnikov is, indeed, a unique assault rifle, the most reliable in the world. It can endure any weather conditions in any environment, be it dust, swamp, or sand; its barrel can be cleaned simply buy washing it under flowing water; even illiterate people can learn how to fire, disassemble and assemble, or fix it on the spot. It is no coincidence that the “Kalash” is particularly popular in Africa, Asia, and Latin America, especially among insurgent or guerilla groups. It’s very easy to grab, attach a loaded magazine and start firing.

That said, the AK is not without its flaws – first among them, its low accuracy rate compared to rival models. While the first couple of bullets do hit the target, the rest tend to veer away. This is a very efficient weapon for a short urban skirmish or a massive infantry assault supported by armor and artillery. For one-on-one battles however, or for other types of battle where accurate shooting against enemy machine-gun or grenade-launcher installations is required, the Nikonov AN-94 Abakan, or the AEK-971 would be better choices. The 9 mm silenced AS, intended for destroying an enemy protected by shrapnel-proof vests or 5 mm steel plates, as well as non-armored vehicles, could also prove useful. Russia has many weapons superior to the Kalashnikov in terms of combat specifications.

Even so, an army officer with more than one war behind him and with a thorough knowledge of weapons claims that the new models are only 10 percent better than the old ones.

Mikhail Kalashnikov himself is well aware of this. When asked to comment on reports that assault rifles superior to his AK have emerged, he said: “I know, but let them gain the authority of my rifle first, and we’ll talk then.”

Indeed, the Kalashnikov’s authority is second to none.

Over the 60 years of the Kalashnikov’s existence, a whole family of assault rifles has been developed using it as a model. They are all standardized and identical in terms of operating principles and feature a single automatic design, which greatly facilitates training and repairs. Spare parts are interchangeable between different versions, eliminating logistics problems.

In addition to the assault rifle, Kalashnikov systems can include add-ons such as barrel-mounted grenade launchers, night- and daytime sights, special-purpose ammunition, magazines, bayonets, and other devices. But, most importantly, all these weapon systems follow the main Kalashnikov principles: simplicity, dependability, and reliability.

That Russia is able to manufacture millions of these weapons and ammunition for them in almost automatic mode is an important consideration. Shutting down such a juggernaut to achieve a 10 percent efficiency gain is something no military leader in his right mind would do.

The Abakan, the AEK-971, and the AS are also supplied to the Army and the Navy, albeit in very small quantities intended mainly for special forces and intelligence units. Serial production to meet the needs of the entire Russian armed forces will only be possible when there is no longer conscription in Russia. Professional soldiers will treat their personal weapons with a lot more care and respect than current conscripts do.

Meanwhile, the Kalashnikovs remain in demand on the international weapons markets. Dozens of countries, including the United States, purchase them. Several years ago, Russia sold 100,000 Kalashnikovs to Venezuela and promised to build a factory near Caracas to produce the rifle and ammunition.

Press reports immediately linked the weapons to Colombian guerrillas. The fact is, those guerrillas have at their disposal lots of similar rifles made in China, Egypt, Bulgaria, Poland and elsewhere. The AK is manufactured around the world. Yet the most discerning armies still buy the rifle from Russia, thanks to its higher reliability and the fact that it does not overheat after a few shots, which Chinese versions tend to do.

Any weapons store in Southeast Asia, Africa, or Latin America would carry a large selection of Kalashnikovs. Trust the experts: Any rifle costing upwards of $200 is Russian-made. Anything cheaper than that is counterfeit.