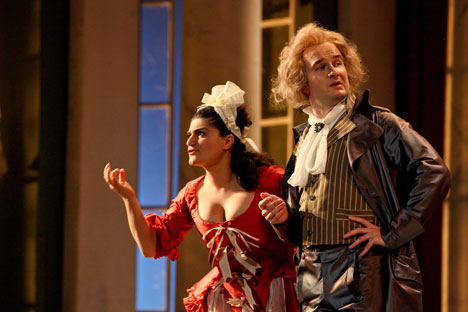 In a production of Mozart’s opera "Cosi Fan Tutte" in the Ural city, European opera stars clad in Baroque period costumes sing about feelings that are still relevant today.

Ever since Perm's cultural revolution began, world-class premieres have no longer been a rarity in that Ural city. One example was the recent opening of Mozart's "Cosi Fan Tutte" at the Perm Opera and Ballet Theater, under the direction of Theodoros Kourentzis.

In the six years that Kourentzis has been musical director and chief conductor at the Novosibirsk Opera and Ballet Theater, he has built up a body of fans who are ready to follow him anywhere. As a result, tickets for the performances sold out long before the opening night.

“I wanted to distance myself from the contemporary directorial mainstream and make an authentic production preserving period sound, costumes and setting," said Kourentzis.

In his attempt to carry out Kourentzis's plan, set designer Stephan Dietrich turned the whole stage into a spacious hall with high ceilings and luxurious chandeliers, as were present in the houses of the elite of Naples during Mozart's. “We evoke the Baroque epoch but without its excesses in everything, sets, costumes and most importantly, acting. We have preserved the style but given up excessive theatricality,” Deitrich said.

The opera lasts three hours, with running subtitles in Russian helping the audience through the merry adventures of two couples who have swapped partners. Yet feelings do not need translation. The question at hand is: Who really loves whom?

“The opera is subtitled ‘School for Lovers.’ I think that pinpoints the message of the opera better. I would even call it ‘A Lesson for Lovers’, because every twist of the plot tells us that love cannot follow any rules and every impulse brings new experience," saidthe Mattias Remus, who traveled to Perm from Germany to direct the production.

“To me, the plot of 'Cosi Fan Tutte' poses a serious moral problem: You see, a girl has no chance to resist moral blackmail by young men who say, 'If you don’t surrender, I’ll die.' This is mean and I am glad that, in our play, the men are taught a lesson, which is that a woman has the right to love whom she wants,” said Maria Forsstrom of Sweden, who sings the part of Dorabella. Her light-hearted heroine is the first to succumb to the blandishments of her seducer, who doubles as the fiancé of her sister Fiordiligi.

Fiordiligi is sung by Simone Kermes of Germany, the star of the production who is known for her outstanding musical temperament. Judging from her stage acting, she also has an undoubted gift for comedy: the funny faces she makes throughout the opera would do credit to any mime artist and, of course, her singing is divine. Kermes has recently been awarded the prestigious German ECHO Klassik prize as Singer of the Year, which is the equivalent of an Oscar in the world of opera.

Kourentzis and Kermes are old friends: He arranged the singer’s debut in Russia in 2006, when she performed the part of Donna Anna in concert version of Mozart’s "Don Giovanni" at the Tchaikovsky Concert Hall in Moscow. Spectators and critics were overwhelmed by her “etched fury and intricate angelic tenderness”.

“Although we have been friends for many years, I have never seen Simone in stage productions, only in concerts. So it is a kind of first for me today and I think Simone’s talent does not require any comment,” Kourentzis said. And, of course, he is proud of his orchestra, MusicAeterna: “They play with such emotion and bring out every sound in such detail; I haven’t enjoyed my other productions of this opera quite as much.”

MusicAeterna performs "Cosi Fan Tutte" on period instruments, including the hammerklavier (a cross between a harpsichord and a modern grand piano), baroque string instruments and classic woodwind.

“Modern woodwind instruments are, of course, more stable but they do not produce the same colour and do not blend so ideally with the strings. They lack the 18th-century aroma required for the opera to work in the proper context,” Kourentzis said. In his opinion, the main message of the production is that humanity’s problems are the same in any day and age. And this idea sinks in, as we look at the 18th-century characters and become aware of the continuity of time.