On the right track: a train to New York, via Siberia 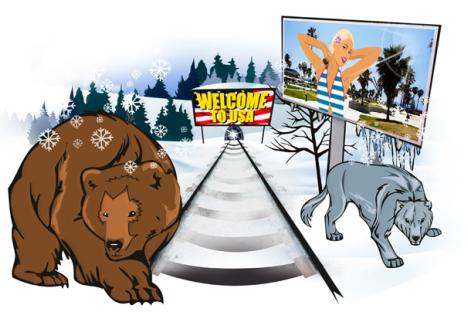 "What Yakutia lacks in population, it makes up for in the mineral wealth beneath its near-frozen surface".

Russia’s size is a blessing and a curse. Geographically, Russia is by far the world’s biggest country. It sits awkwardly across Europe and Asia (roughly 70pc of the population in Europe, 70pc of territory in Asia). I long ago subscribed to the view that we should say there’s Europe, Asia and Russia. Let’s face it, the country is big enough to be thought of as a continent.

But for now, Russia remains a country. An enormous and very diverse country. Over the years I’ve been present at a number of presentations from Russia’s regions. Too often, they’ve gone along the lines of: “We come from the wonderful region of X. We have beautiful nature. Come, see; and invest.”

Er, sorry guys, but business needs something a bit more concrete to go on than that. Invest in what? Are there serious projects? And what are the guarantees?

In August I visited Yakutia, the biggest “subject” of the Russian Federation. The territory compares with India in size. Yet the population, at fewer than one million, is just under one-thousandth of the population of India.

But what Yakutia lacks in population, it makes up for in the mineral wealth beneath its near-frozen surface. (Yakutsk, the capital, is one of the largest cities in the world to be built on permafrost. The first couple of metres beneath the surface are frozen solid).

Because of the permafrost, even drilling foundations for buildings is a challenge, let alone drilling for minerals. But when you are sitting on one of the world’s largest deposits of diamonds (among other valuables) it suddenly seems worth it.

The delegation from Yakutia is coming with some concrete proposals for co-operation (go to www.rbcc.com and click on the Yakutia reference in the “Events”>“London Events” section for more details).

On the far eastern tip of Russia, a fantastic project, which might grab the world’s attention, is a plan to build a tunnel under the Bering Straits which separate Russia’s easternmost tip from Alaska. The Trans-Siberian Railway is already being extended north to service Yakutia and other remote regions of Eastern Siberia and the far north east of Russia. There aren’t so many roads in that part of the world, so the potential for  expansion is great.

If the railway is taken to the suggested limit, it will enter the tunnel a few miles south of the Bering Straits, and the tunnel will emerge in Alaska. The main aim of the tunnel is to carry freight. Instead of goods being sent across the Pacific Ocean by ship from the Far East, including China, it would be more economical to put them on the train. It’s estimated that 3pc of the world’s freight traffic could travel on this route.

Of course, for those who still see a certain romanticism in rail travel, it opens up the possibility of the journey of a lifetime: board a train in London and you could go all the way to New York, via Siberia. Absurd? That’s no doubt what they said when the first explorers set out to show that the world wasn’t flat, or to put a man on the Moon.

Stephen Dalziel is executive director of the Russo-British Chamber of Commerce.