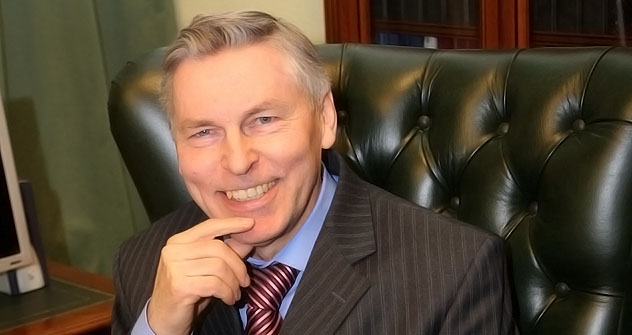 People’s Friendship University of Russia (PFUR), one of Russia’s top institutions of higher education, blends high standards of excellence with a high quality of life. Hosting students from around 150 countries, it’s the ultimate address for those who want to succeed in the global village.

Vladimir Filippov, the rector of PFUR, upbeat about attracting India’s budding IT talents, bets on the best.

What competitive advantages do Russian universities have?

A state standard of education has existed in Russia since the Soviet times. We did research comparing the subjects taught at 19 universities in the US. Only two subjects were the same: English and History. All the other subjects differed. In Russia that could not be. Russian education guarantees fairly high quality. Different Russian universities have their own strong areas.

What are the advantages of PFUR?

PFUR is the only university in the world with students from 140 countries. Students want to come here to study because we provide not only a guaranteed quality of education, but also a high quality of life. We have a wonderful polyclinic, our own department of police, dozens of cafeterias and restaurants. Secondly, people must think about their careers. Upon graduating, our students have friends in 50 countries around the world, if not more. These friendships prove useful outside the university as well. In time, all these people become truly prominent figures — ministers, and prime ministers, and so on. The PFUR connection will be very useful, specially if a PFUR graduate wants to open his own business.

Here are some specific examples: a graduate of PFUR is now a minister in Canada where she heads a committee for indigenous peoples of the North. In Chad, the prime minister from 2008 to 2010 was PFUR graduate Youssouf Saleh Abbas, a lawyer. In Latin America, Bharrat Jagdeo is now completing his second term as President of the Co-operative Republic of Guyana: he graduated in 1990 from PFUR with a degree in Economics.

Does PFUR have many students from India?

Right now we have fewer Indian students than in the past. But even so PFUR has a substantial Indian chapter, around 60 students. Of course, it is far smaller than our Chinese chapter, some 600 students.

What has changed in the last 20 years? Why are there fewer students from India?

Is knowledge of Russian required to study at PFUR?

We have developed a unique system thanks to which a student can master Russian in a very short period of time. Our system is the envy even of the center to prepare cosmonauts. Since 1976 all foreign cosmonauts have learned Russian from RUDN professors. But some students do not want to spend an extra year learning Russian, and want to study in English. In that case we give them a three-month accelerated course in Russian. So that they can go to the store or, say, meet a Russian girl. This practice is already in effect in our Faculty of Medicine.

But in time our students realize that unlike graduates of other universities, they will know not only English, like everyone, but also Russian. This for them is a plus. For learning the culture, for business, and in many other spheres. If you don’t know Russian and the Russian mentality, it is hard to work with Russians. Roughly speaking, until you’ve drunk a glass of vodka with them, your venture will stall, no matter how much money you pour into it.  “People decide everything,” as they say. In India, for example, many engineers know English. But only a fraction of those know Russian. So on the job market, Russian is a plus.

How do foreign students apply to RUDN?

For foreign students the application process has been made much simpler. On the RUDN site, applicants will find a list of the necessary documents that must be sent to us in the regular mail. We review those documents and if the applicant’s grades are on average not less than 60% of the maximum score, he or she is automatically accepted to RUDN. We meet our students at the airport ourselves, around the clock. We have our own fleet of cars for this purpose. There is also a special medical center dedicated to helping foreign students adapt — to help them get used to the Russian climate more quickly, and to our food. We explain the rules and laws of Russia to them in their native language. After that, when they’ve settled in, they begin their studies.

How many foreign languages do you know?

Two. English and French. I have two degrees in Translation. Incidentally, languages are one of the advantages of RUDN. For example, our Francophone students, who of course know French, are required to study English and may study Russian as well. We also teach all our foreign students the language of their chosen profession. For example, Volkswagon has an office not far from RUDN. That company does not need linguists. It needs people who understand motors and small automobile parts. Dutch flower concerns that export flowers to Russia need people with degrees in Agriculture. Here’s another interesting fact: the current Prime Minister of Kazakhstan, RUDN graduate Karim Massimov, knows Kazakh, Russian, English, Arabic and Chinese. He speaks them all fluently.

What professions do your Indian students favor?

Naturally, our students tend to choose those professions that are needed in their home countries. For example, RUDN has an agreement with Angola. We educate their future engineers in the mining industry. We have a similar agreement with Kenya. We educate their future tour operators. We also have agreements with a number of countries in Latin America. We educate their future specialists in the oil and gas industry. Most students from India apply to our Faculty of Medicine. Some apply to our Faculty of Engineering, while others prefer Computer Science. We hope to have more students in our IT faculty in future. This sphere is very highly developed in India, while Russia gives you the best education in mathematics. Russian students are still the main winners at international Olympiads in IT. It’s hard to compete with out students. We have a fundamental system; children begin studying math in first grade. While still in primary school, they receive a base that helps them succeed in the fast-developing area of IT technologies.

Where do your foreign students live? Do they have everything they need?

Naturally, they all live in dormitories. Some try to rent apartments. But they almost all return to campus where life is more comfortable and the security is much better. Our students also all receive stipends. True, they aren’t large; they are equal to the stipends of our Russian students. The older students usually earn money on the side. We try to find our students jobs around the university. And we help them to find summer jobs elsewhere.