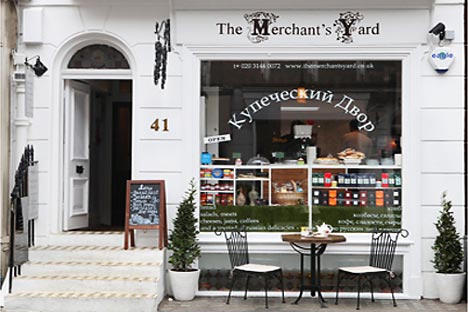 Two new Russian restaurants are opening in London this year. Mari Vanna (116 Knightsbridge), which already has branches in Moscow, Petersburg and New York, is set to start serving in Knightsbridge this autumn. It promises to “transport each guest into an archetypal Russian home adorned with trinkets and tchotchke… bookshelves filled with Russian literature with elaborate chandeliers hung far and wide”. Chandeliers seem to be a de rigueur feature of up-market restaurants; as one London-based Russian friend recently remarked “for Russians, there is no such thing as too posh”.

The other new arrival is not – strictly speaking – a Russian restaurant. Arkady Novikov’s new restaurant in Mayfair will serve Asian seafood and Mediterranean cuisine, but Novikov (who runs several successful chains) is such a household name in Moscow that his expansion abroad is an interesting development. He has said: “We are excited about bringing the Novikov experience to the UK and are confident we can bring a new dimension to the London restaurant scene.”

Opened in December 2010, the slightly faceless Sobranie (8 Fountain Square), (whose name means ‘meeting’ or even ‘conference’) is still making its mark. The delightful owners, Azerbaijan-born Sabir Suleyman and his Georgian wife, Medea, are veterans of London’s restaurant scene. Their decision to open a Russian restaurant, round the back of Victoria station, is a sign of the times. “We are hidden away here,” says Suleyman, “but people are finding us and they are coming back. Around 60% of customers are English, but a lot of them speak Russian or have been to Russia. They miss the culture and traditions and they bring their friends here to share the experience.”

Sobranie’s weekday business lunch (£12.95 for three courses) covers several Russian staples, from a tasty beetroot salad and borscht with sour cream through meat-stuffed pelmeni dumplings to blini (pancakes) with honey.  “We are adding mushroom pelmeni and lenten (meat-free) borscht” adds Medea, “for the vegetarians. A lot of office workers round here come for lunch.” The owners have a real commitment to providing Russian food “like my grandmother used to cook” and are proud of their fryer- and microwave-free kitchen. The décor includes a gallery of paintings by one of the kitchen hands, alongside the statutory nesting dolls and samovars. “We want to show people Russia is not only vodka, potatoes and bears on a string” says Suleyman.

Abracadabra on Jermyn Street is as colourful as its owner, a millionaire entrepreneur and ex-east end barrow boy, who bought his current title ‘Lord Dave West of the Manor of Hollesley’ after it was advertised on ebay. With a nightclub downstairs, cctv in the bathroom and booths for privacy, Abrcadabra is definitely aiming for the sleazier end of the culinary continuum. The extensive menu, in English and Russian, offers such staples as mushroom julienne (£5.50), caviar, ‘herring in fur coat’ (the coat consisting of beetroot, other veg and mayonnaise) and shashlyk (skewered kebabs, £13.90). The restaurant sells West’s own ‘Dog’s Bollocks’ wines, but prices go all the way into the thousands for champagne and fancy vintages. Even a bottle of vodka will set you back a hundred quid.

Mark (“I don’t do surnames”), one of Abracadabra’s loyal staff, has discovered a mid-life interest in all things Russian. “It’s a fascinating culture”, he says, animated by enthusiasm, “I’ve even been learning the language, although it’s really difficult: Minye zavoot Mark. Kharasho.” Among the fairy tale mosaics, silver chairs and spinning chandeliers, there are busts of Lenin, samovars and soviet posters.

‘Traditional, Russian décor’ along with an extensive choice of drinks seem to be two prerequisites of a Russian restaurant in London. Nikita’s in Earl’s Court (65 Ifield Road) has both, and a selection of themed party menus called ‘Peter the Great’, ‘Rasputin’ or ‘Baboushka’ (grandma), which generally include pies and blini, salmon and stroganov. As usual, the food is generally accompanied by serious amounts of chilled, neat vodka from ice-encrusted carafes.

Established back in 1994, Erebuni at Lancaster Gate, serves the usual array of Russian salads and eastern European fusion-foods, specialising in Armenian delicacies such as fried aubergine or dried beef. The wine list offers a bottle of classic soviet ‘shampanskoye’ for fifty quid, a steep mark up for nostalgia, and the vodka selection includes flavours like pepper and cherry.

Troika Restaurant in Primrose Hill (101 Regents Park Road) did the cheapest shots of vodka on my highly subjective (and increasingly incoherent) research bar crawl; flavours included rowan berry and (Polish) bison grass. The food is a taste of home for all eastern Europeans, revelling in smoked fish and cutlets, cabbage and coulibiak (salmon pie). The pelmeni are described as ‘Gogol’s favourite’ and served with smetana. But the menu is eclectic to appeal to an international clientele and includes taramasalata as well as buckwheat, cappuccino as well as tea with lemon and raspberry syrup. On Friday and Saturday nights, there is live Russian music. There is an early evening happy hour when shots are £1.60, but the ambience at Troika is generally designed to make clients happy, with is red walls and paintings, cosy bar and round tables.

Borshtch ’n’Tears (46 Beauchamp Place)  is a similarly homely offering, one of the oldest Russian eateries in town. Behind the restaurant, the signs promise ‘Uncle Vanya’s garden’. During August, the restaurant was shut with a cheerful hand-written note, in Russian, on the door saying ‘packed a suitcase and gone to San Tropez’. Diners’ reviews are hilariously polarised; some complain about pickled starters, slow service, dancing grannies and loud music; others love it for almost exactly the same reasons.

A few doors down, the Merchant’s Yard also roots itself in traditional Russian values. A little café with a delicatessen, their stress is on ‘old-fashioned goodness’. The window is full of domestic, Russian brands like Moya Simya (my family) juice and Alenka chocolate bars from the Red October factory. With an eye to health-conscious modern consumers, they serve up light versions of classic soups like the cold okroshka or cabbage-based schee. They also offer catering, with a mouth-watering list of canapés including lemon chicken with chervil, peppered beef, smoked halibut and – of course – blini with caviar.

Recently spotted at the unveiling of the Garagrin monument on the Mall, wielding a futuristic tray full of “vanilla and super green pannacotta served in mini Vostok 1 space capsules”, food artist Tom Wolfe caters to the tastes of party-throwers who want everything. Wolfe’s recent clients and contacts include the Russian embassy, energy giants Gazprom, Vodka firm, Stolichnaya, and the London-based Russian model, Natalia Vodianova. Conceptual food on this level comes with a high price tag and it is hardly surprising that the ‘Blue Food Produktions’ website caters specifically to Russians based in London, among whom there are famously several billionaires. That doesn’t mean you have to be a billionaire to enjoy Russian food here; an organic picnic from the Merchant’s Yard, eaten in nearby Hyde Park would be just as authentic and probably more enjoyable.