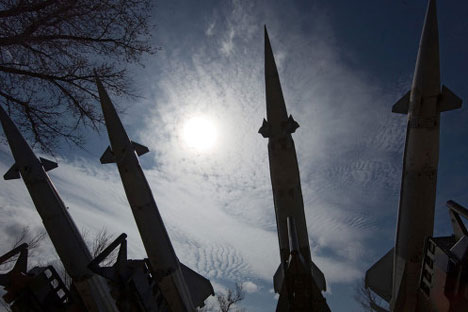 Practically no chances left to reach an agreement on missile defense.

Kommersant learned that the United States has offered Russia to sign an agreement on cooperation in the sphere of defense technologies, including creating two centers which will not only work on analyzing information about missile launches in third countries, but also make joint decisions on ways to respond to real missile threats. In Moscow, according to Kommersant’s sources, these proposals were received with skepticism. Meanwhile, a source in the Kremlin told Kommersant: “There is no chance to come to an agreement. Now we either need to create our own missile defense, or build up the nuclear forces.”

After Russia’s proposals to create a sectorial anti-ballistic missile (ABM) system with NATO were rejected by the US and Europe, the West decided to take a reciprocal step. Kommersant learned that Moscow and Washington began discussing several US defense initiatives, including those related to ABM defense. They involve Russia’s proposal to sign a defense cooperation agreement, which not only provisions information exchange, but also exchange of technologies. The fact that the parties are indeed considering this idea was confirmed to Kommersant by the US ambassador to Russia, John Byerly.

Another US initiative deals directly with cooperation in the sphere of missile defense – namely, creating two centers. One of the centers is intended by Washington to process and analyze Russian and US information on missile launches. The second center is designed to allow Russia and the US to act cooperatively in the event a missile launch is detected in a third country. Byerly has even predicted the date on which a missile defense agreement will be reached between Moscow and Washington: next year, at the Russia-NATO summit in Chicago.

In Russia, meanwhile, the chances of coming to an agreement with the US are not regarded with quite as much optimism. The US initiatives have appeared at a time when Russia seems to have lost hope in the possibility of reaching a compromise on missile defense. A high-ranking Kremlin official answered Kommersant’s question of whether or not it was possible to agree on this issue by frankly saying that such possibilities have been exhausted.

“There is no chance to come to an agreement,” the Kremlin official told Kommersant. “We offered to join forces and create a joint AMB defense. They suggested information exchange. We disagree [with this approach]. Now we either need to create our own missile defense, or build up the nuclear forces.”

However, despite this fact, Russian negotiators argue that they will try reaching an agreement until the very last moment.

“The dialogue on missile defense with the United States is faced with great difficulties,” Russia’s deputy foreign affairs minister, Sergey Ryabkov, told Kommersant. “The parties’ positions contain a wide range of elements, which are hard to bring to a common denominator.”

He acknowledged the receipt of the US proposals on joint centers as well as on defense technologies, saying that it is still too early to talk about their adoption by Moscow.
“Issues related to cooperation are considered by the Foreign Affairs Ministry as well as the defense agencies,” said Ryabkov. “The proposal to create joint centers has been made, for which we are grateful to the US. But having cooperation without a foundation is impossible.”

According to Ryabkov, in order to start working together there needs to be legal safeguards against Russia’s strategic nuclear forces becoming a target of the US missile defense – a guarantee which the US administration is not ready to provide. As for the agreement on cooperation in the sphere of defense technologies, according to the deputy foreign affairs minister, here it is also far from the final stage.

“The draft agreement is being discussed,” he said. “We are not at the beginning stages, but in the midst of negotiations. It will not be ready before Hawaii [the November 12-13 APEC summit in Honolulu, where the US and Russian presidents have been scheduled to meet].”

The need to continue negotiations has also been expressed by Russia’s permanent envoy to NATO, Dmitry Rogozin.

“The topic has not been exhausted, and while there is still a possibility, we will continue trying to reach an agreement,” the permanent envoy told Kommersant. “Until NATO passes the point of no return, we will continue to engage in talks with our partners.”

However, the diplomat is not particularly impressed with the recent US proposals.

“I have the impression that the US is interested in Russia’s groundwork developments, where we are still advancing and where we are ahead,” he said, referring to Washington’s suggestion to sign an agreement on defense technologies. “They do not want to share the information that interests us, but want to obtain the information that interests them. Meanwhile, we support the idea of parity.”

As for missile defense negotiations, the permanent envoy says that Moscow will continue to insist on safeguards.

“No matter how long the thread stretches, there is an end,” Rogozin said. “They will either have to give us some long-term credible assurances that the ABM defense is not aimed against us, or they will need to tell us that they are not giving us any guarantees whatsoever. So far, we have been hearing assurances and pats on the back… ‘Hey guys, it’s not against you.’ But it could also be said, ‘Guys, it is for you.’”