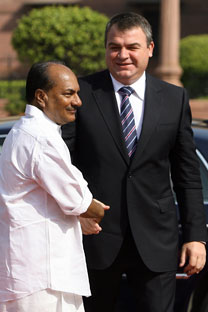 October 4, Russia’s defense minister, Anatoly Serdyukov, and his Indian counterpart, A.K. Antony, held a meeting of the intergovernmental commission on military-technical cooperation in Moscow. The event was a follow-up to the 10th meeting of the intergovernmental commission in 2010 and was an important step-up after 2009 agreement between two countries on a military and technical cooperation up till 2020. Russia is the only country to have such a long-lasting agreement with India on cooperation in this sphere.

Russian defense minister Anatoly Serdyukov was quoted as saying that “solutions have been found to a number of problem issues of India-Russia defense cooperation”. Mr. Serdyukov also expressed hope that “India is regarding military and technical cooperation as one of the key areas of partnership with Russia”. Mr. Antony in his turn noted that “Russia has always been the unique strategic partner that India relies upon”.

The ministers discussed the pending lease of the K-152 Nerpa nuclear multi-purpose attack submarine, specified the terms of completion of works on the Vikramaditya aircraft carrier – its transfer to the Indian Navy is expected to take place before the end of this year – and readdressed licensed production and overseas maintenance of Su-30MKI aircraft and T-90S tanks.

Another issue on the agenda was delivery of the aircraft carrier INS Vikramaditya (former “Admiral Gorshkov”) to Indian naval forces after modernization. Having acknowledged the scope of works performed by the Russian party, Delhi still voiced concerns about the delivery delay and escalation of the general cost of the contract from the expected value of $1,5 bln. to $2, 33 bln.

"We hope that the induction (of INS Vikramaditya) will take place, on schedule, by December 2012," Mr. Antony said emphasizing that the Indian navy is "keenly awaiting the induction of the aircraft carrier."

Nevertheless, Mr. Antony drew the attention of the Russian side to the disturbing issue of delayed export clearances for vital repair equipment for already contracted weapons systems. This has had an impact on supplies of defense equipment and spares.

However, the main topic of discussion was a multi-functional fighter aircraft, which Russia and India have agreed to create jointly on a 50/50 basis. Delhi has high hopes of this project. On the eve of his business trip to Moscow, India’s Chief Air Marshal Norman Anil Kumar Browne recalled the purchase of at least 214 of this type of aircraft – 166 single-seaters and 48 twin-seaters. India hopes to have the new aircraft in service in four to five years. Meanwhile, the FGFA project (Fifth Generation Fighter Aircraft) is called “the countries’ largest joint defense program.” In the next 20 years, the Indian government plans to invest about $35 billion in the project. This money should be enough to cover 250-300 jet fighters.

At the beginning of this year, India accounted for about a third of Russia’s export portfolio, and the value of our contracts with Delhi was close to $12 billion. In the next two years, Russia will supply 16 MiG-29 deck-based fighters and, under a second contract, 29 more units. In September, the first batch of Mi-17V5 multi-purpose helicopters was transferred overseas. Indian Chief of Naval Staff, Admiral Nirmal Verma, recently said that “more Mig-29K class air fighter air-craft and helicopters would be inducted into the Indian Navy in the next two years”.