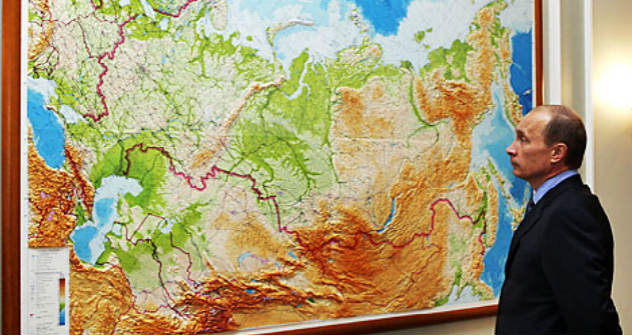 Tipping his hand on his foreign policy priorities if re-elected president next year, Prime Minister Vladimir Putin has called for the creation of a "Eurasian Union" of former Soviet countries that could serve as "a bridge" between Europe and Asia.

Tipping his hand on his foreign policy priorities if re-elected president next year, Prime Minister Vladimir Putin has called for the creation of a "Eurasian Union" of former Soviet countries that could serve as "a bridge" between Europe and Asia.

The new union would further integrate the economies of existing customs union members Russia, Belarus and Kazakhstan and gradually expand to include Kyrgyzstan and Tajikistan, Putin said in an article published in Izvestia. "We won't stop with this and have set an ambitious goal to reach the next, higher level of integration — the Eurasian Union," he wrote.

The Eurasian Union, which is supposed to become "a powerful supranational body" and "an effective bridge between Europe and the dynamic Asia-Pacific region," will welcome accession of other countries, with the CIS nations having a priority, the article said.

But it would be wrong to associate the new body with the Soviet Union, Putin said. "It's naive to try to restore or copy what has already been left in the past, but tight integration on a new political, economic and value basis is the requirement of the time," he said.

The union will be part of "a greater Europe with common values of freedom, democracy and market laws," which will provide a faster integration into Europe for its members, Putin said. He moved forward the idea of creating a free-trade zone between Russia and the European Union, which he voiced in his article published in Germany's Sueddeutsche Zeitung late last year.

In the Izvestia article, Putin reiterated that Russia and Europe could form a free-trade zone stretching "from Lisbon to Vladivostok." The article indicates that the focus of the Kremlin's foreign policy is likely to move to strengthening ties with former Soviet countries after Russia has a new president next year, said Tatyana Stanovaya, a France-based analyst with the Center for Political Technologies.

If Putin returns to the Kremlin as the country's next president, Russia is likely to pursue a tougher foreign policy focused on developing the post-Soviet region, she said by telephone. This issue is currently the No. 2 priority because President Dmitry Medvedev is largely focusing on the "reset" with the United States and the treaty on reducing the nuclear weapons, Stanovaya said.

But Putin's spokesman Dmitry Peskov said integration of the post-Soviet region does not cancel the reset with the United States, since these are two priorities of Russia's foreign policy. "Both these vectors can be developed simultaneously and independently. But the pace of the vectors' development can be different," he said by telephone.

Putin's article is "sort of a presidential manifest" aimed at outlining his initiatives after he returns to the Kremlin, said Alexei Portansky, a professor of the global economy and policy department at the Higher School of Economics. The idea of the Eurasian Union is not new because forming this body is the next integration step after creating the customs union and setting up a common economic space between Russia, Belarus and Kazakhstan, he said by telephone. But it is likely to take a while before implementing this initiative becomes possible, since the customs union has yet to prove its ability to work properly, he said. "The economic crisis in Belarus in June proved that the customs union isn't working the right way yet," he said.

The customs union has been operating as a free-trade zone since July 1, when internal customs controls were removed at the borders of its member-countries. But in a measure to protect the local consumer market, Belarus, in a severe economic crisis, restricted individuals from exporting food items and a number of other goods beyond the customs union borders in June. The country's authorities also restricted gasoline sales at the pumps.

Portansky said the move had not been agreed with the customs union commission, the organization's joint oversight body. "It's impossible to imaging this in a developed customs union. A customs union member can't make such decisions without getting a permission from the supranational body," he said.

Meanwhile Putin pointed out that the Eurasian Union could be crucial for strengthening the global economy, as "the process of creating post-crisis models for global development is progressing with difficulties." The Doha round of international trade talks "has almost stalled, and there are objective obstacles inside the World Trade Organization, the very principle of freedom of trade and the markets' openness is facing a serious crisis," he said.

The comments appeared as Russia made significant progress in its 18-year talks on its accession to the WTO. Russia, which aims to join the organization by the end of this year, has reached an agreement on meat import quotas, which have been a sticking point in the negotiations, Deputy Economic Development Minister Andrei Slepnyov said. He declined to elaborate on the conditions of the agreement, saying only that they are "comfortable" for the Russian side and "imply a certain decrease in quota deliveries compared to what we had before," Reuters reported.

First Deputy Prime Minister Igor Shuvalov, who is the country's main negotiator for joining the WTO and currently on a trip to the U.S., said Russia hopes to complete its entry into the organization this year. "We are trying to complete the deal by the end of December and, I am pleased to say, thanks to the leadership in the United States, we are closer to that goal," he told a Russia-U.S. business group in Chicago, Reuters reported.

Putin said earlier this year that Russia would not fulfill the obligations that come with WTO accession until after joining the organization. Meanwhile, his spokesman Peskov told The Moscow Times that a number of discrepancies remain before Russia can join the organization. Shuvalov said that there are "a few minor things" that are hurdles to WTO membership, and mentioned a "third party I don't want to discuss publicly.

The main obstacle for accession is Georgia's position requiring that Russia remove customs points on borders with North Ossetia and Abkhazia, Stanovaya said. Georgia is already a WTO member and has the right to block Russia from joining.

U.S. Trade Representative Ron Kirk, who met Shuvalov in Washington on Monday, expressed his hope that "remaining issues, including satisfactory resolution of bilateral discussions between Russia and Georgia, would be addressed constructively and in a manner enabling Russia to meet its objective of concluding the WTO negotiations by the end of the year," according to a statement issued after their meeting.