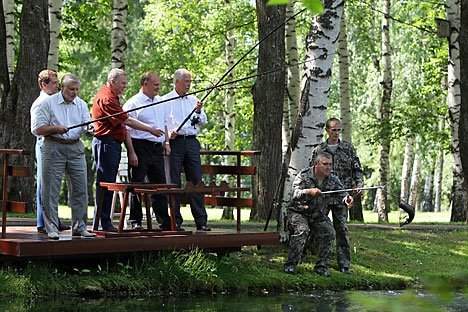 Since Vladimir Putin announced he was running for president, few have much interest in the Dec. 4 Duma elections no longer matter, but they still play a role in Russia's political landscape.

Does anyone still believe the Dec. 4 Duma elections matter? If anyone does, they must belong to a small and shrinking minority, and it’s no wonder. The announcement that Vladimir Putin is returning to the presidency next spring has consumed all the attention of the pundits and the general public.  By resolving what has long been considered as the major intrigue of the upcoming electoral cycle, the announcement has brought a sense of finality to the discussion of the future power configuration in the Kremlin.  With Vladimir Putin and Dmitry Medvedev preordained to become Russia’s next co-chiefs of the all-powerful executive branch, who would care about the composition of an inferior legislative body whose only function, according to a widespread belief, is to stamp executive orders – a body that its own speaker defined as not a “place for political discussions?”

And yet, the Duma matters – and so does its election.  The lower house of parliament traditionally plays an important role in drafting the state budget. Additionally, it provides a convenient platform for the regions to plead their cases before federal government.  This attracts to the Duma numerous lobbyists representing Russia’s special interests.  Every region or large city along with every major corporation considers it a must to have a representative in the Duma.  Besides, a position of a Duma deputy carries with it some prestige – as well as immunity from prosecution. As a result, many wealthy businesspeople seek Duma membership to elevate their public profile and to protect themselves from criminal prosecution. Parliamentarians actually fight for the opportunity to be elected to the next Duma, with the party allegiances often becoming a victim in these fights.  Thus, having learned that he was excluded from United Russia party’s electoral list for the upcoming election, high-ranked United Russia member Sergei Shishkarev offered his legislative skills to the Communist Party.  After careful consideration, the Communists turned down this generous offer.

Experts predict that the composition of the next Duma will follow a “3+2” formula.  That means that only three political parties will overcome the 7 percent threshold required to enter the Duma and form full-fledged Duma factions.  In addition, two more parties will collect between 5 percent and 7 percent of the vote and, in accordance with a recent change to the electoral law, be allowed to occupy one or two Duma seats.

The Holy Trinity of the parties whose presence in the Duma is all but guaranteed is composed of United Russia, the Communist Party (KPRF) and the Liberal Democratic Party (LDPR).  Understanding that their place in the Duma is assured – and being aware that they will not be allowed to have Duma factions whose size would threaten the domination of United Russia – KPRF and LDPR have chosen to conduct low-key election campaigns.  The electoral programs composed by both parties represent a conventional blend of demands of lavish social spending with a mild criticism of United Russia – but not Vladimir Putin personally.  Neither program includes any bold or even original propositions, unless you count KPRF’s promise to create a “new union of fraternal nations” or LDPR’s desire to ban porn on the Internet.  Looking forward to the election, KPRF is counting on the perennial loyalty of its core electorate and a solid network of regional party organizations, whereas LDPR, as usual, will benefit from the entertaining TV appearances of its leader, Vladimir Zhirinovsky, who, as all analysts agree, is in “excellent shape.”

The Right Cause party, after expelling its leader and primary sponsor Mikhail Prokhorov in an intra-party putsch, has lost any chance of getting into the Duma. Yet the party might still have a dog in the fight: The new leadership may hope that the removal of Prokhorov from active politics will be rewarded by their handlers in the presidential administration. The price would be the 3 percent of the vote, making Right Cause eligible for state financing for the next five years.  It is unclear at this point, however, to what extent Andrei Dunayev, et al. are interested in running the election campaign at all; they seem to be more preoccupied with finding legal ways to keep the 800 million rubles ($25-28 million) that Prokhorov contributed to the party coffers.

The election will be especially difficult for the Just Russia party.  Following the departure of its leader Sergei Mironov from the helm of the Federation Council, Just Russia lost the administrative resources available to it in the past. Defections of high-ranking party members and financial sponsors have further weakened the party.  At certain point, it appeared that Just Russia was moving into opposition to the Kremlin.  This hasn’t happened, though: the party’s harsh criticism of United Russia was toned down, and plans to include a number of prominent opposition figures into Just Russia’s election list were scrapped.  Apparently, the “Prokhorov affair” has taught everyone, including Mironov, a valuable lesson: Fighting with the presidential administration will only make things worse.  It is highly unlikely that Just Russia will be able to preserve its status of a bona fide Duma party.  However, winning one or two Duma seats – one for Mironov and the other for his top lieutenant Nikolai Levichev – is well within the party’s reach.

The unexpected winner of the upcoming election may turn out to be the moribund Yabloko party.  As loud whispers of the Moscow rumor mill have it, the presidential administration didn’t completely abandon its idea of having a liberal party in the next Duma. So after terminating the Prokhorov project, the Kremlin turned its eye on Yabloko and decided to appoint its leader, well-respected economist Grigoriy Yavlinsky, designated Duma liberal.  Yabloko may therefore join Just Russia in becoming the second “mini-party” in the Duma, according to the “3+2” formula.

The biggest remaining unknown is whether United Russia will be able to win the constitutional majority.  In the past, reaching this position was aided by two main factors: Putin’s personal popularity and United Russia’s formidable election campaign machine.  This year, two additional “aces” were thrown in: the All-Russia Popular Front and Medvedev leading United Russia’s electoral list.  How the two will play out isn’t completely clear: The buzz surrounding the creation of the Popular Front has so far failed to increase United Russia’s falling ratings, and at least for now, Medvedev’s name replacing Putin’s on the ballot is only confusing campaign managers.

Recent developments present a challenge for Medvedev himself.  One the one hand, as president, he promised to ensure a clean and honest election.  On the other, his very future in politics now depends on the results that United Russia achieves in December.  How this obvious conflict of interest between Medvedev the lame-duck president and Medvedev the aspiring party leader will be reconciled remains to be seen.