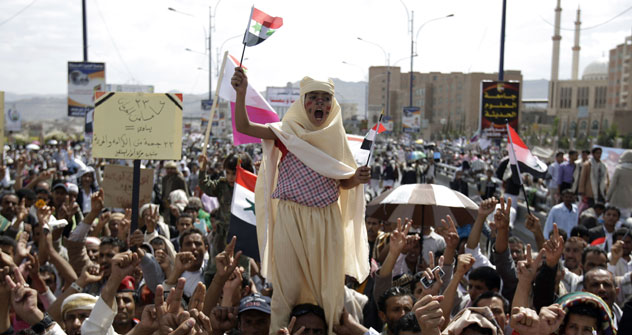 Russia supported new UN sanctions on Iran. It abstained from a vote on a Libya no-fly zone. And it firmly vetoed a Western-backed condemnation of the Syrian government's crackdown on protesters.

Moscow's decision to exercise its veto in the UN Security Council angered Washington and its allies and raised questions about whether the Kremlin was adopting a tougher foreign policy in the months before a presidential election expected to be won by hawkish Prime Minister Vladimir Putin.

But analysts said that Russia's seemingly hardening stance on UN resolutions targeting its allies — who incidentally are also major buyers of Russian weapons — mainly signaled a return to a well-established Kremlin line.

In Moscow, the Foreign Ministry countered criticism over its Syria veto by announcing that it would host two Syrian opposition delegations this month and condemning President Bashar Assad's crackdown as "unacceptable."

"We have warned from the beginning that efforts to turn what happened with the UN resolution on Libya into a model for action by Western coalitions — NATO — is absolutely unacceptable," ministry spokesman Alexander Lukashevich told reporters.

Announcing the upcoming opposition visits, Lukashevich insisted that Russia had not become an "advocate" for the Assad regime, saying Russia's misgivings about the European-drafted resolution on Syria had been "repeatedly ignored."

Russia and China both used their Security Council vetoes to block adoption of the resolution proposed by Britain, France, Germany and Portugal, saying it was "one sided" and smacked of an "ultimatum."

The European countries replied that they had done everything possible to come up with a draft acceptable to Russia, including removing all references to sanctions, ruling out the use of military force and calling instead on "all sides" to reject violence.

The double veto prompted the U.S. ambassador to the UN, Susan Rice, to deplore the "cheap ruse by those who would rather sell arms to the Syrian regime than stand with the Syrian people."

British Foreign Secretary William Hague used a keynote speech at a party convention Wednesday to accuse Russia and China of "siding with a brutal regime."

The last time Russia and China jointly vetoed a resolution was in July 2008, when they opposed sanctions against Zimbabwe.

Kremlin spokesman Alexei Pavlov, reached by phone, reiterated concerns voiced by UN ambassador Vitaly Churkin on Tuesday that the Syria resolution was "based on a philosophy of confrontation" and failed to urge the country's opposition to disassociate itself from "extremists" and start negotiations.

Analysts said Russia was following its normal foreign policy line after the "strange and untypical" decision to abstain from the vote on Libya.

"What Russia did in Libya was an exception," said Fyodor Lukyanov, editor-in-chief of the Russia in Global Affairs magazine. "After they saw how quickly the no-fly zone turned into full-scale military action, they returned very firmly to the line of avoiding anything that could lead to unintended consequences."

Russia and China both abstained from the March 17 vote on Resolution 1973, which paved the way for military action against Libya.

Putin quickly accused NATO of using the abstention to launch a "crusade" in Libya. The remark earned a sharp rebuke from Dmitry Medvedev, who as president is responsible for foreign policy, and sparked speculation of a rift between the two. Putin announced late last month that he planned to run for the presidency in March 2012.

Libya was probably only a "tactical" deviation from a long-held foreign policy doctrine of opposing any kind of revolution, said Pavel Bayev, an analyst with the Peace Research Institute in Oslo. "At that point, there was some nervousness that they would be backing the losing horse if they opposed the uprising against Gadhafi," he said by telephone.

He said Gadhafi's tenacity might have convinced the Kremlin that the fall of Assad's regime was not inevitable — and convinced it to return to its cast-iron policy that "all revolution is evil."

"Russia is interested in building a counter-revolutionary alliance with China and some Middle Eastern monarchies," he said. "And from that point of view, it is probably more worried about Turkey's position than criticism from Europe or the United States."

Turkey, which neighbors Syria, announced that it would implement unilateral sanctions despite the veto.

There also were strong self-interested reasons for Russia's reluctance to countenance regime change in Syria, said Timofei Bordachyov, director of the Center for Comparative European and International Studies at the Higher School of Economics.

Among other things, Syria hosts Russia's only naval base in the Mediterranean — and its only one outside the former Soviet Union — at the port of Tartus.

And there are also strong financial links.

Russia's embassy in Damascus reported exports to Syria worth $1.1 billion in 2010 and investment in the country valued at $19.4 billion in 2009. Companies running operations there include Tatarstan-based oil company Tatneft, which began pumping Syrian oil in April 2010 through a joint venture with Syria's national oil company and said in January that it would spend $12.8 million drilling exploratory wells near the Iraqi border.

Other contracts include gas facility construction company Stroitransgaz, with projects worth $1.1 billion; Uralmash's Drilling Equipment Holding, which has been exporting to the country for the past 14 years; and water engineering firm Sovintervod, which has been linked to Syria since the Soviet era.

Despite Russian rebuttals, Rice was on to something when she brought up arms contracts.

According to data from Moscow Defense Brief, Russia has more than $4 billion in active arms contracts with Syria, including for MiG-29 fighters, Pantsir surface-to-air missiles, artillery systems and anti-tank weaponry.

State arms exporter Rosoboronexport has complained that it lost $4 billion in sales to Libya because of the uprising there this year. Russia's approval of a UN resolution to slap new sanctions on Iran in June 2010 cost it a lucrative contract to supply the Islamic republic with S-300 anti-aircraft missile systems.