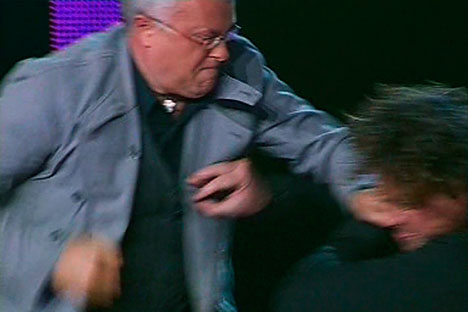 "In a critical situation, you don't choose: I don't see any reason to get hit first if you know it's coming," - Lebedev. Source: Reuters / Vostock Photo

A criminal case has been opened by the Russian Investigative Committee against Alexander Lebedev, 52, the owner of British newspapers The Independent and Evening Standard, as well as a member of a district legislature in Central Russia’s Kirov region.

According to investigators, Lebedev inflicted bodily harm against Sergei Polonsky while participating in the “NTVishniki” talk show on September 16, the statement reads.

The criminal case was started under an article on hooliganism found in the Russian Criminal Code. The maximum punishment for hooliganism in Russia is five years in prison, or the guilty party may instead be fined in the amount of his annual income, which in the case of Lebedev could be a substantial sum.

In 2008, Russian Forbes magazine estimated Lebedev’s worth at $3.1 billion dollars.

The incident between the two businessmen occurred during an emotional exchange of opinions on the fate of business in Russia. Suddenly, Lebedev, who later said he was defending himself, punched Polonsky in the face, sending the wealthy developer off his chair and onto the floor. Lebedev later said he was defending himself, claiming he thought he was going to be attacked first. He also added that Polonsky had been overly aggressive during the discussion.

Polonsky was heard criticizing Lebedev and other guests, and at one point said that a remark from the studio audience put him “in a mind to punch someone's face." Lebedev then inquired whether the remark was directed at him.

And as the other businessman attempted to calm him, the media tycoon sent him sprawling from his chair, punching him twice.

The NTV channel advertised the incident heavily for several days and showed it in full in the prime-time program.

Polonskiy said he was going to sue Lebedev while the banker maintained in his blog that he did nothing wrong.

The fight caused broad public response and last week even Prime Minister Vladimir Putin made a joke about it. When the head of the Russian Union of Industrialists and Entrepreneurs, Aleksandr Shokhin, asked the Prime Minister what was his opinion about the incident Putin laughed and said this was pure hooliganism. “We have a front, but we do not attack anyone,” Putin said. “They do not have a front, but they punch each other in the ear. Hooliganism,” the PM added.

Lebedev replied with an open letter in which he accused Shokhin of deliberate disinformation of the Prime Minister. Shokhin said that Lebedev “luckily” is not a member of the Union of Industrialists and Entrepreneurs and Lebedev insisted that his company National Reserve Corporation is a member of the Union and is listed in its papers.

Lebedev also said that the Union had never rendered him any help in difficult situations and demanded that Shokhin either publicly refuted his words or returned 3,775,000 rubles (over $120,000) that Lebedev’s company had transferred to the Union.

To this Shokhin replied that while the company is listed as the Union member, it is not headed by lebedev, but by its General Director Viktor Nekrasov and therefore the information presented to Putin was correct.