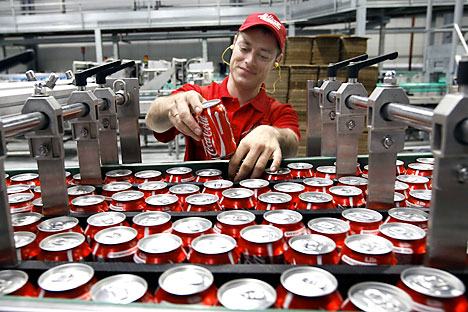 With the addition of a production facility in the Southern city of Rostov, Coke hopes to take more of the growing Russian soft drink market.

On Sept. 26, Coca-Cola opened another plant in Russia. The complex, located near Rostov-on-Don, stands out against the backdrop of the southern Azov steppes with its trademark red color. Residents of the nearby village of Kuleshovka joke “Even the communists didn’t have such a red plant.” The communists, however, could never have opened such a powerful enterprise, even if they wanted to.

Despite the number of people employed by the plant, which is modest by Russian standards, the facility’s production capacity is 450 million liters of beverages a year, and the area of the complex is 26.5 hectares. Rostov-on-Don is one of the largest cities in southern Russia, but the Coke facility will easily be able to provide it and the surrounding area with soft drinks. At the moment, the plant is only running three production lines, but by 2014 all eight should be fully operational. Even in its current mode of operation, however, the plant produces 78,000 bottles of soda, and almost the same number of cans, per hour. The complex also houses the most powerful wastewater purification facility in Russia.

Since its entry into the Russian market in 1994, Coca-Cola has invested more than $3 billion in the local economy. At the opening of the new plant in Rostov, it was announced that the company intends to invest the same amount over the next five years. In a statement made during the plant’s opening, Chairman and CEO of The Coca-Cola Company Muhtar Kent said: “The Coca-Cola Company is proud to be serving this great nation’s140 million-plus consumers. Our system is part of the fabric of Russia’s economic development and we continue to invest in Russia to create jobs and stimulate growth across our supply chain. Today’s announcement underscores the Coca-Cola system’s long-term strategy of investing in Russia.”

There is, of course, an ulterior motive for the company’s activity in Russia. It seems that Coca-Cola is seriously interested in emerging economies. This is not surprising – the situation in the U.S., the company’s home territory, is not as conducive to maintaining big business. Kent named political stagnation and the outdated tax system among the causes for the declining competitiveness of the U.S. market. According to Kent it is “in many respects” easier to do business in China. He has also hailed Brazil as a shining example of developing economies that are attractive to investors. “They are learning very quickly, these countries,” said Kent. “In the West, we have forgotten about what really worked 20 years ago,” he added. This is why The Coca Cola Company has decided to invest in emerging markets, mainly in the BRICS countries.

And Russia is the most telling example here. Coca-Cola and Sprite have traditionally been popular in the local market, but the company’s desire to dominate is so strong that it has decided to start producing the traditional Russian drink Kvas. By doing so, Coke hopes to gain on PepsiCo, which has a 3 percent lead in market share at more than 29 percent. Despite the fact that PepsiCo has fewer plants – only six – it greatly expanded its local power last year with the purchase of Wimm-Bill-Dann, the country’s largest producer of juice and dairy products.

“Until recently, Coca-Cola was ahead of PepsiCo, its largest, and in fact only, competitor in the Russian market,” said financial analyst Kirill Bezverkhy. “However, after the takeover of Wimm-Bill-Dann, the situation reversed. It seems to me that the management of Coca-Cola needs to implement a new strategy to build loyalty among Russian consumers. It is necessary to focus first and foremost on youth as an indicator of the market. Whoever wins their hearts will win their wallets. I would recommend paying attention to the energy drinks sector.”

Despite the fact that Coca-Cola’s portfolio of brands includes the energy drink Burn, its share of the Russian market is extremely small – only 15 percent. Adrenaline Rush from PepsiCo has carved out nearly a 30 percet share, and Red Bull is in second place, with 25 percent. Red  Bull, for its part, recently decided to meet the two soft drink giants on their own turf, and began selling its own brand of cola in Russia.

It will be an uphill battle. Recently a number of articles have appeared in the country’s press discussing the dangers of energy drinks, and Prime Minister Vladimir Putin has made a point of promoting a healthy lifestyle. And out of all the players on the market, The Coca-Cola Company already has a reputation as a drink for healthy people – it has been working with the Olympic movement for 92 years. And of course, this support will be extended to the 2014 Olympic Games in Sochi. In addition to this the company also supports a number of other sports projects in Russia.

Political analyst Andrei Vinogradov believes that in developing countries, large corporations are attracted not only to the market but also to the possibility of such close cooperation with the government. “Such interaction in most Western countries would be unthinkable,” said Vinogradov. “The company would be unnecessarily accused of colluding with the authorities, and of other deadly sins. Here, in Russia, we do not see anything wrong. Logically, if the company invests in the country, then in the end it will get some positive feedback. This is why big business reaches out to us, because here we treat it like human beings, rather than engaging in a whirlwind of social and political prejudices.”