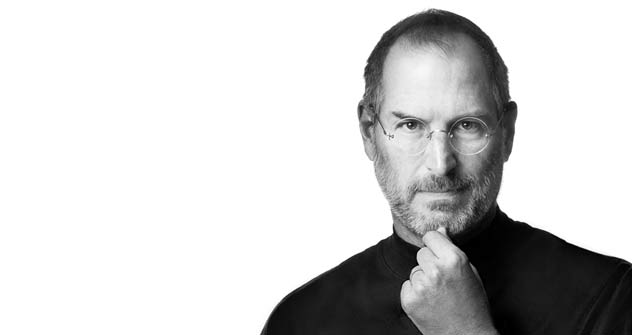 Apple founder and ex-CEO Steve Jobs died at the age of 56 on October 6, 2011, Apple said on its website.

Apple didn't always make the best product, but the company is legendary for making the public want what it was making.

The cause of death was not disclosed, but Jobs struggled with cancer since 2003. He underwent a successful surgery in 2004 and a liver transplantation in 2008, RIA Novosti reported.

"Apple has lost a visionary and creative genius, and the world has lost an amazing human being," the company said. "Steve leaves behind a company that only he could have built, and his spirit will forever be the foundation of Apple." "Steve's brilliance, passion and energy were the source of countless innovations that enrich and improve all of our lives. The world is immeasurably better because of Steve."

Condolences came from all over the world, including U.S. President Barack Obama, as well as from friends, colleagues and rivals.

Steve Jobs is one of the greatest examples of success in the history of American business. He dropped out of college after one year, and never received a degree in technology. The future Apple CEO earned his living by collecting empty bottles before he started working at a company that produced video games. Jobs and Stephen Wozniak founded Apple Computer in 1976. Its products gained a cult following for several consumer generations all over the world.

The announcement on Aug. 24 that Apple CEO Steve Jobs felt compelled to resign, apparently on health grounds, was met with sadness by industry experts, who rushed to praise Jobs as not just the driving force behind a company which this summer briefly became the most valuable in the world, but also as a visionary in the sector and even the greatest industrialist of the last 20 years – or ever.

But are the paeans justified, or is it all just hype? Apple certainly stands out compared to companies such as Microsoft and Google, which are also highly successful, but which have never won people’s hearts and minds. In fact, outside the business world, they have never even come close to creating a cult of their CEOs or their products. They might be respected, even feared, but never loved.

That is the big lesson to be learned from Steve Jobs and Apple, both for other companies, and for countries such as Russia, which is now trying to jump onto the innovation and high-tech bandwagon.

But for all their technical expertise, many in the industry are woefully ignorant of history and are far too young to have experienced anything else at first hand. In fact, many modern products are by no means as revolutionary – or as good – as they seem to be.

Take the iPod. The BIG breakthrough in personal music on the move was the Sony Walkman. Before that, the choice was between ghetto blasters, bulky cassette decks and tinny portable radios. The title of Deep Purple’s classic 1972 live album “Made in Japan” was a dig at the lousy quality of electronics from the Far East. How times have changed!

The Walkman was a quantum leap forward due to its astonishing sound quality, and I still prefer the weight and feel of my old clunky Walkmen to the sleek and austere design of my two iPods. Of course, the iPod is self-contained – you no longer need to carry around spare batteries and cassettes, and the latest, 160GB iteration of the iPod Classic can store 40,000 songs.

But for real music fans, the top-of-the-range Walkmen had two major advantages over the iPod: They came with excellent headphones and had a better frequency response, which includes the inaudible overtones vital to the full enjoyment of music. The Walkman Professional of the early 1980s took things to yet another level and was beloved by hi-fi fans and journalists for its astonishing reproduction, recording quality and sturdiness – I dropped mine onto solid concrete twice and it suffered no ill-effects. Sony stopped its production only in 2002.

Another thing the iPod – and most computers – cannot do is to replay instantly a passage of music or speech like you could on most old tape recorders by pressing “rewind” while in play mode. This is invaluable for musicians and for journalists transcribing interviews, but try it with a digital recording on a computer, and you can hear the hard drive chugging away, trying to cope.

Apple’s real revolutionary product was not the iPod, but iTunes, an innovation that saved the recording industry from extinction and put Digital Rights Management (DRM) on a firmer footing.

But in a classic case of agency capture, legislators throughout the western world bought into the geek argument that the Internet must be (a) free for all instead of doing their job properly and protecting the livelihoods of those who produce the music, films and books we all enjoy.

The idea that copying and distributing film and music digitally is somehow different from photocopying books and re-recording music on cassettes was fallacious from the start and has also led to huge feelings of entitlement, with results that are becoming ever clearer, such as the vast quantities of junk education and news now polluting the Internet. And it is ironic that western governments support companies’ bitter complaints about the rampant piracy in China, and yet have fallen short on protecting intellectual property rights at home.

Still, it is very hard to argue with Apple’s phenomenal success. It makes sexy, high-margin products bought by millions the world over, and ultimately, that is what business is all about.

Copying this trick is hardly easy, even for world-class firms, and leadership can pass very quickly from one company – or country – to another.

Russia is now trying to modernize and is hyping its Skolkovo project just outside Moscow at home and abroad as the country’s answer to Silicon Valley, but there is massive skepticism domestically and internationally. Russia has precious few firms outside oil, gas, metals, mining and banking, and high-tech companies are conspicuous by their absence.

Instead of fixing this by proper reforms at national level, as usual, the approach to Skolkovo is Soviet – a government-led project approach which pumps in large financial and other resources.

The Russian oligarch and TNK-BP shareholder Viktor Vekselberg has said that Skolkovo had received a promise of $3 billion in government funding over the next three years. The aim is to raise the same amount from private sources, including major multinationals - Siemens, GE and Nokia-Siemens have said they would build R&D centres at Skolkovo and invest up to $50 million each.

But Russia’s brightest and best are leaving the country in droves. Some 40,000 Russians work in Silicon Valley alone, and estimates are that something like 300,000 emigrate every year. And outside the tech sector, it’s also worth remembering that developing just one new drug costs half-a-billion, so $3 billion or even $6 billion won’t go far.

Nor do Russia’s leaders understand science and technology. Both Medvedev and Putin have said, for instance, that money invested in R&D should produce results and not be wasted, but risk is the name of the game. There can never be any guarantee of success, and scientific and technological progress often results from sheer serendipity – it cannot be planned.

Russia has wasted years since the Soviet Union in its still unsuccessful search for a national vision, so it is just learning to “talk the talk”, but “walking the walk” across the board will be much harder. German Gref, a former minister of economy and now head of Sberbank, Russia’s official savings bank and biggest financial institution, said on Vladimir Pozner’s late-night talk show that a domestic car industry would take at least 15 years to create.

At the end of August, AvtoVaz, one of Russia’s biggest car makers, made a small step forward by hiring Steve Mattin as Chief Designer. Mattin has previously worked at Mercedes-Benz and Volvo; he will start work in October. It will be fascinating to see if he can do a Steve Jobs and transform AvtoVaz into a high-tech car company.