An Ordinary Execution: A fictional French look at Russia’s corridors of power 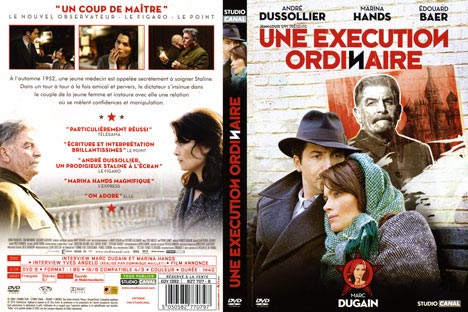 A few years ago, this writer overheard a conversation at a popular cafe near Moscow’s Paveletskaya train station in perfect French, complete with Parisian accents from a good part of the city. The illusion that these were just some French tourists visiting the Russian capital was shattered when they spoke to the waitress in completely unaccented Russian. These young Russians, who were as comfortable in French as they were in their native language, could indeed be called successors to Dostoyevsky’s circle of friends from the 19th century.

The relations between common Russians and Frenchmen have been defined by a fascination with and a curiosity to know more about each other’s countries and cultures. It’s probably this fascination that led French writer Marc Dugain to write ‘Une Execution Ordinaire’ (An Ordinary Execution), a book that looks at the nature of political power in Moscow from Stalin’s time to the present day. The result is a terrifying and gripping novel where an ordinary family comes face to face with extraordinary events over the span of 5 decades.

Anna, a Moscow-based urologist who is believed to have extra-ordinary healing powers, is forced to treat Josef Stalin before he gets a fatal stroke.  Anna is made Stalin’s top-secret personal physician with an intimacy where he demands that she shrug every other relationship in her life. Stalin is portrayed as being extremely paranoid and ends up having Anna’s husband, mother and uncle arrested by the secret police. Constantly living in fear of getting arrested or deported to a labour camp, Anna also treats her husband poorly in a futile attempt to save him from the dictator’s henchmen.

Anna’s son (the narrator) is a depressed history teacher at a school in a military base near the Barents Sea. His life gets worse when his son dies on board the nuclear submarine Kursk in 2000. In between, we read about the recruitment of officers to the KGB in the 1980s and about an officer called Vladimir Plotov, who would become president of the country (an obvious parody of Vladimir Putin).

While the book is undoubtedly well-written, given the fact that this is essentially a Westerner’s take on Russia, a pinch of salt would assist the reader. Dugain, who is best known for his book ‘The Officers’ Ward,’ tends to paint all his characters with extreme colours. If the author were to be believed, we could assume that very little has changed in Russia since the time of the Stalinist purges. Present day Russia is portrayed as a mediocre police state with a corrupt bureaucracy that supports the iron fist with which the country is ruled. Most Russians and outsiders familiar with the country would laugh at what the author implies in this respect.

It’s a widely accepted fact that Stalin was a tyrant, but Dugain’s portrayal might just be overdoing it. In the book, Stalin wanted Anna to be ‘eliminated’ when he felt he had little use for her. Are we talking about the same person who asked the police to leave “cloud-dweller” Boris Pasternak alone? Yet Dugain’s portrayal of Stalinist rule appears, at other times, accurate enough to look like the work of an insider.

As part of his plan to make a series of films on the book, Dugain adapted the first chapter into a film, which he directed himself. The film, which shares the title of the book, eyes in on the relationship between Anna and Stalin. Andre Dussollier, who is known for his positive roles, acts as Stalin in a performance that must rank as high as Ben Kingsley’s portrayal of Mahatma Gandhi in Richard Attenborough’s biopic of the great leader.  Marina Hands plays the role of Anna in what can also be described an outstanding performance. The film is as terrifying as the novel and is a brilliant portrayal of the climate of fear that ordinary Soviet citizens lived under in the 1950s. Watching Anna’s horrifying encounters with Stalin in dark interiors to the sound of Mozart’s Piano Concerto No. 23: Adagio, may just lead to some degree of dizziness and discomfort. This is probably where Dugain has scored the highest.

Dugain has also been busy promoting a theatrical adaptation of the book in Paris and Barcelona. Judging by how the book and the film convey the author’s powerful message, the play should also make for quite a show.