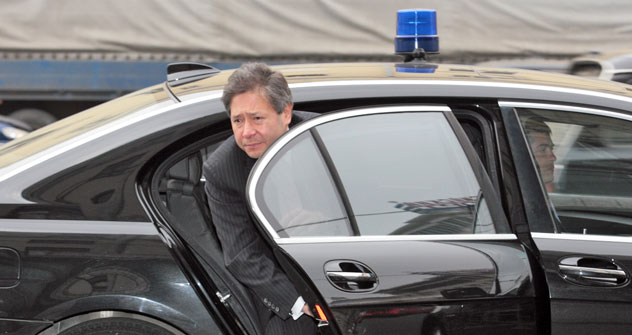 Experts and activists alike see elite infighting, rather than grassroots pressure, behind a wave of "migalki" checks in Moscow.

Russia’s law enforcement services have recently declared war on “migalki,” the blue flashing lights on many of Moscow’s luxury cars that have become a symbol of elitism on Russian roads. Some say that document checks for cars sporting the flashing lights in central Moscow are the first hint of a pre-election campaign to court support from Moscow’s frustrated automobilists. Others, however, insist that the only important opinions here are those of real “migalki” owners, who are waging war against those illegally taking advantage of this elite privilege.

From September 27 through October 4, many of Moscow’s privileged drivers faced an unprecedented situation. On roadways near the Kremlin, the police pulled over government officials’ Audis and BMWs and checked documentation for their specialized license plates and flashing lights. The official results were announced yesterday: more than 1,000 vehicles were inspected, and only ten sirens were confiscated, along with 65 sets of falsified documents, including obvious forgeries. Take, for instance, one driver of a Mercedes S-Class, who presented himself as “general-lieutenant, chairman of the council of great military leaders of the Interior Ministry.”

While these numbers don’t point to a huge success (activists suggest there are thousands of unlicensed sirens in Moscow alone), the results are notable for being one of the first times when police aggressively questioned Moscow’s highway aristocracy, who jet around traffic jams by speeding down lanes meant for oncoming traffic. Almost all of Russia’s major law enforcement services got in on the action, with reports that the Interior Ministry, the FSB, the traffic police and the presidential security services worked together in the crackdown.

Privileged drivers are at the root of Moscow’s serpentine traffic jams and deadly hit-and-runs, say activists. Examples of outrageous violations have cropped up each year, often as law enforcement turned a blind eye to the rights of regular drivers on the roads. One of the most visible incidents occurred last year on Leninsky Prospekt in Moscow, when two well-respected gynecologists were killed in a head-on collision with a LUKoil executive’s armored Mercedes. Police arriving at the scene immediately absolved those in the Mercedes of complicity in the accident, leading to a public outcry for greater checks on privileged drivers.

More recently, the emergence of grassroots organizations, like the Blue Buckets Society, which stages protests and regularly uploads videos of traffic infractions carried out by vehicles with sirens to the Internet, has begun to turn the tide on the issue. When a Mercedes and Jeep mowed down and killed four migrant workers as they sped toward a local Moscow airport this year, a video of a partial license plate was given to the group, which led it to a pair of vehicles belonging to the Avangard Bank in Moscow. After this information was posted online, the bank released a statement saying that employees of the bank were involved in the accident – while they claimed that no main officials were travelling in the vehicles at the time, the bank’s statement nonetheless signified a small victory for the activists.

With the popularity of the Blue Buckets movement exploding last year (close to 40 percent of Russians said they had heard something about the group in a poll taken last October by the Levada Center), some saw the recent move by law-enforcement to clamp down on unofficial “migalki” as an early attempt to court public opinion, as Russia enters election season. “This is just a regular, populist action in the run-up to the elections,” said the Head of the Federation of Automobile Owners of Russia Sergei Kanaev, reported Interfax. “It has nothing to do with enforcing order on our roads.”

Pyotr Shmukatov, the coordinator of the Blue Buckets society, is likewise skeptical about the effectiveness of the short-term checks. Yet far from calling it a reaction to the group’s growing popularity or an election tactic, he said the checks were induced by a fender bender between a banking executive and a government official, both of whom had flashing sirens on their cars, although the banker’s were illegal. When both cars refused to give the other the right of way on an undeclared lane in the middle of the road, they sideswiped one another. The Moscow daily Kommersant upheld this version, adding that an official from the Presidential Secret Service owned the BMW with the official flashing light, which led directly to the imposition of the checks.

Despite rising membership in grassroots movements like the Blue Buckets Society in Russia, it was the “migalki” owners concerned about their personal interests who imposed the checks, said Pavel Salin, an analyst at the Moscow-based Center for Political Assessments. “This only became an issue for the government when those in possession of ‘migalki’ saw their own interests endangered,” he said. “That’s when they began to set to the task of taking care of this issue. Before that, they couldn’t have cared less about the rights of drivers. I’m afraid that here, any public activity like this serves either to protect the interests of those in power or in struggles between elite groups,” Salin added.

And despite the consolidated effort to go after owners of fake documents and sirens, activists have remained unimpressed by what has been announced as only a temporary campaign. “Ten confiscated illegal ‘migalki’ – that’s nothing in comparison with their actual number,” Kommersant quoted Shkumatov as saying.