The real cost of modernizing the military 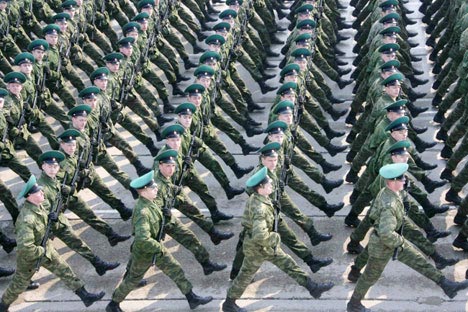 Throughout the summer, a serious conflict broke out between military manufacturers and the Defense Ministry over the fulfilment of weapons contracts for the state’s defense and rearmament program through 2020.

There are three main reasons for the crisis. First, this is the first time during the post-Soviet period that the military has tried to purchase weapons five to 10 years in advance. The Defense Ministry has no prior experience in creating a large-scale military-industrial program in a market economy. For example, the military has not been able to produce the required number of economists and pricing specialists for products with long production cycles — that is, individuals who can properly factor currency fluctuations and inflation into the end cost. At present, only state arms trader Rosoboronexport has such specialists, and that agency has already discovered the need to predict and hedge against macroeconomic risks in the pricing of its long-term contracts.

The second reason for the crisis was the reform of the Defense Ministry’s method of making procurements. In the old system, the armed forces command was responsible not only for placing orders and approving prices, but also monitoring how the orders were carried out. Placing responsibility for orders and implementation in the same set of hands proved to be highly inefficient, leading to rampant corruption and defense contracts going largely unfulfilled.

A new system is now being created in which the military leadership only sets the technical specifications for weapons orders, with the legal and pricing departments handling the terms of the contract and the price. That system is not yet fully developed and will require some time to have a positive impact on the arms procurement process.

The third reason for the crisis was the appointment of former Deputy Defense Minister Vladimir Popovkin as head of the Federal Space Agency. Popovkin, who is arguably the Defense Ministry’s best business manager, played a key role in developing and approving the government arms procurement program through 2020, and it would have been logical for him to implement it. Unfortunately, the situation in the space industry had become so dire that the decision to hire Popovkin was necessary for the space agency but a big loss for the Defense Ministry.

This summer’s conflict was nothing but a crisis of transition from one system to another — from the inefficient and corrupt system inherited from a planned state economy to a market-based economy with large-scale, long-term procurements. This crisis is strictly organizational in nature and can be overcome with time.

Former Finance Minister Alexei Kudrin has focused on the far more basic but very serious problem of increased military spending, including weapons purchases. The planned spending of 20 trillion rubles ($610 billion) to modernize the army over the next 10 years breaks down to an average annual cost of $61 billion. By comparison, France and Britain — both of which have economies larger than Russia’s — spent only about $26 billion last year on their militaries, and even that figure will decrease as they trim their defense budgets.

The problem is that Russia plans to increase spending not only on weapons procurement. It also wants to increase the number of contract soldiers and their wages, improve living conditions for service personnel, outfit the army with new uniforms, feed the troops better and outsource the countless mundane chores that soldiers have traditionally performed. Combat training will also be lengthened and expanded, planes will remain airborne longer, and ships will spend more time at sea.

Russia will have to spend more than 4 percent of its gross domestic product to compensate for the past 20 years of underfunding, neglect and degradation in the military. But pumping that much money into rearmament and modernization is unacceptable in a country with a crumbling infrastructure and badly underdeveloped education and health care systems. If Russia were to spend 4 percent of its GDP on modernizing the military for one or two years, it would be difficult from a budgetary point of view, but tolerable. But if this spending pace is allowed to extend any longer than that, we can forget about modernizing the rest of the country.