Russia’s biggest steelmaker to build a plant in India 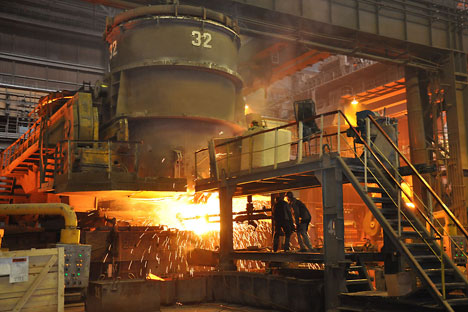 NMDC has announced that an agreement on a 50/50 joint venture with Russian steelmaker Severstal to build a 3 mn tonne a year steel mill in the Indian state of Karnataka is to be signed in December. “We will sign an agreement in December under which our partnership is defined as a parity (50/50) owned joint venture”, NMDC Chairman Rana Som said. The JV will produce steel for the car manufacturing and electrical engineering industries.

A memorandum of understanding with Severstal on establishing a steel mill in Karnataka was signed last December.

Severstal CEO Alexei Mordashov announced at the St. Petersburg Economic Forum last June that investment in the project would reach $2 bn in the initial stages, with the original capacity of 2.5 mn tonnes expandable to 5 mn tonnes going forward. He said the JV would use locally sourced feedstock.

The Russian executive mentioned that his other company, Power Machines (SILM), was also considering production localisation in India.

Severstal used to focus its overseas expansion strategy on the developed markets in Europe and America. A shift eastward has now become apparent. “Urbanisation and industrialisation in developing countries are an obvious long-term trend,” Mordashov said in an interview. “Today’s demand for iron ore has been generated by China, which now accounts for half the world’s steel output. We have selected India, a rapidly growing market complete with sources of raw materials and opportunities for vertical integration.”

Severstal made its new strategy public at the end of September. The company has decided to discontinue investments in diamonds, niobium, nickel, and other non-core assets, focusing on steelmaking and feedstock extraction instead.

Severstal is striving to become a top five global steelmaker and envisages investing most heavily in raw-material projects. Production of iron ore and coal needs to be increased, since their share in the cost of steel production has been on the rise lately.

The company has identified Russia, India, and Brazil as the most attractive locations for steelmaking. It also sees potential in South East Asia, where per-capita steel consumption is low (around 80 kg in 2010) but is expected to increase thanks to rapid urbanisation.

Severstal plans to become a top five global steelmaker by 2015 in terms of EBITDA, according to its presentation for a capital markets day in London. The company was in the eighth spot, with $3.3 bn, based on 2010 results, one notch below Nippon Steel ($3.4 bn), with ArcelorMittal on top ($8.5 bn) and Baoshan in fifth place ($4.2 bn.)

According to a Severstal spokesman, the business system currently being implemented will allow the company to earn an additional $1–1.2 bn of EBITDA by 2015. Its business strategy envisages production cost cutting, enforcement of manufacturing standards, M&A deals, and safety improvements, among other things. Even so, the strategy does not reflect the company’s plans to launch new production sites, the spokesman said.

Severstal Russian Steel, which the company expects to become Russia’s biggest steel producer by that time, will earn the bulk of this amount ($950 mn.) Russia will remain a net steel exporter, while domestic consumption will grow according to a developed-market pattern, Severstal said. Russia’s steel consumption will rise to 51.8 mn tonnes by 2016 from 36.4 mn tonnes in 2010, with car manufacturing accounting for the bulk of the increase with 11.3%, followed by construction with 6.8%. The share of value-added products will thus amount to 48%. Domestic sales will rise to 77% from 54% in 2010.

Severstal Resurs will earn another $200 mn of EBITDA, with America accounting for the rest.