Space Troops' Day: many celebrations ahead 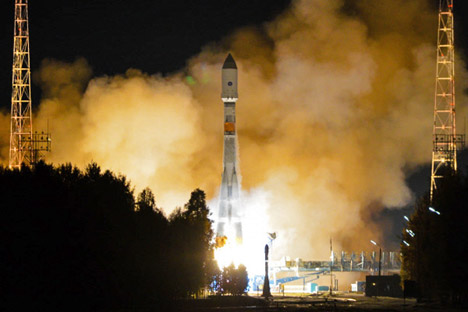 The tenth and possibly last time Russia's Space Troops have celebrated their professional holiday in its current format. Armed services reforms may well create a new branch of the service, one that would include the Space Troops. Maybe this will require a new holiday.

On Earth, in the atmosphere, and beyond

The Space Troops are in for a major reshuffle soon. Following a decision by President Dmitry Medvedev, the combined Aerospace Defense Force (ADF) is to be established under a single command by December 1, 2011.

In addition to the Space Troops, the ADF will also comprise forces and contingents that have been shuffled around organizationally for decades because their unique character or because the scale of their missions have defied all efforts to design a common framework.

The new ADF Command will exercise operational guidance over the Air Force's defense units (which have already been officially renamed "ADF brigades"), the Combined Strategic Command of Aerospace Defense and the former Air Force Special-Purpose Command, or, in simpler terms, Moscow's air and missile defenses. The ADF will also manage the Missile Attack Warning and Space Surveillance systems.

The resulting organization will then have enough authority to operate both within the Earth's atmosphere and beyond it.

This in-depth defense system will handle both radar and optical observation facilities and all types of surface-to-air missiles designed to attack air targets (from smaller to long-range heavy missiles), as well as atmospheric and exo-atmospheric anti-missiles.

The original idea was to put all aerospace defense forces under the Space Troops. Now the situation has changed slightly: all weapons and armaments are being left in their fighting branches, but their control will be handed over to a single center.

And this center will be the ADF Combined Strategic Command. A separate Space Command will be set up within it, according to Space Troops Commander Oleg Ostapenko. This somewhat differs from the statements made early in 2011 that ADF forces would be based on the space troops.

It is as yet difficult to assess the prospects that will result from the latest changes. In principle, the command of Moscow's ADF area (or whatever it has been called over the long years of its existence) is the only military structure among the future components of the country's ADF that has many years' experience in operating diverse combat and information-gathering facilities, which, moreover, are on constant combat alert. Their inventory is wide and varied: A-135 anti-missile systems, surface-to-air missile units, interceptor-fighter regiments, radar units of all kinds, and single control and command centers.

Military Space Forces must have their own niche

It looks like the ADF is going to be based on Moscow's air and missile defense area command. But the Space Troops also have missions not directly related to aerospace defense. The Space Troops were created in 2001 and combined such disparate components as the Military Space Force and the Space Missile Defense and Missile Attack Warning systems.

In 2001, the Military Space Force was again taken away from the Strategic Missile Troops to serve as the basis for the Space Troops. It also included the Missile Attack Warning and Space Surveillance systems and air defenses, which, it now appears, are to be put operationally under the ADF Combined Command.

Time will tell if moving the Military Space Force around again has been productive. What is clear is that in forming the ADF, priority must be given to the military infrastructure of space launches and to testing centers.

Although these things are not related to the immediate objectives of air and missile defenses, their operation is essential to the country's armed forces and not just to the ADF or the Strategic Missile Troops. One of the goals in reforming the Space Troops is to avoid the possible infringement of military space interests because of constantly changing subordination.

When will we celebrate again?

One question remains: when will we mark Aerospace Defense Day next time?

The Air Defense troops celebrate their professional holiday early in April, and the Space Missile Defense troops, on March 30. Both dates are connected with government resolutions on air and missile defense.

Since 2002, the Space Troops, which are to provide the core of the ADF, have been celebrating their day on October 4 - the anniversary of launching the first artificial satellite orbiting Earth, a symbol understood both in Russia and abroad. Incidentally, the October 4 holiday as Command and Measurement Complex Day has been celebrated since 1960.

Selecting a date for ADF day won't be a simple matter. Taking the path of least resistance, it could be either December 1 or some other date connected with the publication of an official document.

Or we could turn to March 4. On that day in 1961, for the first time in the world, a ballistic missile warhead was successfully intercepted over the Kazakh testing range Sary-Shagan. For the future Aerospace Defense Forces, such a date could be a natural and enduring symbol.