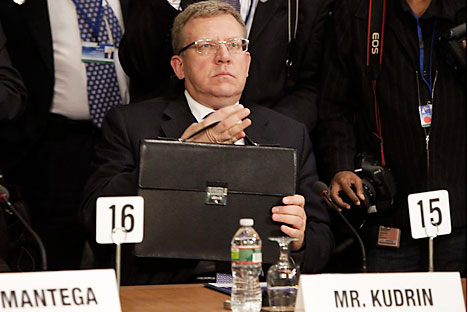 Kudrin left his post Sept. 26 after a public conflict with Medvedev. Source: Reuters

Kudrin is widely credited for policies that protected Russia from the worst of the financial crisis. Will they remain in place without him?

“I do not see myself in a new government. The matter is not only that no one has offered me the job. I feel that the disagreements I have will not allow me to join this government,” Kudrin said, citing a string of disagreements with Medvedev.

Kudrin is credited with stabilizing the Russian economy and creating the foundation for the strong economic growth of the last decade. The departure of “Mr. Prudence,” as Kudrin has been dubbed by some, raises two questions: Will he come back to government sometime soon? And, does his departure mean there will be a dramatic change in the cautious fiscal policy he has come to personify?

It was widely believed that after 11 years in the job, Kudrin wanted to step down, but would have stayed on if offered the position of prime minister. At the same time, his disagreements with Medvedev over plans to dramatically increase both military and social spending are well known.

“It is clear that Kudrin chose to leave because he did not want to be a prime-minister-in-waiting for the next decade as well. But he also left because he was in disagreement with Medvedev over his plans to spend $65 billion on the military in the next three years,” said Lilit Gevorgyan, a political analyst with IHS Global Insight.

The fear that many investors and businessmen expressed after Kudrin’s ouster is that the prudent economic policies he represented will be abandoned.

“On the policy side, in a sense Kudrin has not done as well as he used to because the pressure to spend has grown so much in recent years,” said Sergei Guriev, the dean of Russia’s New Economic School, pointing out that price of oil needed for the federal budget to break even has risen from $23 in 2007 to $118 today.

With western Europe teetering on the edge of a major financial crisis, the Russian economy is already feeling the pain caused by growing uncertainty; in the first week of October, the Russian stock market sold off returning valuation to the same levels as 2008 and capital flight has picked up dramatically.

“I don’t think this is the last we have seen of Kudrin,” said Nikolai Petrov, research fellow at the Moscow Carnegie Center. “I wouldn’t be surprised to see him back as prime minister next year.”

However, most Moscow-based analysts are confident that Kudrin’s successful policies will not be undone. Under a plan put in place by Kudrin, the Russian oil industry pays taxes equal to around 90 percent of crude export revenues over $28 per barrel; these proceeds are then placed in a stablization fund, which cushioned Russia from the worst of the financial carnage in 2008. At the same time, Kudrin used the windfall oil receipts to rapidly repay almost all of Russia’s national debt – under Kudrin, the debt to GDP ratio fell from 160 percent in 2000 to about 10 percent today, according to Renaissance Capital.

“Kudrin’s views weren’t popular. But then-President Putin backed him to the hilt,” said Liam Halligan, chief economist with Prosperity Capital Management. “Kudrin’s actions provided the stable macroeconomic platform that Russia so desperately needed. Kudrin’s policies will be broadly maintained because they have been successful and, in the aftermath of the 2008 crisis, were acknowledged as successful even by many of his former oil lobby detractors.”

Putin highlighted the closeness of his relationship with his former finance minister during a conference at the beginning of October, saying that despite Kudrin’s departure, he would remain part of Putin’s team, without specifying a role.

“"He is, no doubt, one of the best specialists not only in Russia, but also the world," Putin said heaping praise on Kudrin during his speech at the annual VTB Capital investment conference. "He is a friend of ours and a personal friend of mine."

Some analysts have actually been buoyed by the whole affair. Under Boris Yeltsin, Russian politics was all about who held raw power, but increasingly under Putin, political battles are fought over policy.

“The Kudrin-Medvedev spat also suggests Russia’s nascent democracy, while still very much a work in progress and far from perfect, is already capable of generating more meaningful public debate on fiscal policy in the run-up to crucial elections than many of the much older democracies in the Western world,” said Halligan.

For Kudrin's timeline as the Minister of Finance see next page

Alexei Kudrin becomes the Minister of Finance and launches a tax reform. Over the next few years, Kudrin introduces a flat 13 percent income tax, abolishes the 5 percent sales tax and cuts VAT from 20 percent to 18 percent.

Kudrin is named the best finance minister in Central and Eastern Europe by the magazine “Emerging Markets.” In giving him the honor, the magazine asserts that Kudrin’s conservative fiscal policy brought stability to the Russian economy.

Kudrin initiates the creation of the Stabilization Fund, which accumulates a portion of oil export revenues to save for future use. In spite of public pressure, Kudrin is adamant about refusing to use the Fund’s assets on domestic public spending.

Kudrin presents the first “non-oil-and-gas budget” in several years. It limits oil export revenues to 2.8 percent of GDP. That same year, Russia settles all its debts to the Paris Club.

The Stabilization Fund created by Kudrin allows Russia to avoid a collapse of the national currency at the peak of the global recession. Anatoly Chubais, himself a former finance minister and deputy prime minister, calls on all opponents of the Stabilization Fund to apologize to Kudrin: “I would suggest that you all stand in front of the Ministry of Finance with posters that read, ‘Forgive us, Kudrin!’”

“Euromoney” magazine names Alexei Kudrin Best Finance Minister of the Year. It also notes the role of the Stabilization Fund in overcoming the aftermath of the crisis. That same year, Kudrin receives his second top government decoration, the Order of Merit for the Fatherland, third class.

Kudrin continues to be sharply critical of the economic policy of the Russian government and President Medvedev. “Today I heard a call from Medvedev to live within our means. But over the last six months, it was Dmitry Medvedev himself who decided to increase military spending by 1.5 percent of the GDP.  This is a new challenge,” Kudrin told the St. Petersburg Economic Forum in June.

Kudrin leaves his post Sept. 26 after a public conflict with Medvedev