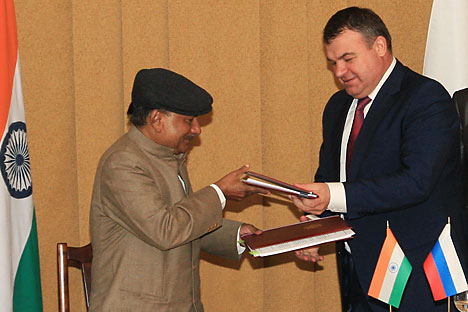 India and Russia managed to iron out some differences over delay in the supply of spares and put their defence ties on the even track during Defence Minister A.K. Antony’s visit to Russia in early October. The nuclear submarine Nerpa and the much-awaited INS Vikramaditya will be heading to India shortly.

Indian Defence Minister A.K. Antony’s recent visit to Russia has given a fresh impetus to the decades-old defence ties between the two countries. Antony struck all the right notes: he honoured the World War II veterans by laying wreath at the memorial and travelled to Zhukovsky in the Moscow region where he saw a demonstration of prototypes for the fifth-generation T-50-1 and T-50-2 fighter jets.

The highlight of his visit was delegation-level talks with his Russian counterpart Anatoly Serdyukov on a host of issues aimed at exploring fresh avenues for military cooperation and resolving some irritants, like the constant Indian complaint about the delay in the supply of spare parts. The two sides decided to strengthen interactions between their armed forces, defence industry enterprises and research agencies. They also signed a protocol for the development of bilateral relations and military and technical cooperation between the two countries.

High on Antony's agenda was the creation of a joint project of the Fifth Generation Fighter Aircraft (FGFA, which has the potential to become the largest joint defence programme between the two countries in the years to come. Antony expressed willingness to spend about $35 billion over 20 years to induct 250-300 FGFA's starting from 2020, of which 214 will enter the service first. The talks touched upon the forthcoming 10-year lease of the K-152 Nerpa multi-role nuclear submarine which will be transferred to the command of an Indian crew by December this year.

The two sides also discussed the plan to transfer the Vikramaditya aircraft carrier (known as Admiral Gorshkov in Russia) to the Indian Navy which, according to sources, will happen in 2012. The aircraft carrier is already more than 85 percent complete. The prospects for expanding bilateral military and technical cooperation were also discussed. “Our bilateral military-technical cooperation is now on the even track,” said Antony at the end of the talks.

In addition, Russian negotiators noted that Antony made it a point to bring up problems such as delays in the delivery schedule and failures on the Russian side to supply military equipment, weapons and spare parts on time. In particular, they talked about the latest postponement of the transfer of three Talwar class Type 1135.6 frigates to the Indian Navy.  This issue had triggered a spate of negative commentaries and reportage in the Indian media.

The delivery contract for three frigates (Teg, Tarkash and Trikand) worth $1.5 billion was signed in 2006. Under the agreement, Rosoboronexport should have delivered the first ship in April 2011, the second in October 2011, and the third in April 2012. Now, in accordance with the amended delivery schedule, India will receive the Teg in April 2012, the Tarkash in September 2012, and the Trikand in June 2013. But nobody can guarantee that these terms will not change.

All guarantees on the part of the Indian government have been made, they were even secured in a special agreement, but life is life - not once in the last twenty years has Russia managed to deliver a ship on time. This includes the first batch of Indian Talwar frigates, which was built in St Petersburg's Baltic Shipyard at the beginning of this century. However, when these ships were completed and inducted, they became the pride of the Indian Navy.

According to Serdyukov, issues regarding the resumption of joint training exercises for Indian and Russian sailors, as well as joint exercises for soldiers and special commando units were raised.

“The Navy's General Staff is preparing such exercises as we speak and is calculating the necessary forces and means,” said Serdyukov. “Once everything is ready, we will make an agreement with our Indian counterparts and announce the dates for these manoeuvres. They are extremely useful for us."

He also said that Russia apologised once again to its guests for failing to hold such training exercises this year when Indian ships arrived in Vladivostok and explained that the Russian Pacific Fleet was not ready for joint manoeuvres. The Russian defence minister told his Indian counterpart that this was not due to the irresponsible attitude of Russian Admirals, but rather to the political situation that had suddenly emerged in the Far East. The tsunami that struck Japan and the Fukushima nuclear power plant accident led to much humanitarian aid coming from neighbouring countries which prevented such manoeuvres from taking place, he explained.

Given the strained relationship between Moscow and Tokyo over the issue of the Kuril Islands, and the fight against the tsunami and explosions in Fukushima, it was extremely inappropriate to hold naval exercises in the area. "They might have misinterpreted that," Serdyukov told Antony.

In an important development, New Delhi offered Moscow the purchase of the jointly-produced BrahMos supersonic anti-ship cruise missiles that the Indian army is actively preparing for the Coast Guard, surface ships and submarines. It is even planning to modify the missile for use on the SU-30MKI multi-role fighter jet.

The purchases, Indian experts say, are aimed at increasing the missile’s export potential, which would bring significant financial benefit to both countries in the world arms market.

Russian specialists thanked their colleagues politely for the proposal and reminded them that we already have such missiles - the Oniks, on which the BrahMos is based. As for the modernisation of the SU-30MKI fighters for use with BrahMos missiles, the Sukhoi Company is ready to carry out such research and development activities, but it requires several aircraft from the Indian Air Force.

According to sources, the members of the Indian delegation promised to send the jets to the Gromov Flight Research Institute in Zhukovsky shortly, where the planned research and development will begin. To be sure, we should not expect results any time soon - the most optimistic scenarios being no sooner than 2013-2014. “If a job is worth doing, it is worth doing well,” says a Russian defence ministry official.

The Indian side probably will not agree to join the Russian GLONASS system immediately. New Delhi is actively using GPS, the American global navigation system. But it will help to use GLONASS as a backup system for the Army and the Navy, as well as for civilian organisations. According to some reports, Moscow is seducing New Delhi with the GLONASS’ ability to direct cruise missiles with great precision. The idea is a good one, but the question is how much it will cost. This is not just about the purchase or manufacturing of dual navigational systems (Russian and American) in Indian production facilities. We would have to build an extensive network of ground stations in India to ensure a sustainable reception from Russian satellites. And in the end, New Delhi will decide whether it suits its needs or not.

I think both sides have enough wisdom, hope and patience. In the end, the Russian-Indian military and technical cooperation is not designed for one day, nor is it for one month, or one year. There are many decades ahead of working together for the benefit of the security of both countries.