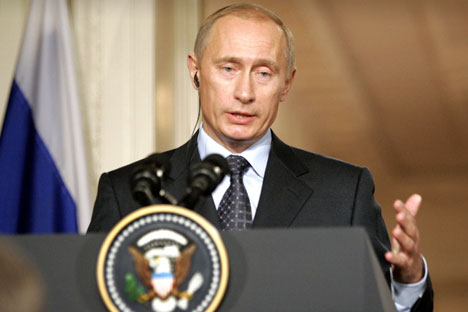 What will Vladimir Putin's return to the presidency mean for U.S.-Russia relations? Source: AP

The American political establishment should not be naive about how the return of President Putin will affect U.S.-Russian relations.

A consensus is emerging among Russia-watchers that Vladimir Putin’s return to the Russian presidency will have little impact on the country’s foreign policy and, in particular, on U.S.-Russia relations.  Andrew Kuchins, of the Center for Strategic and International Studies in Washington, D.C., has eloquently summarized this sentiment:

“The possible election of Putin as the president of Russia will not signify a fundamental change in the direction of U.S.-Russia relations.  The main reason for this is the fact that no major decisions on foreign or domestic policy during the period of Dmitry Medvedev’s presidency have been made without implicit or explicit support from Mr. Putin.”

Not everyone is subscribing to this relaxing opinion.  For example, the American Enterprise Institute’s Leon Aron, in an article titled “Watch out for Putin, and Russia,” points to what he calls Putin’s “profound mistrust of the West” and warns “the United States must prepare for…destabilizing developments.”  Aron predicts that no progress will be made on European missile defense and expects that Russia will be less cooperative on Iran.

And, naturally, there are always folks trying to find a common ground between optimists and pessimists.  Thus, Mary Beth Sheridan of the “Washington Post” attempted to sound neutral:

“Now, [U.S. President] Obama is going to have to get used to a new partner – Vladimir Putin.”

Is he really?  Remember, if Putin is elected, he will be sworn as the next president of Russia in May 2012.  At this time, President Obama will be in the middle of a tough re-election campaign; the last thing on his to-do list will be improving a frosty relationship with his newly inaugurated Russian “partner.”  Not to mention the fact that any attempt to cozy up with Putin will be immediately interpreted by Obama’s Republican opponents as Putin “appeasement.”

Obama and Putin met once, in July 2009, during Obama’s visit to Russia, and this was a tough one-on-one, according to the people present.  Obama can’t blame anyone but himself: Shortly before the meeting, he described Putin as having “one foot in the old ways of doing business and one foot in the new.”  This comment was apparently intended to signal the administration’s support for President Medvedev’s modernization agenda.  In hindsight, however, it is clear that Obama’s whole approach – and, in particular, his jab at Putin – was misguided.

It appears unlikely that this mistake can be corrected quickly.  True, Obama and Putin will have opportunities to meet face-to-face in 2012: once at the G8/NATO summit in Chicago in May and then at the APEC meeting in Vladivostok, Russia in November.  It is, however, highly doubtful that these bilateral mini-summits will produce anything more substantial than mandatory photo-ops.

And then, in November, the presidential election in the United States will take place. Obama has about a 50-50 chance of losing it, and should this happen, the agenda and the dynamics of the Washington-Moscow dialogue for the foreseeable future will be defined not by Putin, but by the next U.S. president, a Republican.  Incidentally, Mitt Romney, currently the leading Republican presidential candidate — and, therefore, the likeliest “new partner” for Putin  – remarked recently that the “reset” in U.S.-Russia relations “has to end.”

Of course, Obama may still get re-elected, but his ability to conduct the Russia policy he wants will be further limited by the expected loss of the Democratic majority in the Senate, something that the apologists of the “nothing-is-going-to change” approach seem to overlook.  It is no secret that Obama invested heavily in his relationship with Medvedev – on the assumption that supporting Medvedev was a way to signal U.S. support for reforms in Russia and, of course, on the assumption that supporting Medvedev will improve his chances to be elected for the second term.  Now, having been proven wrong, Obama will feel utterly uncomfortable in his communications with Putin.  Making things even worse, Senate Republicans – most likely, in majority – will obstruct his every move vis-à-vis Russia, however benign.

In 2008, Henry Kissinger perceptively observed that when Putin was president, “Russian policy … [was] … driven in a quest for a reliable strategic partner, with America being the preferred choice.”  Regardless of whether Putin “trusts” or “mistrusts” the West, he has all the reasons to believe that his offer of strategic partnership to the United States had been rejected by anti-Russian policies of the Bush administration.  What has Putin heard so far from the other side of the Atlantic that persuaded him that the U.S. now considers him a “new partner?”  That he is not supposed to change Russia’s U.S. policy?

Naturally, any speculations on the direction of Russian foreign policy during Putin’s third and, possibly, fourth presidential term are premature, yet the very notion that nothing will change because Medvedev’s past initiatives were implicitly or explicitly supported by Putin – which is impossible to know for sure – appears dangerously naïve.  After all, Putin’s acquiescing to Medvedev’s decisions – or choosing not to veto them – doesn’t prove his endorsement of these decisions, much less a willingness to pursue them.  If American presidents regularly throw away foreign policy initiatives of their predecessors, why should Putin not feel free to do the same?