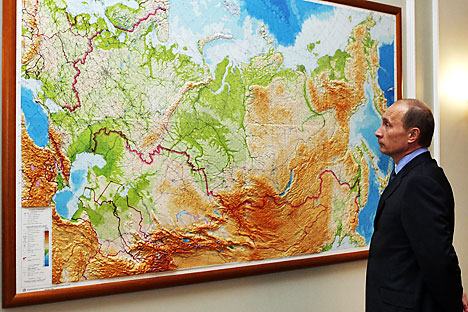 Vladimir Putin has proposed a new structure for integrating the former Soviet space, but so far his proposal seems like little more than a campaign promise. Source: Reuters

The former Soviet republics remained inextricably linked, but more integration may not be what they need.

This year marks the 20th anniversary of the fall of the Soviet Union, and it has become clear over these past 20 years that the former Soviet republics, regardless of their attitudes towards their common past and each other, are linked by thousands of different threads that have proven difficult to sever. And it has become clear that independence, in and of itself, does not guarantee a new state economic prosperity, adequate domestic policies, or successful integration into global structures.

But even given these ties between post-Soviet states and the problems of independence, is it wise to talk about creating structures that will unify at least some of the former Soviet republics? Russian Prime Minister Vladimir Putin seems to think so. Just after Putin announced his intentions to return to the presidency next spring, he published an article in the newspaper “Izvestia” entited”A New Integration Project for Eurasia – A Future That is Born Today.”

This text isn’t just about Putin’s presidential prospects. Moscow holds geopolitical and economic leadership in the territory of the former Soviet space today, but this leadership is based on an historic past, and its continuation cannot be automatically guaranteed. In order to maintain Russian hegemony, new integration processes are needed.

Make no mistake – Putin is not calling for a return to the Soviet Union. In the article, the prime minister clearly and unequivocally states that his proposed model of economic integration has nothing to do with the Soviet past. Putin writes: “It would be naïve to try to revive or emulate something that has been consigned to history, but these times call for close integration based on new values and a new political and economic foundation.”

In fact, Putin draws more heavily from the example of European integration than the Soviet one. The prime minister emphasizes heavily the need for a close examination of the experience of a united Europe, and he points out that the proposed Common Economic Space will be based on the principle of open borders between its members.

Putin also discusses the Commonwealth of Independent States, and many of his assessments of it are spot-on. Looking back, it’s clear that the CIS helped solve problems, such as dividing up the common Soviet armed forces and establishing national military bodies; recognizing borders between newly independent states; and implementing a coordinated immigration policy, which ensured visa-free travel.

However, many problems, such as trade policy, were left unanswered, which led to stagnation in the CIS’s development. Additionally, the member countries prioritized bilateral relations, which undermined the organization’s effectiveness.

In general, Putin’s article overlooks the changes that have occurred in the post-Soviet space in the last 20 years. A common history cannot serve as a unifying factor over the long term. The post-Soviet space is now more integrated into the global economy and politics than it was in the early 1990s. Important global players such as the United States, the EU, China, Japan, Turkey, Iran, and multinational corporations have all staked their claims in the region. And the region is generally more fragmented. Even within the customs union that exists between Russia, Kazakhstan and Belarus, which went into effect in July 2010, there are disagreements, although these are more political than economic. Moscow and Minsk disagree about Russia’s policy in the South Caucasus, and Kazakhstan has long been a strategic economic partner of Georgia. Nevertheless, it is important to note that economic cooperation is just one aspect of integration. It’s unlikely that the European Coal and Steel Community would have become the European Union of today had the Europeans not raised and resolved complicated political issues.

Despite its aspirations, Putin’s text is still essentially a campaign manifesto, and it indicates that the Russian leadership may not fully understand the strategic implications of integration beyond the context of elections. The article is heavy on optimistic slogans and goals, but short on mechanisms and resources for achieving them. And the longer Putin goes without proposing a detailed rationale for his program, the more the West will see it as threat.

In the 20 years since the collapse of the Soviet Union, the West has viewed any attempts by Moscow to bolster its activities in the post-Soviet space with caution. This explains both the hard-line response from Washington and its NATO allies towards recognizing the independence of Abkhazia and South Ossetia, which is the first case of redrawing borders in the region since 1991; and their reluctance to work with the CSTO, which is perceived as a tool of Russian domination rather than as an integration structure. Important expert and political circles have developed a tradition of viewing Russia’s strengthening presence in Eurasia as a challenge, and as a bid to restore Soviet hegemony.

A new integrated structure in Eurasia is not in itself a bad idea. It could support and encourage their development. But such a structure requires not only optimistic predictions, but also a serious reflection on the mistakes of the past and how to properly address them

Sergei Markedonov is a visiting fellow at the Center for Strategic and International Studies in Washington, DC