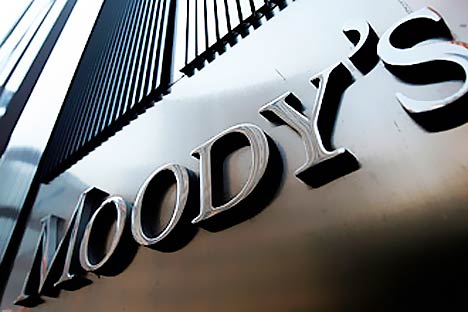 The next wave of the financial crisis could be more dangerous for Russian banks than the 2008 market collapse, Moody’s said on Tuesday. The ratings agency also warned about a possible downgrading of the ratings because of a dip in share prices and default on credit repayments.

Moody’s warns of a new crisis

“If a scenario similar to the 2008 crisis materializes, in our ‘adverse scenario,’ the banks could incur heavy losses on securities and loan portfolios and depressed earnings would likely drive the banking system-wide statutory capital adequacy ratio down to below 10 percent, from 16.7 percent, reported as of mid-2011,” explains Yaroslav Sovgyra, a Moody's associate managing director.

If the prognosis comes true, the effect of the new banking crisis will be more dramatic than that of 2008. In January, 2009, the capital adequacy ratio (ratio of primary capital to its assets [loans and investments], used as a measure of its financial strength and stability) was 13.6 percent.

The level went down from last year, but is still high, head of TKB Kapital Maria Kalvarskaya told Gazeta.ru, as the central bank demands that it exceeds 10 percent.

The standard sources for capital for banks are profits, shareholders’ money or new investments.

Moody’s calculations indicate that a deeper crisis could leave banks with at least 2.4 trillion rubles losses.

A crisis would lead to a diminishing demand and a fall in oil prices, leading to a tumble in Russian exports followed by an economic recession. Moody’s stress that the growing uncertainty and flight of investors are causing economic growth to slow down, as well as markets and the ruble to fall.

Moody’s however, says the government is prepared this time.

“The consequent effect on liquidity would be profound, requiring the Central Bank’s assistance to stabilize potential market disruption. However, in our view, the Russian monetary authorities are better prepared than in September 2008, which would likely help to contain potential negative effects for the sector,” adds Sovgyra.

Earlier, the head of the Central Bank, Sergei Ignatyev, did not eliminate the possibility of a liquidity deficit, but said the bank was ready to pour up to a trillion rubles into the system.

Russian bankers also see no cause for panic.

“After the crisis we toughened credit rules,” Andrei Shalimov, chairman of Vozrozhdeniye bank, told Gazeta.ru, adding that the bank’s rating was not lowered in 2008. “I do not think that banks like Vozrozhdeniye should be wary of rating downgrades. Maybe some banks will have problems, but there will be no [mass] bankruptcies as in 2008. At the moment there are no signs of a worsening liquidity situation.”