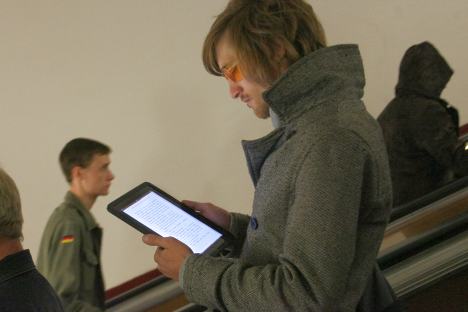 Internet access in the Metro could encourage commuters to take it. Source: ITAR-TASS

Covering the city with free Internet access would bring Moscow in line with other technologically savvy world capitals, such as Taipei and London.

In mid-September, Moscow Mayor Sergei Sobyanin officially announced a long-heralded project to wire the entire Moscow Metro system with free Wi-Fi, a plan that could bring the Russian capital in line with some of the world’s most technologically savvy cities.

The project, which would allow underground commuters to surf for free from the beginning of 2012, follows on the heels of a decision this summer to provide free Wi-Fi across Moscow’s Gorky Park.

“Currently there is free Wi-Fi coverage in a relatively large number of public places in Moscow, but it is still not the main tool used for accessing the Internet,” said Konstantin Chernyshev, a telecommunications analyst at Uralsib investment bank. “Most Moscow Internet users are subscribers of fixed-line services.”

As the Internet becomes more and more essential for day-to-day life, free Wi-Fi is turning into a natural development in the infrastructure plans of most big cities. Sobyanin said he hopes to introduce free Wi-Fi on all forms of public transport in Moscow in the coming years. A six-month-long pilot project was launched this year to provide free Wi-Fi on a commuter bus linking the city with satellite town of Zelenograd. If the service proves popular enough, it will be launched on transport systems across the city.

Analysts say the project may encourage people to take public transport, where they can write emails on their way to the office, instead of driving on the city’s over-congested roads. The source of funding for the Metro project is still not clear, although Chernyshev said it may be carried out in partnership with one of the “big three” Moscow cell phone providers — MTS, VimpelCom and MegaFon — which are all contributing to the bus Wi-Fi project and already have substantial fixed-line Internet services in the Metro.

Although nowhere near as ambitious, the Metro proposal is reminiscent of a scheme launched by Golden Telecom in 2006, which aimed to turn the entire city into a free Wi-Fi zone. The project fizzled out after the company was taken over by VimpelCom in 2008 and the development of new technologies such as 3G networks took precedence.

Analysts, however, say Moscow may now be moving back in the direction of city-wide Wi-Fi connection. Expansive city Wi-Fi zones have been successfully set up in many U.S. cities, and the Finnish town of Oulu has managed to cover its entire city space in partnership with local universities. Taipei, Taiwan, is set to expand its free Wi-Fi network to the entire city by October, and London Mayor Boris Johnson has pledged to provide city-wide Wi-Fi in time for the 2012 Olympics.

Moscow already has a relatively high number of free Wi-Fi hotspots, provided by cafes, universities and offices, but so far there has not been much discussion of linking up the space in between.

Viktor Tsygankov, a senior analyst at the Moscow office of the global I.T. analysis firm International Data Corporation, said the idea was feasible, but would require heavy investment. “Moscow is around 40 kilometers (25 miles) in diameter, so it would be quite pricey to cover the whole city with free Wi-Fi,” said Tsygankov. “The high population is another factor. If just 20 percent of people were using Wi-Fi in the city simultaneously, that would constitute extremely high traffic.”