Spread your wings for a long-distance flight 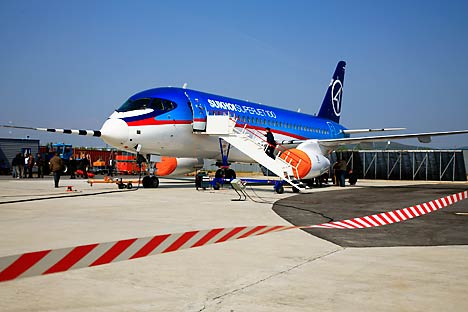 The deal was signed within the framework of International Aviation & Space Salon MAKS-2011.

Sukhoi Civil Aircraft announced the beginning of Sukhoi Business Jet development on the basis of the regional jet Sukhoi Superjet 100 this June at the Paris Air Show at Le Bourget.

According to Aviotech, the decision to buy SBJ airliners was made thanks to their excellent economic and technical characteristics.

There are three SBJ configurations: VIP, Corporate and Government. Aviotech and Sukhoi Civil Aircraft signed an agreement on the supplies of VIP Sukhoi Business Jet airliners.

Due to installing additional fuel tanks in the baggage-cargo compartment, the range of this jet is going to make almost 8000 kilometers, which will allow for long distance flights.

The companies intend to begin discussing the technical design of the airliners to be supplied.