Turkey and the future 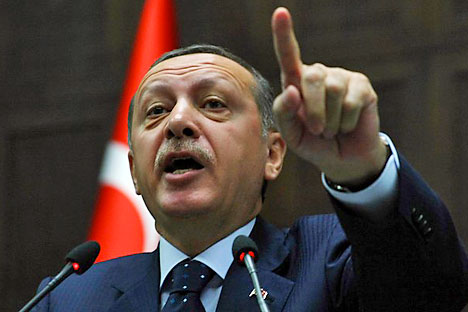 Prime Minister Recep Tayyip Erdogan could be a rising star in the Middle East, or he could destabilize the whole region.

There is hardly a day when Recep Tayyip Erdogan, Turkey’s Islamist prime minister, is not doing something that grabs the attention of the media worldwide. He preaches democracy to the Egyptians, threatens Israel with naval action, promises the Palestinians to recognize their as-yet-non-existent state and declares publicly that he is no longer on speaking terms with Syria’s not-so-strong-man Bashar al-Assad. In a recent interview to “Time” magazine, the Turkish prime minister mentioned his country’s long-standing official bid to join the European Union only in passing. He hinted that by the time the Europeans are ready to accept Turkey as one of their own, it might well become a much less accommodating and more demanding partner.

And why not? Erdogan and his team possess a vision for Turkey that, although still a work in progress, is much more coherent, inspired and whole than anything the current EU leaders, uniform, dull and indecisive as one, could ever suggest to their own people. This is a prospect of a country that sincerely espouses Islam and is at the same time comfortable with other faiths, opinions and mores. Erdogan’s agenda is values-based – and this makes it infinitely more interesting and exciting than anything the EU has to offer, even if you disagree with the values themselves. In all earnestness, if you were a young Turk (no pun intended), which of the two “projects” for your country would you rather fall for: spreading influence, political and economic, in the Mediterranean, and making its own decisions about the future? Or joining a large club of disparate nations trying in vain to bail out a state with the population the size of Istanbul, and at the same time feeding a sprawling Brussels bureaucracy aspiring to dictate the shape of eggs to the farmers of Denmark and regulate alcohol sales to the indigenous peoples of Finnish Lapland? The answer is somewhat obvious.

That Turkey’s strict secularist system, guaranteed and upheld by the military was out of step with the changing times, was clear even before the former mayor of Istanbul burst onto the national political scene in the 1990s. But it is also obvious that the old secular, Ataturk-worshipping elite missed this point. And now Erdogan’s “Justice and Development” has ceased the momentum. In the words of a friend of mine, a professor of political science at one of Turkey’s leading private universities, “the prime minister is using democratic slogans to change the system so as to enshrine the Islamists’ leading position in Turkish politics for years, if not decades to come.” Erdogan conducts an unrelenting witch-hunt against the military – and gets applause from the EU for removing the “peaked caps” from politics. Unexciting and sometimes nasty, the generals kept the radicals of all hues out of politics. Will they be still kept on the fringes? There is a legitimate doubt about this. Erdogan calls for direct elections of the president, preparing to slip into the head of state chair in order to continue his political career well into the future. But what should worry everyone most is his persecution of journalists (several dozen are in jail, frequently on flimsy or obviously constructed charges). He also stuffs the judiciary with the “Justice and Development” party sympathisers. All this makes Erdogan’s protestations of his commitment to democracy not very convincing.

His foreign policy looks erratic and prone to sloganeering at best, reckless at worst. Looking at the footage of his triumphant tour of the Middle East I could not help but compare it to the documentary reels of Gamal Abdel Nasser working the crowds into frenzy by his fiery appeals to “drive Israel into the sea.” Of course, Erdogan says no such thing. He knows that there are red lines that cannot be crossed if he wants to be taken seriously by the West.

Still the Turkish prime minister’s taste for populism and popular adulation is a cause for worry. At the same time, one has to give it to him – he knows where to stop. Erdogan went back on his own promise to visit the Hamas-run Gaza strip in solidarity with the Palestinians, although the Egyptian authorities were ready to open the border for him. He recently duly deployed U.S. radars on Turkish soil in compliance with NATO obligations. So the jury on the maverick Turkish leader’s future is still out. He might well become a great reformer who would influence not only his native country but also Muslim societies around the world. However, he may also turn out to be a power-hungry politician who will ruin Turkish democracy and destabilize the Mediterranean.