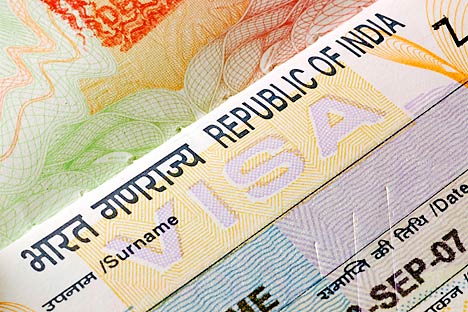 The nod by the Federation Council, the upper house of Russian Parliament, came days after the lower house State Duma overwhelmingly approved the inter-governmental agreement on simplification of requirements for mutual travels of certain categories of citizens.

Inked in Delhi on December 21, 2010, the pact provides for simplified visa process for members of the official delegations, businessmen, representatives of the industry and commerce chambers, persons involved in scientific, cultural and creative professions, sister city exchanges, school kids, other students, their group leaders, research scholars and tourists, the Federation Council said in a release.

The bill will now go for signing into law by President Dmitry Medvedev.

The individual citizens and organisations will not any more need an invitation or a tourist voucher to travel to Russia or India and will be able to directly apply for visas.

For the first time since the Soviet collapse, the two sides are also considering the issuance of one-year and five -year multi-entry visas allowing their citizens holding valid national passports to stay on the territory of the other country for up to 90 days within a period of 180 days from their first entry.

This limit is explained by the international practice that after staying in a foreign country for more than 180 days, a person becomes the tax resident of that country.

The agreement also provides for easier process for returning to their respective country in case of loss of travel documents and 'gratis' (free) extension of their visas in case of need.

Many Russians jailed in India for overstaying due to loss of their passports or expiry of visa will benefit from the new law along with an unspecified number of illegal Indian immigrants, duped by agents.

Earlier in June, India took a lead in resolving the vexed visa issue by liberalising its rules for the Russian citizens visiting India on business and tourism.

"To further encourage business contacts and promote tourism between India and Russia we are now issuing multi-entry business visas valid for one year against six months single or double entry in the past and tourist visas valid for six months with multiple entries," Indian Ambassador Ajai Malhotra said in a statement.

The Indian diplomatic missions in Moscow, St Petersburg and Vladivostok have streamlined issuance of business and tourist visas within three working days against 14 days in the past.

According to Ambassador Malhotra, the Indian missions in Russia had issued about 110,000 visas to Russian citizens during 2010.

"I expect this number to increase by about 25 per cent this year", Malhotra said.

Tourist flow from Russia to India has picked up in recent years, with Goa, New Delhi-Agra-Jaipur Golden Triangle, Mumbai and Kullu-Manali emerging as major attractions.