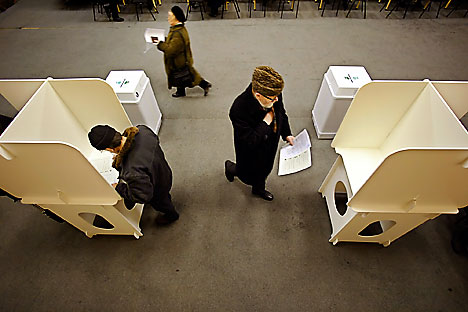 Russia's electronic voting system has a better track record than in many countries considered more developed.

In 1994, when the Russian budget was more or less equivalent to that of New York City, the state decided to begin development of the Automated State Election System (SAS). Prior to the development of SAS, Russian electoral rolls were printed on typewriters and ballot papers were hand-counted. In the 1993 elections, it took election officials 12 days to count the votes. SAS, which took about a year to develop and launch, was built on a foundation of Soviet technological innovations, but some of the world’s leading IT companies, including HP, Oracle, and Cisco Systems, also contributed.

"With the creation of the Elections SAS, we became pioneers. And to this day, not a single country in the world has a system like ours," said Mikhail Popov, head of the Federal Center of Information Technologies under the Central Election Commission of the Russian Federation, in a 2009 interview with Rossiyskaya Gazeta. It’s possible that he is over-praising his creation. But the SAS has served more than 20,000 election campaigns at various levels without significant technological failures.

In 2009, Russian President Dmitry Medvedev proposed an upgrade to the system. According to Medvedev, the upgrade was necessary to enhance the transparency of the electoral process and strengthen public oversight. Last year, a state program was launched specifically to introduce electronic vote counting, establish a secure network for data transfer and storage, and construct infrastructure for remote voting via mobile phone for those who cannot make it to polling stations. This is particularly important in Russia, where in some regions the closest inhabited locations might be thousands of miles apart.

Many polling stations are now equipped with webcams, so in theory, voters can watch the counting of votes without leaving their computers. But the effectiveness of this measure is limited by Internet penetration rates: According to Yandex, Russia’s most popular search engine, just 40 percent of the voting-age population has access to the web.

One of the major technical innovations that will be in operation for December’s State Duma elections is an optical scan voting system. Voters can bring their ballots to the scanner and a Russia-wide data network will record all the information from it. Not only does this increase processing speed, but more importantly, it prevents possible fraud at polling stations. If violations occur, there would be documentary evidence to prove them. In previous elections, "ballot stuffing" has been observed, although not a single fraud case has ever reached the courts.

In many ways, the Russian system is more sophisticated than its foreign counterparts. The American system, developed by Diebold, consists of sensory terminals, also known as e-voting machines. These are tablets that run on Windows and are connected to the Internet by ordinary, unprotected wires. The system has been around for about 10 years, during which time a number of scandals have occurred, most notably in 2002 when the developer accidentally posted the system's codes and scripts in open access.

The European system, called E-Poll, is technically perfect, but it is being implemented slowly. In France, for example, it is still a novelty. The matter is complicated by the fact that municipalities have been asked to choose between several types of machines that also have to be purchased using local funds, although subsidies are available. The French authorities have acknowledged that they are still 10 years away from a fully electronic system. Meanwhile, tests have been suspended in Spain and Belgium, while in the UK, electronic systems are being developed separately for each region of the country.

Some of Russia’s fellow BRICS members have had success with automated voting, but even here there are challenges. India is a pioneer in the automation of elections. The country tested prototypes as early as 1989. However, the huge population of the country combine with the poor development of the Internet in rural areas and a shortage of computer systems have made progress slow. This is also true of Brazil, which is also considered a leader among developing economies in the creation of automated voting systems. Where it is implemented, the Brazilian system allows for approximate results within one hour. Russia’s Central Election Commission secretary Nikolai Konkin even visited Brazil in 2010 to study the Brazilian system. But at a recent seminar in Russia, representatives of the Electoral Commission of Brazil noted that they can learn a lot from the Russian experience, most importantly the challenges of using an automated system across a large country that contains many sparsely populated areas.