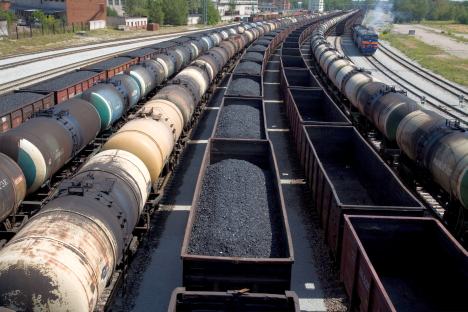 The extractive industries have kept Russia’s economy in the black, but raw materials can only do so much in the long term. Source: LAIF/VOSTOCK-PHOTO

Russia’s extractive industries have almost returned to precrisis levels, but a sharp drop in investment has left the country at the mercy of the global economy.

Three years after the financial crisis in Russia began, the country’s G.D.P. is still short of precrisis levels. But results from the first half of 2011 show that there is not far to go. G.D.P. grew by 4.1 percent in the first quarter of the year and by 3.4 percent in the second. Other macroeconomic indicators also seem encouraging, which has prompted policymakers to declare that the country’s recovery is complete — or that it will be by early 2012. In theory, the situation in Russia indeed seems better than in other parts of the world. And yet to declare the economic crisis in Russia over is premature: T he economy remains dependent on raw materials, and foreign investment has been slow to return. According to statistics, industrial production in Russia from January to July 2011 is only a fraction of a percent smaller than it was before the crisis. Raw materials extraction has grown by 4 percent, and oil extraction by 4.2 percent compared to precrisis levels. The situation in the mining industry has led to positive general industrial production indicators, reported the Center for Macroeconomic Analysis and Short-Term Forecasting (TsMAKP). Russian industry owes its resurgence to the extractive industries, which have returned to precrisis levels, and investments, which have surpassed previous values, as well as decent profitability, only slightly less than before the crisis.

The manufacturing industry is behind by 10 percent compared with 2008 levels, although there are exceptions. Consumer production, hydrocarbon processing and the automotive industry are relatively healthy — some because they are focused on the local market, others because of increased production, and yet others thanks to government support programs. Among the manufacturing industries that are lagging are the production of equipment, building materials and metallurgy.Investing in the futureIndustries that are yet to return to precrisis levels “are basically the investment segment,” said Vladimir Salnikov, deputy general director of TsMAKP. “The dynamics of fixed capital investment, an important indicator that determines the quality and dynamics of future development, has failed.” According to TsMAKP estimates, fixed capital investment in the manufacturing industries is 7.5 percent below 2008 levels, profitability is down one quarter, and solvency is down by one-third. The inflow of investment into the Russian economy overall has dropped significantly. Despite a nominal increase (from $102 billion in the first half of 2008 to $112 billion in the first half of 2011), there has been a decline of almost 14 percent in terms of G.D.P.. “This reversal has become rather fixed,” said Salnikov. “It is unclear how long it will be before we see investment growth again.” Now, Russia, like many other countries, has become “a hostage to the situation in Europe and the United States,” said Salnikov. With growing economic problems in these regions and China’s economic slowdown — the growth forecast for China’s G.D.P. was recently lowered, although it still remains high, at 9.3 percent — a correction in commodity prices is not out of the question. This will hurt the Russian economy, which emerged from the 2008 crisis with an even greater dependence on hydrocarbon prices. “We have absolutely no control of such potential problems as they can come from outside, from the global market,” said Salnikov. Nevertheless, he remains optimistic: “Potential growth in developed Western countries is much less than in developing countries. Investors will eventually go where there is the potential. In this sense, Russia ultimately is in a good position. In a deep world crisis, all we want is some assurance of stability in these developing countries so that investors can understand that their investment is protected.”