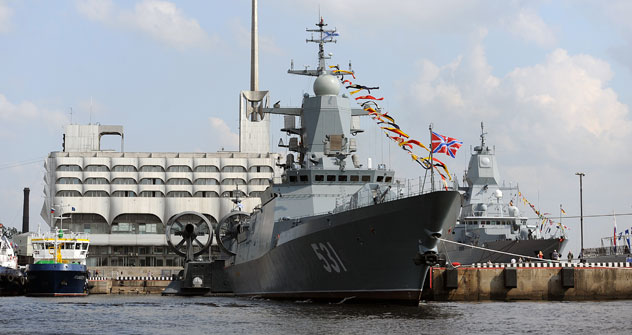 The Soobrazitelny is the second Project 20380 or Steregushchy class corvette. Source: TASS

St. Petersburg's Severnaya Verf shipyard will deliver a new stealth corvette to the Russian Navy at an official ceremony on Friday.

The Soobrazitelny is the second Project 20380 or Steregushchy class corvette designed by the Almaz Central Marine Design Bureau.

“The corvette features innovative solutions regarding hull design, armament, communications and electronics,” the shipyard said in a statement.

The first Project 20380 corvette, the Steregushchy, was put into service with Russia's Baltic Fleet in October 2008, and two other ships of the same series, the Boyky and the Stoyky, are under construction.

The Steregushchy class corvette can be deployed to destroy enemy surface ships, submarines and aircraft, and to provide artillery support for beach landings. Advanced stealth technology is used to reduce the ship's secondary radar field, as well as its acoustic, infrared, magnetic and visual signatures.

Russia plans to have up to 30 vessels of this class to ensure the protection of its coastal waters, as well as its oil and gas transportation routes, especially in the Black and the Baltic seas.