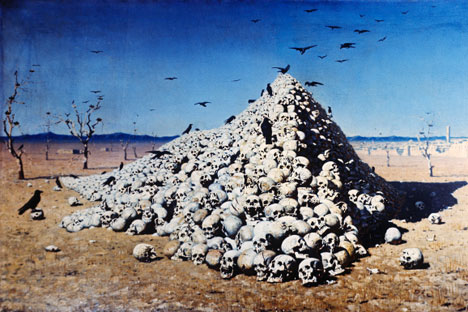 'The Apotheosis of War', Source: RIAN

Vasily Vereshchagin depicted war atrocities in his paintings for many years, and even his own life tragically ended during a Russo-Japanese war.

When it comes to Russian painters who had a fascination for India, the first name that comes to most people’s minds is Nicholas Roerich, an artist and philosopher who left an indelible mark in both India and Russia with his paintings and books. There was, however, another great Russian artist and traveller, who made a valuable contribution to India by chronicling the country under British Rule: Vasily Vasilevich Vereshchagin.

Born into an aristocratic family in Cherepovets (in what is now the Vologda Region) in 1842, Vereshchagin graduated from the Naval Cadet Corps in St Petersburg but he had a strong inclination towards the fine arts.  He then enrolled in the Imperial Academy of Arts (now the St Petersburg Academy of Arts), a school that promoted the neo-classical style and technique. However, a disdain for fixed methods and techniques put him out of favour with many of his teachers and he even denounced methods taught to him in Paris by Jean-Leon Gerome.

The Russian artist’s international legacy is that of a military painter. He had his first taste of war at the age of 26 when he accompanied the Russian Army, under General Konstantin Kaufman on an expedition to modern day Uzbekistan. He was decorated with the Cross of St George for bravery shown during the siege of Samarkand.  His future paintings were greatly influenced by what he witnessed during the wars. In what was one of his most graphic paintings, ‘The Apotheosis of War,’ hundreds of skulls are put on top of another on a hill. Although, Vereshchagin was involved in military campaigns, his words of dedication after painting the ‘Apotheosis’ smack of irony and almost sound like a mark of protest against war: “to all conquerors, past, present and to come.”

It was in 1876 that the Russian painter first came to India, a country that just two decades earlier fought a war of independence against Czarist Russia’s rivals, the British Empire. He painted several illustrations of the British Rule of India, the most famous of those being “The State Procession of the Prince of Wales into Jaipur.” This enormous painting, which is now inside Calcutta’s Iconic Victoria Memorial, is the third largest painting in the world. While one may be mistaken into believing that Vereshchagin glorified the British Raj, the painting is more like a modern-day photograph documenting an event. In fact, Vereshchagin’s illustrations of the Raj demonstrated a strong dislike for British rule in India.

The British looked at Vereshchagin with suspicion and were very often critical of his work. The painter specialised in illustrations from several wars, including the Russo-Turkish War of 1877-88. His painting of the 1857 Indian War of Independence titled ‘Blowing from Guns in British India,’ drew flak from the British. The painting showed Indian soldiers getting executed by being tied to gun barrels but the uniforms worn by the British officers suggested that these acts were being carried out in the 1880s. The Russian painter insisted that the British were likely to carry out similar executions if there was another war of independence.

Vereshchagin was one of the first painters to depict the cultural continuity from Central Asia into northern India. The paintings show the similarities in architectural styles in mausoleums and monuments from Samarkand and Bukhara to those around Agra. This month, a Sotheby’s auction managed to sell Vereshchagin’s 1876 oil on canvas painting of the Taj Mahal for $3.7 million to an anonymous buyer. Looking at the masterpiece, it’s hard to believe that there was a time in India, when the Yamuna River was as clean and clear as portrayed in the painting.  One can also imagine how unpolluted Agra was in the 19th century, when admiring the blue skies in Vereshchagin’s illustration of the Moti Masjid (Pearl Mosque) in the Agra Fort.

The Russian painter saw many places in India during his two trips. It remains a mystery where the “Adelnur” from his ‘Brahman Temple from Adelnur’ is. Another painting titled “Evening at the Lake, Raj Nagar” shows a marble embankment with bas reliefs in Udaipur at a time when the town was nowhere close to being the tourist magnet that it is in the 21st century. Vereshchagin also painted several portraits of Indians covering a diverse range of people including nomadic Laddakhis, a Muslim fakir, a bania (trader) in Bombay and some people that dressed well enough to look like members of the aristocracy.

Like Nicholas Roerich, Vereshchagin was enamoured by the beauty of the Himalayas and the Tibetan plateau. This writer once saw a pair of phenomenal paintings by the military artist at Moscow’s Tretyakov Gallery titled ‘Glacier on the Road from Kashmir to Laddakh’ and ‘Snows of the Himalayas.’  Vereshchagin even managed to visit Sikkim, when it was an isolated and independent kingdom.  Looking at his range of paintings, it’s obvious that the Russian painter and traveller saw more of India in the 19th century than many Indians would in the 21st century.

Despite Vereshchagin’s beautiful illustrations of India, his legacy remains that of a military artist, who witnessed and documented wars. Besides ‘Apotheosis’ and ‘Blowing from Guns of British India,’ the Russian painter drew criticism for his painting of the execution of members of the Nihilist movement in St Petersburg. Vereshchagin moved to the Russian Far East and witnessed both the Russo-Japanese War and Russia’s advances into Manchuria.

Despite surviving a variety of wars that stretched from the Russo-Turkish War to the American campaign in the Philippines, it was on board a Russian naval ship that Vereshchagin died.  While accompanying Russian Admiral Stepan Makarov, the Russian artist died when the Petropavlovsk struck two mines and sank off Port Arthur in 1904.

More than a century after his death, no single artist, photographer or journalist has come anywhere close to documenting wars and conflicts the way Vasily Vereshchagin did. Yet, the sheer diversity of his work is what really sets Vereshchagin apart from most artists of any epoch.