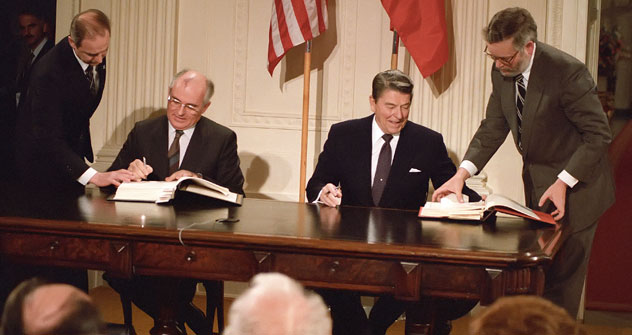 Twenty-five years ago this month, I sat across from Ronald Reagan in Reykjavik, Iceland, to negotiate a deal that would have reduced — and could have ultimately eliminated by 2000 — the fearsome arsenals of nuclear weapons held by the United States and the Soviet Union.

For all our differences, Reagan and I shared the strong conviction that civilized countries should not make barbaric weapons the linchpin of their security. Even though we failed to achieve our highest aspirations in Reykjavik, the summit was nonetheless, in the words of my former counterpart, “a major turning point in the quest for a safer and secure world.”

The next few years may well determine if our shared dream of ridding the world of nuclear weapons will ever be realized.

Critics present nuclear disarmament as unrealistic at best and a risky utopian dream at worst. They point to the Cold War’s “long peace” as proof that nuclear deterrence is the only means of staving off a major war.

As someone who has commanded these weapons, I strongly disagree. Nuclear deterrence has always been a hard and brittle guarantor of peace. By failing to propose a compelling plan for nuclear disarmament, the United States, Russia and the remaining nuclear powers are promoting through inaction a future in which nuclear weapons will inevitably be used. That catastrophe must be forestalled.

The trust and understanding built at Reykjavik paved the way for two historic treaties. The 1987 Intermediate-Range Nuclear Forces Treaty destroyed the quick-strike missiles then threatening Europe’s peace. And in 1991, the first Strategic Arms Reduction Treaty, or START I, cut the bloated U.S. and Soviet nuclear arsenals by 80 percent over a decade.

But prospects for progress on arms control and nonproliferation are darkening in the absence of a credible push for nuclear disarmament. I learned during those two long days in Reykjavik that disarmament talks could be as constructive as they are arduous. By linking an array of interrelated matters, Reagan and I built the trust and understanding needed to moderate a nuclear arms race of which we had lost control.

In retrospect, the Cold War’s end heralded the coming of a messier arrangement of global power and persuasion. The nuclear powers should adhere to the requirements of the 1968 Nonproliferation Treaty and resume “good faith” negotiations for disarmament. This would augment the diplomatic and moral capital available to diplomats as they strive to restrain nuclear proliferation in a world where more countries than ever have the wherewithal to construct a nuclear bomb.

Only a serious program of universal nuclear disarmament can provide the reassurance and the credibility needed to build a global consensus that nuclear deterrence is a dead doctrine. We can no longer afford, politically or financially, the discriminatory nature of the current system of nuclear “haves” and “have-nots.”

Reykjavik proved that boldness is rewarded. Conditions were far from favorable for a disarmament deal in 1986. Before I became Soviet leader in 1985, relations between the Cold War superpowers had hit rock bottom. Reagan and I were nonetheless able to create a reservoir of constructive spirit through constant outreach and face-to-face interaction.

What seem to be lacking today are leaders with the boldness and vision to build the trust needed to reintroduce nuclear disarmament as the centerpiece of a peaceful global order. Economic constraints and the Chernobyl disaster helped spur us to action. Why has the Great Recession and the disastrous meltdown at Fukushima Daiichi in Japan not elicited a similar response today?

A first step would be for the United States finally to ratify the 1996 Comprehensive Test Ban Treaty. U.S. President Barack Obama has endorsed this treaty as a vital instrument to discourage proliferation and avert nuclear war. It is time for Obama to make good on commitments he made in Prague in 2009, take up Reagan’s mantle as Great Communicator and persuade the Senate to formalize the United States’ adherence to the nuclear test ban treaty.

This would compel the remaining holdouts — China, Egypt, India, Indonesia, Iran, Israel, North Korea and Pakistan — to reconsider the nuclear test ban treaty as well. That would bring us closer to a global ban

on nuclear tests in any environment — the atmosphere, undersea, in space or underground.

A second necessary step is for the United States and Russia to follow up on the New START agreement and begin deeper weapons cuts, especially tactical and reserve weapons, which serve no purpose, waste funds and threaten security. This step must be related to limits on missile defense, one of the key issues that undermined the Reykjavik summit.

A fissile material cutoff treaty, long stalled in multilateral talks in Geneva, and a successful second Nuclear Security Summit next year in Seoul will help secure dangerous nuclear materials. This will also require that the 2002 Global Partnership, dedicated to securing and eliminating all weapons of mass destruction — nuclear, chemical and biological — is renewed and expanded when it convenes next year in the United States.

Our world remains too militarized. In today’s economic climate, nuclear weapons have become loathsome money pits. If, as seems likely, economic troubles continue, the United States, Russia and other nuclear powers should seize the moment to launch multilateral arms reductions through new or existing channels such as the United Nations Conference on Disarmament. These deliberations would yield greater security for less money.

But the buildup of conventional military forces — driven in large part by the enormous military might deployed globally by the United States — must be addressed as well. As we engage in furthering our Conventional Forces in Europe agreement, we should seriously consider reducing the burden of military budgets and forces globally.

U.S. President John F. Kennedy once warned that “every man, woman and child lives under a nuclear sword of Damocles, hanging by the slenderest of threads, capable of being cut at any moment.” For more than 50 years, humanity has warily eyed that lethal pendulum while statesmen debated how to mend its fraying cords. The example of Reykjavik should remind us that palliative measures are not enough. Our efforts 25 years ago can be vindicated only when the nuclear bomb ends up beside the slave trader’s manacles and the Great War’s mustard gas in the museum of bygone savagery.