Dancing the sirtaki in Gorky Park 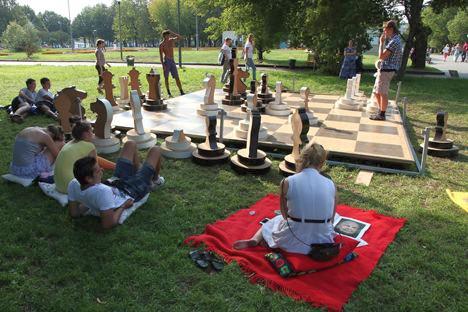 The more adventurous tourists to Moscow should leave their guidebooks in their hotels and take advantage of some of the unique experiences the Russian capital has to offer.

As a tourist in Moscow, Red Square is something you have to see. If you approach the square through the Resurrection Gates, straight ahead are the colorful domes of St. Basil’s Cathedral, to the right lies Lenin’s Mausoleum, and to your left stretches the facade of the GUM department store. But what about after that? Sure, you could follow the recommendation of a travel guide, but Moscow has much to offer those willing to travel just a little off the beaten path.

Quite a few visitors wander into the All-Russia Exhibition Center (VVTs). Located in the northern part of the city, its over-the-top structures are considered to the epitome of Soviet aesthetics. But few tourists, and even few Muscovites know that cinematic novelties are shown in the panoramic cinema on the exhibition center’s grounds. For over 50 years, the panoramic cinema has been showing films on a 360-degree screen. Often, a group of lost visitors stumble upon the showings. They sit on benches in the middle of the circular theater, bumbling through the Siberian forests in a train past men chopping wood. Once in a while the sound cuts out – and occasionally so does the picture. But the panoramic cinema experience makes up for that. It catapults visitors into a city and a country that no longer exists, completely different from the pulsating metropolis that we know today.

Life in Moscow is fast, and sometimes visitors seek a refuge from the busy city. The banks of the Moscow River can be a good choice. On warm summer nights, they transform into a dance stage. On the southern edge of Gorky Park, Muscovites of all ages gather to enjoy a rare relaxed and peaceful moment in the capital. During the day, the urbanites conceal themselves behind hardened faces, but here they let go, dancing the Sirtaki, Irish dances

And although many visitors travel through the Moscow metro, few know of the city’s other secrets hidden below the surface. One of these is “Bunker 42,” located beneath the Taganka metro stop. What secrets the inconspicuous house at number 11 held were even kept from the neighbors for 40 long years. In the 1950s, Soviet leader Joseph Stalin had four subterranean bunkers built to preserve Communism in the event of a nuclear attack by the United States. The facility contained teletype machines, and generators heated the rooms to 30 degrees Celsius (86 degrees Farenheit); today, however, visitors can expect cooler temperatures of 16 degrees (61) at 60 meters (about 200 feet) below the surface.

There are even traces of Germans in Moscow. Since the 16th century, Germans have settled in the “Nemetskaya Sloboda” (German Quarter) in the northeastern part of the city, and their legacy can be seen everywhere you look. The cornerstone for the St. Peter and Paul Lutheran Cathedral in the quarter was laid by Kaiser Frederick III. Germans made their mark in other parts of the city as well. The Red October Chocolate Factory, located on an island in the middle of the Moscow River was founded by the Germans Ferdinand von Einem and Julius Geis. Today the factory no longer makes chocolates, but is instead a popular meeting point for art and party scenes.