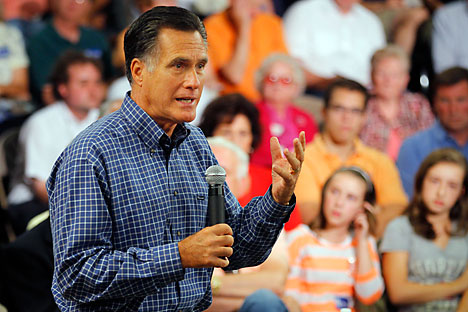 The Republican front-runner has taken an aggressive stance on Russia in his campaign speeches, but will it translate into policy in a Romney administration?

In the summer of 2007, “Foreign Affairs,” an American magazine specializing in international relations and U.S. foreign policy, offered its pages to candidates for the 2008 U.S. presidential elections. In the July/August issue of the magazine, Mitt Romney, introduced as “governor of Massachusetts from 2003 to 2007 [and] a candidate for the Republican presidential nomination,” took this offer to outline his foreign policy views. Incidentally, neighboring Romney in the printed space was Barack Obama, “a Democratic senator from Illinois and a candidate for the Democratic presidential nomination.”

Back in 2007, Romney was promoting himself as the only serious Republican candidate with a successful corporate career. This was reflected in the way Romney presented his foreign policy bona fides: His “Foreign Affairs” piece read like a business plan – a list of steps a Romney administration would take to confront the challenges facing the nation. While strongly advocating increased spending on national defense (he actually used the term “investment”), Romney, for example, promised to reduce the waste of defense dollars by hiring “a team of private-sector leaders and defense experts” to scrutinize military purchasing. Of course, Romney had done his homework. He professed unconditional love for Israel, and his list of challenges to America's interests around the world included all usual suspects: Iran, Hugo Chavez, and "the economic rise of China." Interestingly, in a long, almost 5,000-word, piece, Romney mentioned Russia only once – in the quite benign context of U.S. energy independence: “…we [should] end our strategic vulnerability to oil shutoffs by nations such as Iran, Russia, and Venezuela,” Romney wrote.

Fast forward to Fall 2011. Romney is running for president again, but this time he’s no longer just “a candidate” for the Republican presidential nomination – he is a frontrunner. As such, Romney prefers not to argue with fellow presidential hopefuls; rather, he is bringing the fight directly to President Obama’s doorstep. So when time came to challenge Obama’s foreign policy, the venue was not an article in an “academic” magazine; it was a speech at the Citadel, a military college in Charleston, S.C. The date of the speech – Oct. 7, the 10th anniversary of sending U.S. troops to Afghanistan – doesn’t appear coincidental, either.

Calling for a new “American Century” and promising to “never, ever apologize for America” – which, as Romney asserts, President Obama does all the time – Romney blasts “the feckless policies of the past three years.” He blames the current president for the loss of American leadership in the world and the lack of “clarity of American purpose and resolve,” which, in Romney’s opinion, has made the globe “a far more dangerous place.”

The topic of Russia came rather early in the Citadel speech. Describing to prospective U.S. military leaders the uncertain world America will be facing in the near future, Romney preached:

“Russia is at a historic crossroads. Vladimir Putin has called the breakup of the Soviet empire the great tragedy of the 20th century. Will he try to reverse that tragedy and bludgeon the countries of the former Soviet Union to submission, and intimidate Europe with the levels of its energy resources?”

The question that Romney is posing is no more than oratorical trick, for just a few minutes later, he explicitly identifies “a resurgent Russia, led by a man who believes the Soviet Union was great, not evil” as one of “powerful forces that may threaten freedom, prosperity, and America’s national interests.” No less. Incidentally, the origin of this bold Soviet Union claim isn’t all too obvious, so if President Putin has a chance to meet in the future with President Romney, he may ask for a direct quote.

Having delivered the Citadel speech, Romney wasn’t done with Russia just yet. The same day, he gave an interview to the “Washington Post”’s Russophobe-in-residence, Jennifer Rubin. In the interview, Romney spoke of Putin’s plans “of rebuilding Russian empire” using, as Romney sees it, “annexing populations, as they did in Georgia.” This sounds awkward: Usually, it’s territories that are annexed, not populations. And when asked by the ever-helpful Rubin what he would do with the “reset,” Romney didn’t mince words: “It has to end.”

It would be premature, however, to conclude that Romney’s current position vis-à-vis Russia, hostile as it may appear, will necessarily translate into explicit anti-Russian policies of his prospective presidency. Romney’s self-proclaimed status as the major Republican opponent to President Obama forces him to use every opportunity to criticize the Obama Administration. While criticizing the White House’s economic policies is easy given the status of U.S. economy, it’s much trickier to challenge Obama’s foreign policy. The fact is that in many respects, the Obama Administration’s current foreign policy discourse isn’t much different from that of his predecessor. And this poses a problem for Romney because his new “American Century” proposal is a slightly disguised version of the George W. Bush Administration’s “us-vs.-them” approach.

Obama’s policy of “reset” in U.S.-Russia relations is perhaps the only area where Romney can see a clear deviation from the policies of the Bush era. Romney therefore attacks the “reset” because there is not much else to attack.

It remains to be seen whether the newly acquired aggressive streak in Romney’s foreign policy views will eventually prevail, or if he will instead gradually return to the more pragmatic approach he adhered to in 2007. It remains to be seen, too, which effect Romney’s choice of Leon Aron – a prominent Russia expert from the American Enterprise Institute – as his Russia advisor will have on his presidential campaign.

It may well happen that at certain point of his presidency, should it materialize, Romney will realize that having Russia as a partner serves American national interests better than having it as a foe. And who knows: Romney may decide to meet with Putin and look into his soul? And make no apology for that.