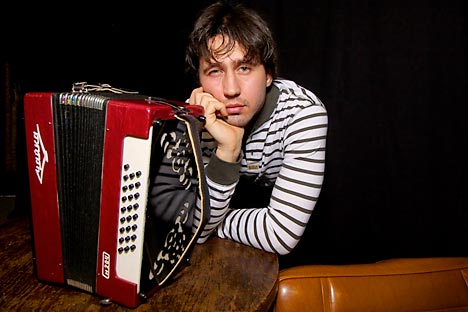 First Igor Rasteriaev learned how to play the guitar, but later turned to button accordion

A singer-songwriter who rose to fame on the Internet reinvents Russian patriotism with his songs.

Watching his videos on YouTube, you might get the impression that Igor spends all his days driving a tractor across endless expanses of Russian fields and consuming glasses of Russian moonshine, after which he picks up a traditional Russian accordion and sings songs about village life and the Great Patriotic War. All that’s missing in this picture of a real Russian guy is a fur hat with earflaps. But the story of Igor Rasteryaev, who shot to fame after a cell phone video of him was posted on the Internet, is not as simple and banal as it may seem at first.

Halfway between the city and the village

Although Igor does sing about the realities of rural life, he only lives in the country during the summers – something Igor himself defines as having “dual citizenship.” Rasteryaev was born into a family of artists in St. Petersburg and has lived there ever since. He graduated from drama school and has been involved with musical and drama theater for eight years now. Before becoming famous, he played parts in children’s productions – mostly as a crocodile.

“At the outset of each show, I had to explain who I was,” he recalls with a smile. Even today, he doesn’t take the leading role, but rather the character parts. “I’ve played a beatboxer, drunks, but my forte is absolutely soldiers,” Igor admits with a mischievous glint in his greenish eyes.

Despite his outward calm and poise, under the surface you can sense the presence of a serious temper – something he must have inherited from his father’s Cossack ancestors. As a child, Igor spent every summer in the village of Rakovka near Volgograd, and he returned there this year to celebrate his 31st birthday. He pulls out a somewhat battered cell phone to show videos from the summer: Igor, looking tanned, is holding an enormous fish. “Nothing special, it just weighs 40 kilograms [88 lbs],” he explained.

There isn’t a single person in Rakovka who hasn’t heard Igor sing; he has been seen playing in his friends and relatives’ yards for many years. It was with a guitar at first, but that was later replaced by a button accordion – a present at the age of 18 from a classmate, who taught Igor to play it. “Truth be told, our national instrument is a folk-button accordion and not a balalaika, as foreigners often believe,” he said. Igor has as many as five of them. He never received any regular musical training, but learned the basics himself. “How hard can it be?” he added, in explanation.

Igor always returned from his summer vacation with a load of different stories, some of which he put down on paper. He actually planned to write books, not songs. His first book, “Faces of Volgograd,” was published in 2004 in Germany. It consists of short stories and sketches on country life, with Igor’s own illustrations. He has been working on his next book for seven years already. “It’s high time I finished it,” he said wistfully, taking a sip of a traditional non-alcoholic Russian beverage called sbiten. Igor does not drink alcohol or smoke, but in his song “Romashki (Daisies)” he commemorates two young village boys who died of alcohol abuse: “So there’ll be no homes or jobs, so that there’ll be bottles and shots, so that instead of Vasya and Roma only cornflowers and daisies will grow.” Rasteryaev sings about Russia in a way no one has for a long time. Quite possibly, this is the reason for his success, which even Igor himself cannot explain. You even get the impression that he is uncomfortable with his sudden popularity.

Songs about people who don’t exist

Igor had nothing to do with posting his eventual hit song about Volgograd tractor drivers on the web.

“It’s an old song, from 2009. All my friends have known it for a long time.” One of them used their cell phone to record a video of Igor singing it and posted it on YouTube. The video shows a slightly disheveled Igor playing the button accordion in his own kitchen with an authentic bottle of sunflower oil in the background.

“Far away from the big cities, where there aren’t any expensive boutiques, there’s a different kind of people, whom nobody sings about,” the lyrics say. “No TV series about them are made since they don’t fit the format, and there’s no mention of them on the Internet; it’s as though they don’t exist.”

Many contemporary “stars” would be wise to learn from Igor’s sincerity – an opinion his fans share. “You write like you live, and you live like you write,” is feedback he often gets on the web.

“I just do what I can. I write about what I see,” said Igor. His songs and his image are patriotic to the core, but Igor says that he has never thought about what patriotism actually is until this summer. “This summer I passed by places in the Volgograd region where my ancestors used to live,” he said, thoughtfully. “They are now deserted and devastated. You might even think an enemy shelled them. Everything is broken down. I was crying as I rode by them on my motorbike. Maybe that is what patriotism is?”

Rasteryaev’s song about World War II, “The Russian Road,” has topped Russia’s music charts for several weeks now. But Igor is reluctant to sign contracts with record labels. He values freedom more than money or popularity. When the chairman of the Federal Agency on Youth Affairs approached him with an offer to make a professional video for his hit song “Combiners,” Igor agreed, but later regretted it: “The musical adaptation was so cheesy, so trivial. It was not me at all.” He says of his work: “I can only be creative and in general live when I am not bound by anything. An easily predictable future is what scares me most. I need to constantly feel like I’m breaking inside, I need to feel chaos inside me. I need the ice floe where I am standing fishing to have a small, vital crack.”