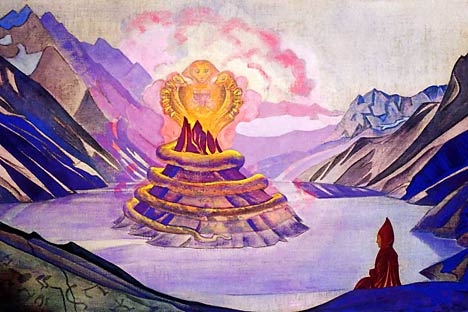 The birthday celebrations of Nicholas Roerich in the picturesque Kullu Valley has become a sacred meeting ground for admirers of the Russian visionary painter and lovers of art and culture. The stage is now set for even grander celebrations at the 20th anniversary of the Roerich Estate in 2012.

The birthday of Nicholas Konstantinovich Roerich is always a special moment in the Kullu Valley, also known as the Valley of the Gods and spiritual home of the visionary Russian painter-philosopher. The annual Roerich festival has become a landmark of sorts, spreading its festive cheer and spiritual radiance all around in this western Himalayan town.

The three-day programme of festivities early October, organized by the executive director and curator of the International Roerich Memorial Trust (IRMT), Alena Adamkova, was varied. It began with an exhibition of drawings culled from the works of Russian and Indian children; some of these children were winners of a competition held in Russia by the public organization Dostoyanie, others were local kids from the Helena Roerich College of Art. The themes for the contest were suggested by two famous anniversaries this year: the 50th anniversary of the world’s first flight into space by Soviet cosmonaut Yuri Gagarin and the 150th anniversary of the birth of Indian writer Rabindranath Tagore, winner of the Nobel Prize (1913) in literature.

Hundreds of residents of Naggar and nearby cities and villages as well as guests from different corners of India and abroad gathered at the Roerich Estate on Oct 9, Roerich’s birthday. The tone of the celebrations was set by Indian spiritual leader Amar Jyoti Yogiraj, a long-time supporter of the IRMT.

By tradition, the day began with a Prayer for Peace (Shanti-pooja) at the memorial stone on the grounds where Roerich was cremated, under the lindens planted by this remarkable Russian family who lived some 20 years in the Kullu Valley. On the little square by Roerich’s house-museum three flags were raised: the Russian flag, the Indian flag and the famous Flag of Peace. In the exhibition hall, guests were treated to an exposition of paintings (Dreams of India) by eminent Russian artist Pyotr Toropov. The paintings were introduced by Marina Kartopolova, the collector and artist from Riga (Latvia). An unexpected present for visitors was a painting that she brought to Naggar especially for the festival: N.K. Roerich’s Rus. Painted in 1930, it is now part of the personal collection of Kartopolova, a long-time admirer of Roerich. Many famous artists from India and around the world consider it an honour to show their works at the Roerich Estate. A new exhibition is held almost every month. In the last nine years, the estate has hosted more than 110 art openings.

The estate’s open-air theater featured the festival’s key event. Minister-Counsellor of the Russian Embassy in India Denis Alipov gave high marks to the Memorial Trust for preserving the legacy of Roerich in India and putting his ideas into practice. He stressed that the Russian side would continue to help turn the Roerich Memorial Trust in Naggar into a world-class cultural and educational center.

Festival guests were shown the latest publications by the Trust which considers the popularization of philosophical and literary works by Roerich, his wife Helena Ivanovna and their sons Yuri and Svyatoslav to be one of its most important missions. In the last ten years the Trust has published some 30 books, albums and reprints. A recent addition was a unique bi-lingual (Russian and English) edition of the only play Roerich ever wrote, Miloserdie (Mercy). The Trust has also recently produced a long-awaited set of postcards showing interiors of the Roerich house-museum, where the artist-philosopher and his family moved in the late 1920s. Both these publishing projects were underwritten by AFK Sistema and MTS India.

The concert programme was opened, as always, by masters and students from the Helena Roerich College of Art. Students sang songs in Russian and English. They also teamed up with Brazilian musicians to sing and dance a Brazilian samba. The Russian dance ensembles Obraz (from Kaluga) and Raduga (from Voronezh), which had come to India on tour as part of the Third Himalayan Expedition (organized by the creative association Dostoyanie in cooperation with Rossotrudnichestvo), presented various choreographic compositions as well as fiery Cossack and Gypsy dances. A quartet of young dancers performed the famous Russian Barynya and other songs. Also performing was the accordionist Evgeny Kunakovsky, a winner of many international competitions and festivals.

This year’s festival was also attended (for the third time) by representatives of Brazil’s Roerich Institute of Peace and Culture. But for the first time they brought with them performers who acquainted festival guests with popular Brazilian music and dances as well as the famous Brazilian martial art (capoeira), which includes elements of theater and rhythmic dance. A capoeira master and his student also held a master class for children from Naggar.

The celebrations concluded with a gala performance of the famous song Solnechny krug (Circle of Sun) in three languages — Russian, English and Hindi. Everyone sang: performers and audience alike.

October 10 saw the traditional meeting of members of Roerich societies and cultural organizations. More than 20 representatives from different countries shared the work experience of their societies in the modern, rapidly changing world. In the opinion of the Memorial Trust’s executive director and curator, Alena Adamkova, these meetings are very important for purposes of understanding the priorities in the work of Roerich societies in various countries; sorting out their problems, aims and goals; as well as for uniting people working in the field of culture, art and education.

For residents of the Kullu Valley the festivities at the Nicholas Konstantinovich Roerich Estate act as a bridge to the world of culture. The estate is a place where one can come into contact with the scholarly, spiritual and cultural legacy of the Roerich family. Festivals of this sort are held several times a year. Thanks to the efforts of the IRMT, founded by Svyatoslav Roerich in 1992, the estate in Naggar has become one of the much-talked about tourist attractions of the Kullu Valley and all of Himachal-Pradesh. Every year the estate receives some 80,000 visitors. Hanging in the picture gallery are 49 original works by Nicholas Roerich and his son Svyatoslav Roerich. The museum complex is rightly considered one of the unique achievements of world culture. Since 2010 the house-museum has functioned under the honorary patronage of the Co-Chairmen of the Russian-Indian Inter-Governmental Commission on Trade, Economic, Scientific, Technological and Cultural Cooperation. In 2012 the Roerich Estate will celebrate its 20th anniversary as a public institution. “This is a very important event for which are doing everything to prepare,” said Adamkova, who was awarded the 2010 Order of Friendship for her tireless efforts to develop Russian-Indian cultural ties. “In the last ten years many positive changes have taken place. A number of buildings were built, including a theater, a hotel for IRMT guests, and a hall for seminars and exhibitions,” she said. “The Himalayan Research Institute was restored. Our picture gallery is now equipped with a state-of-the-art security system which protects every individual painting around the clock regardless of any electrical failures. This security system will soon be made even better. As well, we have installed humidifiers throughout the picture gallery and house museum. And a professional inventory has been made of the museum’s holdings using bar codes.”

In 2003, on Adamkova’s initiative, the Helena Roerich College of Art was created. Today it has more than 150 students, children from all over the Kullu Valley. The only educational institution of its kind in the Himachal-Pradesh, the college has six departments: Indian classical music and dance, studios for painting and traditional woodworking, weaving and theater arts. In 2011 the college began construction on a new building which will house and international academy of arts.

The decision to found the Roerich International Academy of Arts was announced in 2003 by India’s then Prime Minister Atal Bihari Vajpayee. The first foundation stone was laid at a special ceremony in May 2011 by Russian Ambassador to India Alexander Kadakin and Prem Sharma, head of the Himachal-Pradesh government’s department of culture. Kadakin is a life trustee and vice president of the IRMT. He was personally acquainted with Svyatoslav Roerich and his wife, the former Indian film star Devika Rani Roerich. He has actively participated in the work of the Trust for more than two decades.

For the Trust’s 20th anniversary in 2012, plans have already been approved for an international competition for a statue of Nicholas Roerich to be placed on the estate.

As any visitor to Roerich’s estate in Naggar can see, the Memorial Trust has a unique role to play. It acts as a bridge connecting Russia and India and the peoples of these two great countries. Anyone planning to travel to the picturesque Kullu Valley in the Himalayas is urged to visit this truly holy corner, this place devoted to Knowledge, Beauty and Culture.

Sergei Yakovlev is Member of the Roerich Society of Estonia