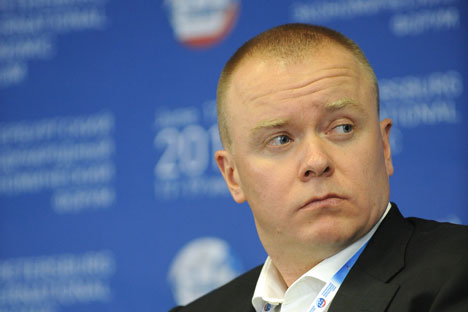 Anton Rakhmanov, managing director for asset management at the Moscow investment bank Troika Dialog, is no stranger to the field of money management; he has been working in the industry for more than 15 years. He recently sat down with Nikita Dulnev to discuss why Russia is underrated as an investment destination. Rakhmanov says that domestic capital market stability is needed to attract long-term, serious investment into Russia.

RIR: What sectors of the Russian economy do you think are most undervalued?

Anton Rakhmanov: The Russian market is currently the BRIC countries’ cheapest. Compare Russia’s P/E [price/earning ratio] of 6 with Brazil’s 8.5, China’s 15, or India’s 14. The most undervalued companies are found in Russia’s traditional industries, such as oil and gas, metals, and mining. Even the consumer goods and tech sectors don’t look so cheap in comparison. Why is the Russian market such a good value compared to the others, including the BRIC? Because Russia, unfortunately, hasn’t been able to kick its oil habit. This makes for extremely high macroeconomic risks.

Another problem is that the current price of oil is out of whack with supply and demand. Most likely, investors don’t understand what the fair value of “black gold” really is amid the uncertainty over money issues by leading central banks, in both the U.S. and Europe. It’s obvious that, if the situation keeps deteriorating, the treatment that will most likely be prescribed by the monetary authorities for the developed economies will be to print more money. This is making commodities one of the few instruments investors still invest in. A bubble is being inflated. As a result, it is very difficult to quantify the investment risks inherent in Russian stocks; it’s unclear how low oil prices would drop once out-of-control money printing stops and the developed world slips into recession.

Stimulating domestic demand and establishing a serious domestic market for capital, which would act as an internal investor and stabilize the market situation, may serve as a catalyst for change. Of course, this also includes pension reform. If pension savings are invested more actively, including in the real sector of the economy, they would become an obvious source of domestic market stability. Once we see that the U.S. is not slipping into recession and Europe is successfully sorting out its internal problems, risk premiums built into current stock valuations in both emerging and developed markets should gradually disappear. Russia will certainly feel much better then. Granted, it still won’t be the leader in the BRIC group but it would start to catch up.

RIR: Third-tier stocks are considered to be the most profitable yet risky both in the West and in Russia. How actively are foreign investors investing in those instruments on the Russian market?

A.R.: Not at all. This must be a result of a diminished appetite for risk, since the second and third tiers are considerably less liquid, so the risks tend to be greater. The performance of the relevant indices clearly shows as much: the RTS Index has lost 6 percent year-to-date, while the RTS-2 is down 13 percent. A paradoxical situation has emerged. On the one hand, the Fed is engaged in serious money printing, making it clear that the U.S. has a vested interest in the dollar’s devaluation in order, first of all, to reduce its foreign debt and, second, to improve the competitive position of America’s export industries. But all investors are still fleeing to the dollar, particularly by scooping up U.S. Treasuries.

In fact, there is no alternative to dollar-denominated instruments under the current circumstances. The leading central banks, irrespective of their attitude towards the dollar, will be holding the lion’s share of their assets invested in such instruments because they need liquidity. So Russia’s third tier, in its capacity as a non-liquid financial instrument, will remain undervalued until both domestic and external investors’ appetites for risk improve. Under the current circumstances, only second- and third-tier stocks with an intrinsic history will be in demand, such as large potential dividends, or a buy-back process, or an M&A.

RIR: [Russian exchanges] MICEX and RTS plan to merge by the end of the year. What effect will this have on trading participants, especially foreigners?

A.R.: In theory, a united stock exchange should be good news, as it would provide deeper liquidity and be able to implement new and advanced technology faster. I hope very much that everyone will benefit from the merger. There won’t be a lot of foreign players though, as the quantity and quality of international participants is determined by the current macroeconomic situation in the country. Big foreign pension funds and big capital won’t come rushing into Russia until they see reasonably serious and qualitative changes taking place in our country. As I have said before, this requires establishment of a stable domestic capital market. Volatility has to subside.

RIR: What instruments do you believe the Russian market is critically lacking?

A.R.: It’s not any particular instrument that is lacking; it’s market capitalization and, especially, domestic capital – although I wouldn’t deny that liquid derivative instruments are also in short supply. Several steps need to be taken to resolve this problem. First of all, the legislation should be amended. Operations with derivatives should be regulated and spelled out in technical detail. Demand for those derivatives also needs to emerge. The legislation should allow stock market players, including mutual and pension funds, to invest in derivatives to generate actual investment demand for futures and options rather than simply leaving it all to speculators. It is possible, even now, of course, to try and offer the market a sufficiently sophisticated derivative instrument, except that it won’t find any takers. This would be an equivalent of selling Bentleys in the Sahara.

RIR: How do foreign investors view the Russian economy in general? Do they consider it a phenomenon in its own right or just another emerging market, like China’s or India’s? Or perhaps even a developed market?

A.R.: Unfortunately, in most cases, Russia is perceived as a country with a not very efficient commodity-based economy, complete with operating and investment risks. If investors had considered the Russian economy a unique phenomenon, it would have been trading at a premium rather than at a discount compared to other emerging markets. It appears that there are no macroeconomic conditions today for long-term and serious investments to come into the country.

Russia has always been and remains hostage to the global situation. It so happens that, whenever instability increases on the global markets, Russia’s risks increase exponentially. The problem is that Russia has done next to nothing to establish and sustain development of the domestic market and consumer demand, something that China has been doing rather successfully and that Brazil has recently embarked on. Furthermore, Russia has yet to learn how to control domestic public spending: While it keeps increasing, the social and economic situation remains as deplorable as ever. Almost all social sectors, including education and healthcare, are underinvested. The ranks of public servants continue to expand, having almost tripled over the past seven years. All this comes down to a rather simple thing: the federal budget is balanced as long as oil costs $115 [per barrel].

RIR: How big is the percentage of Asian investors among foreigners investing in the Russian market? What sectors do they prefer?

A.R.: While there are no hard numbers, their share is not that large, although the first IPO of a Russian issuer, Rusal, on an Asian exchange was certainly a success. China has the greatest investment potential among Asian countries these days. There are two kinds of investor there: the state and the corporations. The People’s Bank of China and the country’s Treasury are among the world’s biggest investors after the U.S. Federal Reserve. The state is followed in importance by Chinese corporations, and then by individuals. The problem is that individuals are prohibited from investing outside China, which leads to periodic bubbles there, both on the stock market and in such sectors as real estate. Individual wealth is growing quite dramatically, without an adequate supply of alternative investment offerings on their domestic market. As far as corporate and sovereign investors are concerned, they are more interested in private equity. Asian investors think outside the portfolio investment box: they understand buying an asset to hold it and to be able to exercise operational control over it, but they don’t see how it’s possible to buy 10% of a company’s stock. This strategy is at work in Africa, for instance.

I think Russia underestimates the importance of potential cooperation with China as it aligns itself more and more with Europe. China, however, is a fully-fledged and growing partner. The Chinese economy is short of fuel, coal, ore, cement, and electric power. They are looking for replacements procured via imports. The Asians’ investment mentality is that the needs of their own economy come first. Asian economies are more or less similar to one another. They import and consume basic natural resources and export finished goods. Some of them, such as Indonesia and Malaysia, are exporters of agricultural products.

RIR: Who does the Russia-Singapore Business Forum mostly attract: is it a bilateral, a regional Asian, or an international gathering?

A.R.: The forum attracts both businesspeople and government officials from Russia and the Asian region. But even more important than its participants are the matters that it can and does discuss. If we have ambitions to turn Moscow into an international financial centre, the forum should become a venue for ranking Russian officials to promote Russia’s investment appeal. The forum’s international status and its location in one of the world’s fastest growing regions provide an excellent opportunity for this.

RIR: What is your assessment of the economic impact of the Russia-Singapore Business Forum?

A.R.: In theory, this event may be very useful for Russia. First of all, the forum provides an opportunity for businesspeople to communicate with potential partners and counterparts in a reasonably efficient format. Second, this event opens up a lot of avenues for Russian officials to demonstrate their readiness for dialogue and for creating a more comfortable environment for Asian businesses willing to work in Russia. We need to do a reality check: Most businesses that wanted to come to Russia from Asia or vice versa have done so on their own. And cooperation with Asian partners is extremely important for our country. We should have realized by now that new growth points have emerged in Asia and diversification of economic partners is only natural. So, if we do everything right, the forum’s economic impact on Russia will be very substantial.

RIR: What do you expect from the upcoming forum for yourself: contracts, communication, decisions?

A.R.: We have a rather packed schedule of meetings with clients and potential business partners. Once again, the Asian region is extremely important today. We are fully aware that competition in Europe across all areas – global markets, investment banking, or asset management – is huge. It is a very old industry there, with a serious concentration of asset managers. Asia, on the other hand, is a virgin land where the financial services industry is only just beginning to establish itself. Plus, colossal wealth is currently flowing from Swiss to Asian banks. This is caused, among other things, by the fact that the concept of banking secrecy has been losing its meaning in Switzerland.

In fact, we are witnessing the birth of major new financial centers. And it’s not limited to a reflow of capital from places like Europe. We are observing tremendous growth of wealth in the Asian region itself, and this needs to be invested somewhere. Investors will, by definition, be seeking geographic diversification and international projects. Troika Dialog, as a leading institutional provider of financial services in Russia and the CIS, is best positioned to offer its expertise to Asian investors.